Within automotive history, there are certain nameplates that stand out as truly great. They're iconic and legacy-making machines that, even if discontinued, have managed to stand the test of time. The very best are still in production today in one form or another, and an example of those is the Chevrolet Corvette. 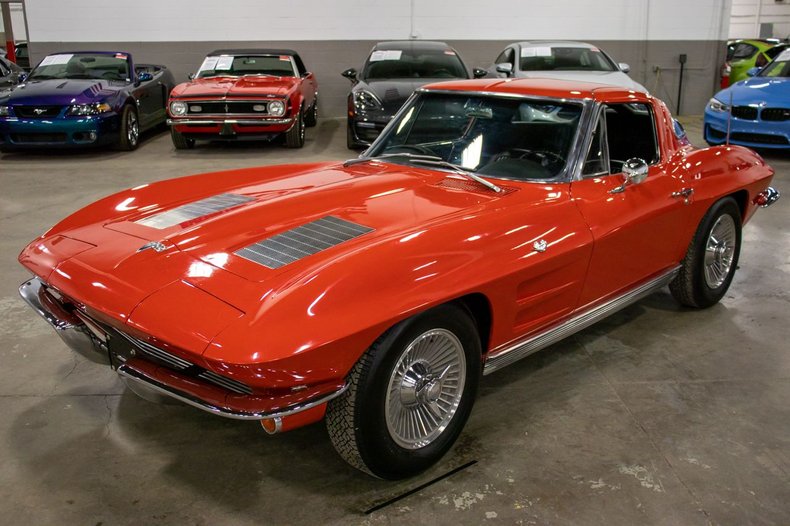 Below is a brief history of the 1963 Corvette, which was the first model year of the classic second-generation Chevy Corvette sports car. This model year, among most others, can often be found at most classic car museums.

Initial Development of the 1963 Chevy Corvette

The 1963 Chevy Corvette was the first production model of the second generation, known as C2. It was also the first time the Corvette was given the name Sting Ray, which in 1968 was contracted to a single word: Stingray. The Stingray name stayed until the fourth generation arrived in 1984, and was brought back for the seventh generation in 2014.

Returning to the 1963 Corvette, its design heritage included 2 main elements, namely the Q-Corvette and the racing Sting Ray designed by veteran GM designer Bill Mitchell. Mitchell is also responsible for the first 5 generations of the Cadillac Coupe DeVille. Taking these elements in hand, GM designers and engineers continued thinking about how to apply these concepts to mid-mounted engine cars like the Corvette C2. 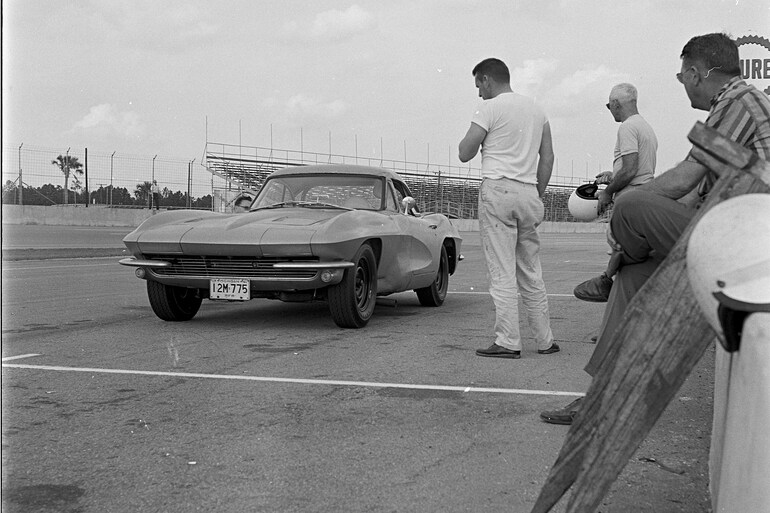 A race car concept was developed in 1957 called the XP-64 and became the main ancestor to the model that would be known as the 1963 Corvette. It was this that evolved into the XP-87 race car project led again by Bill Mitchell. In 1959, after some further evolution of XP-87, a new project called XP-720 created the first model of a car that closely resembles the C2 Corvette.

The main idea for the 63 Corvette never really changed from its original 1953 concept: a 2-seat sports car with a fiberglass body that could deliver superlative power and appealing style all at once. The main question was how to differentiate it. After all, it was a new generation, so it had to have new features. The new features, found below, have remained so loved that this model of the Corvette will most likely never be considered an affordable classic car.

The main improvements brought to the 1963 Corvette included an entirely new frame, a new nose with popup headlights, and a two-piece rear window. That last feature became one of the truly defining images of the 1963 Corvette. It was specifically ordered by Bill Mitchell to highlight the spinal ridge that ran like a bulge, dominating the rear end of the vehicle. 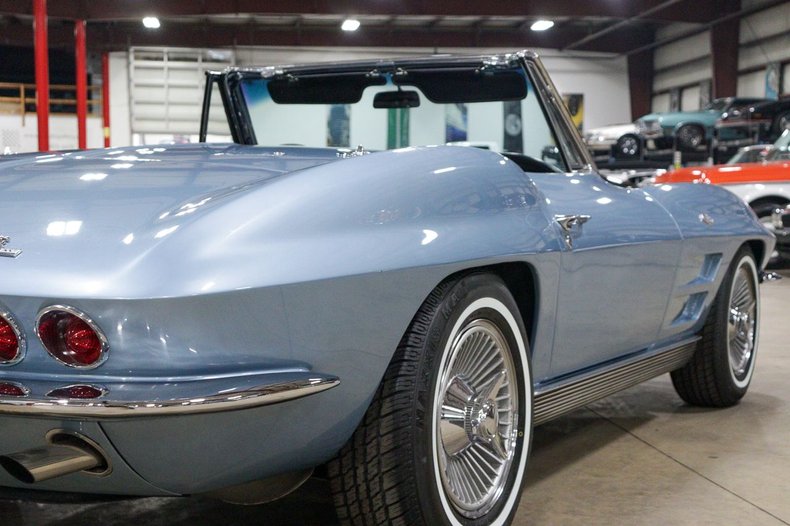 As you move closer, you start to see more interesting design details, such as the fact that the doors are cut into the roof of the vehicle, which make getting in and out of it much easier. There was also no trunk lid (a common feature of the Chevrolet Corvette until 1998) despite there having been some discussion about making the C2 a hatchback like the Jaguar XKE. Beyond that, the hood was dominated by the fake hood vents, the hidden headlamps, and their rotating housings. This was a feature not seen on any post-war American car up to that point.

The headlights and the fake hood vents were all meant to be part of the car’s overall aerodynamic efficiency, along with the optional side-mounted exhaust, and of course the general shape. On-road performance was also greatly aided by the brand-new steel ladder-type frame which replaced the X-brace. 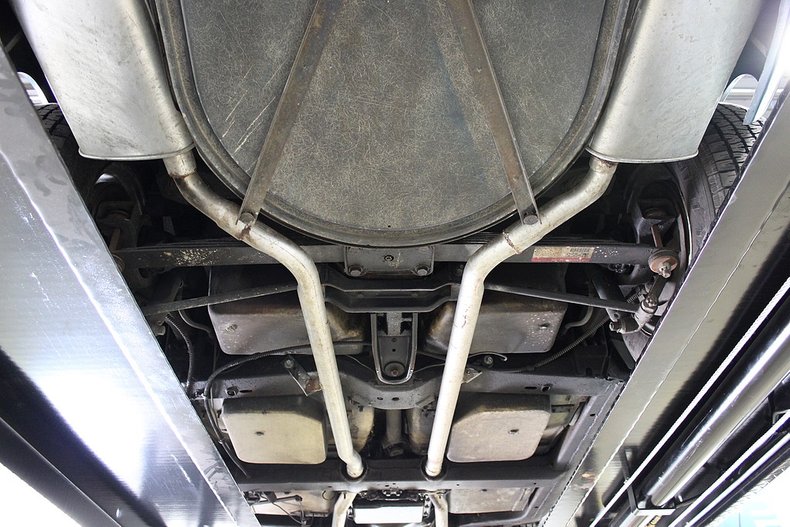 The steel frame provided a lower center of gravity, which also placed more weight over the rear wheels. As for the traditional fiberglass panels, they had to have their thickness reduced to offset the additional weight of the frame. All of these exterior features combined make this an extremely sought-off model of classic Corvettes for sale.

The C2 wasn’t just new on the outside, it also offered a completely refreshed and renewed interior. Arguably the most noticeable feature was the redone dashboard that now featured better gauges that were easier for drivers to read. On top of that, Chevy installed a cowl-ventilation system, a much better heater, and a new door for the glove box, which still served as the only main storage unit for personal items. 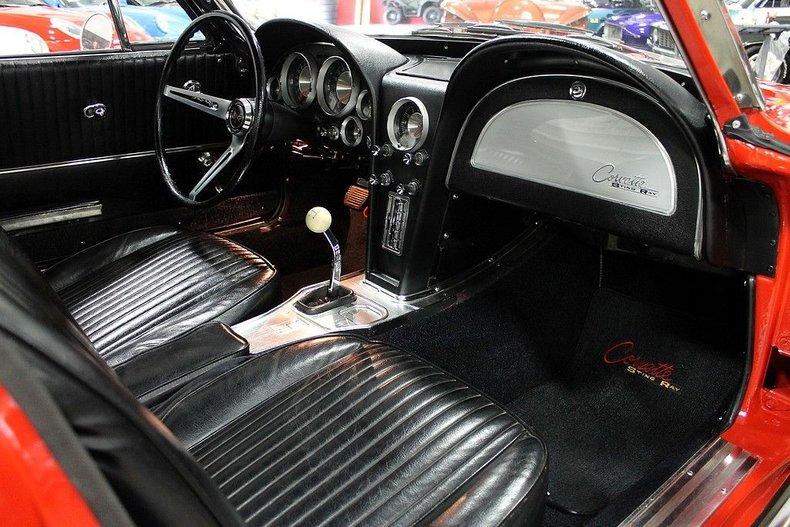 There was no trunk in the 1963 Corvette, which remained the standard until 1982. The main storage for larger items, was behind the driver and passenger seats. One additional option for this model was the Delcotronic electronic ignition system that had only first appeared on some Pontiac models by 1963.

Every 1963 Chevy Corvette came with a 5.4L (327 cubic inch) small-block V8 engine that delivered up to 250-hp as the standard output. There were optional variants of the same engine that could get up to 360-hp at the top-end, with 300-hp and 340-hp in between. This was impressive at the time until the 1968 Corvette L88 came around with well over 500-hp, becoming a stand out classic muscle car.

The Z06 variation of the C2 Corvette was created as a higher-specification racing model. It featured a fuel-injected version of the 327 cubic inch engine unit paired with a 4-speed transmission and a limited-slip differential. Only 199 Z06 models were created, with those for long-distance races like the Daytona 250 having a 36-gallon fuel tank added. 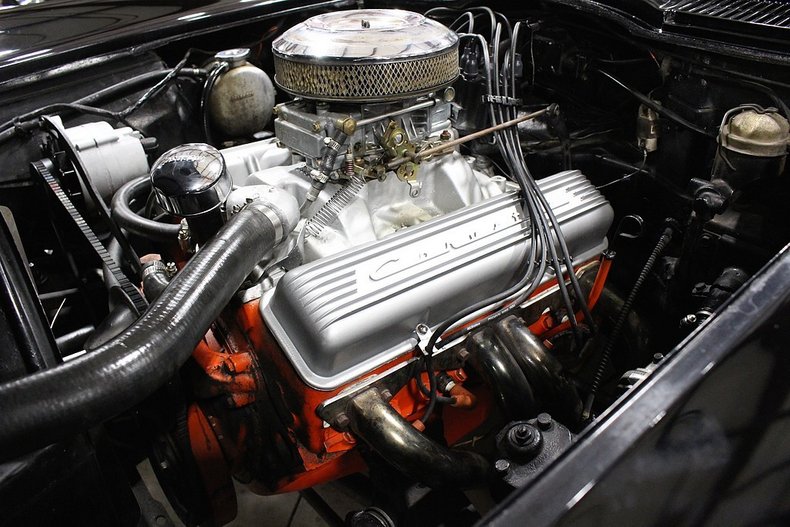 The Legacy of the 1963 Corvette

To this day, the 1963 model is still one of the best classic cars ever made, mostly for the truly unique split rear-window design. Armed with its legendary name, the Sting Ray, it would set the standard and design philosophy for generations of Corvettes that came after it. This Corvette model and the 1957 Bel Air still remain as some of the more popular vehicles that Chevrolet has ever produced.