When you think of America and what cars are at the pinnacle of excellence, there’s very few who wouldn’t mention the Chevrolet Bel Air. This iconic and unforgettable Chevy was built from 1950 to 1975 as a classic muscle car, both hardtop and convertible. The 1957 Chevy Bel Air, still known affectionately and simply as the ‘57 Chevy, was the last model year of the second generation before the car became longer and heavier in the third generation which started in 1958. It's rare to find any enthusiast who wouldn't have this car in their top classic cars of all time list! 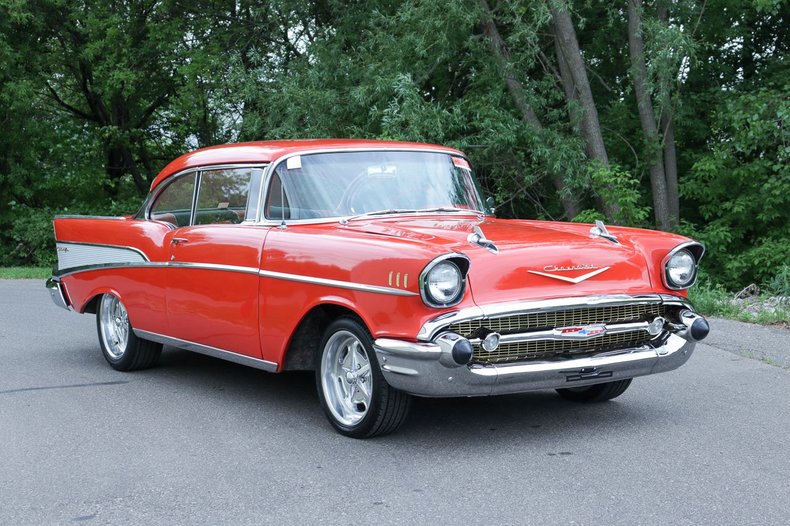 The ‘57 Chevy came in several different body styles, namely: convertible, sport coupe, sport sedan, 4-door sedan, 2-door sedan, the 2-door Nomad wagon, and the Townsman 4-door station wagon. The first model in the second-generation Bel Air was the 1955 model, which had already received great reviews from various automotive publications. It was especially praised for its handling and on-road acceleration.

The ‘57 Chevy Bel Air saw an increase in the car’s engine power with a 283 cubic-inch (4.6L) V8 engine option that was actually one and the same with the same model-year Corvette. This V8 could generate up to 283-hp and 290 lb-ft of torque thanks to the inclusion of the Rochester Ramjet continuous mechanical fuel injection system. If you own a ‘57 Chevy with this specification, check out our classic car value guide because you have something rather special because this new engine specification wasn’t installed on the majority of ‘57 Bel Air models.

Paired with that first-time ultra-powerful engine was a 2-speed Powerglide transmission, or a 3-speed manual transmission, which was some of the most dynamic and sought-after auto equipment of its day.

Most important to understand about the second-generation models, and especially the 1957 Chevy Bel Air, is that these were designed with some of the most iconic features, like the Ferrari-inspired front grille, the rear tail fins inspired by the new age of jet engines in military aircraft, the rocket hood ornaments and the chrome headliner bands on the hardtop models. What it represented was the rising prosperity of the United States and the end of an era of austerity where cars were strictly functional. 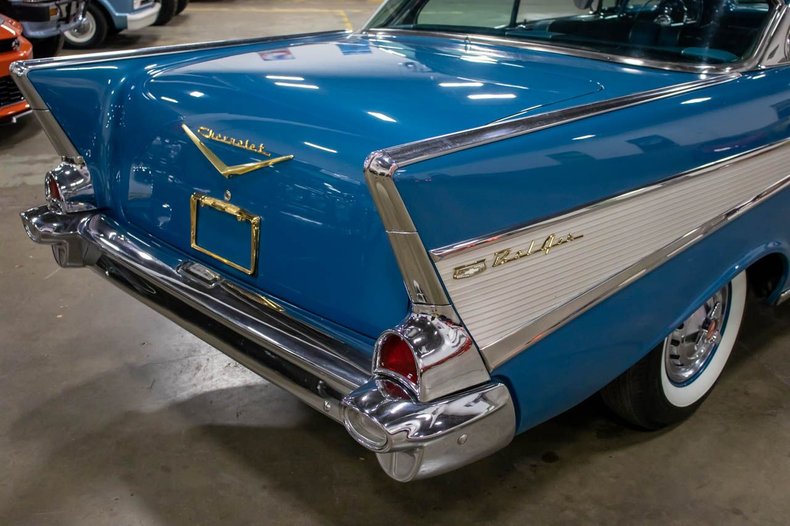 The 1957 Bel Air had just as much chrome and fine finishing as a Cadillac Coupe DeVille, but also had much more pleasing lines with an irresistible dynamism that made it the original Chevy high-end car. Suprisingly, the 57 Bel Air is a fun time when it comes to classic car care. The somewhat unfortunate thing is that like many cars from the time, Chevrolet didn’t even know how good a thing they had made until much later. The Bel Air was a car of balance, symmetry, form, and function put together perfectly into a single machine. So much attention was paid to this sense of symmetry and balance, that the car even included 2 radio antennas at the back of the car, one by each matching tail fin.

It may have been the last of the second generation, a seemingly obscure model year in a 25-year production history, but the 1957 Chevy Bel Air is considered the most iconic among the entire bunch. For that reason, it has become something of a collector’s item, and is commonly found at most classic car musuems. What’s more, it was the first car mass-produced after the Second World War that eventually became a collector’s item. So in many ways it’s also the 'original' collector’s car.

The good news is that in general there are many 57 Chevy models available because there were more than 1.5 million units of the 1957 model made in total. This means that is a surprisingly one of the more affordable classic cars in comparison to the popularity. Where it can get tricky is getting a particular type of Bel Air. The rarest model of all is the Bel Air 2-door Nomad Wagon, of which only 6,264 units were ever produced. The most common model is the Bel Air 4-door sedan, with a total of 264,449 produced in 1957. The Convertible only had 48,068 models made, making it significantly rarer, but at the same time so much more desirable if you live in a warm climate like southern California or Florida. 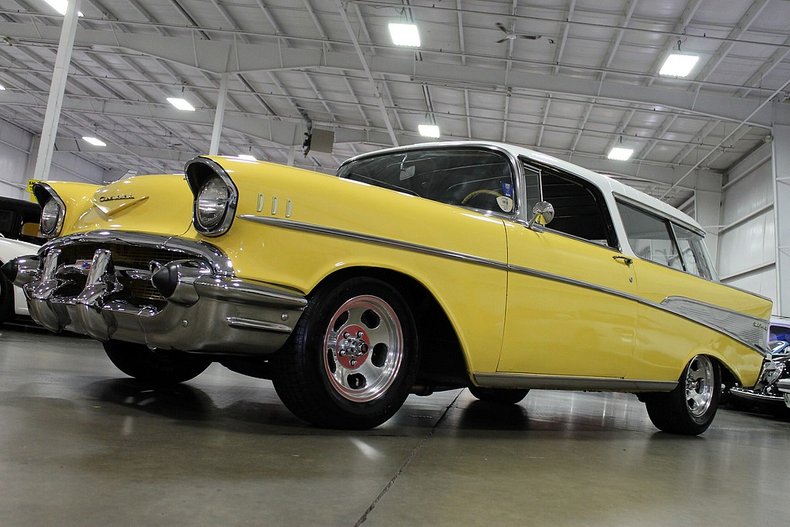 If you were to find one of these classic cars for sale today, you could be looking at a wide price range, depending on the specification and rarity. As we have mentioned, there are indeed plenty of '57 Bel Air models around, but to get your hands on a pristine mint-condition 2-door Bel Air model, which is what most collectors are looking for, and preferably in the most iconic sky blue body color with white and chrome trim, is not an easy feat.