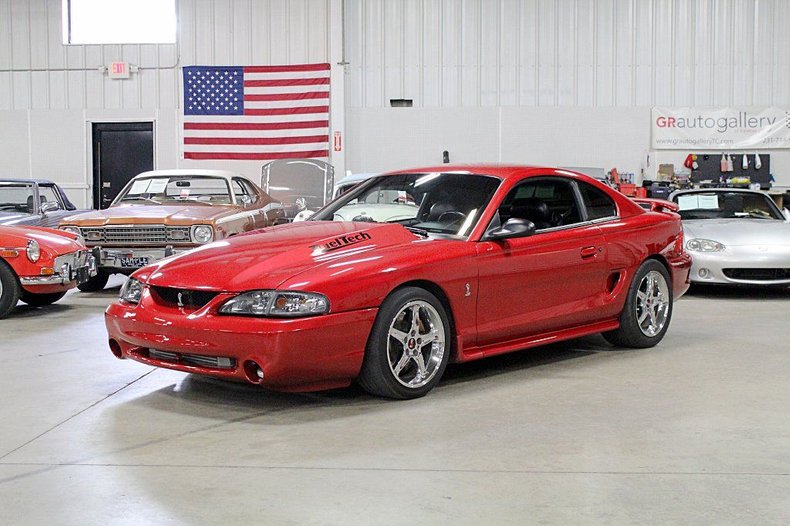 Mustangs through the ages need no introduction as it has been around consistently since well, about 1964 and is currently in its sixth generation of cars. Lets take a couple steps back to 1993 when Ford unveiled their 4th generation of cars that were produced for ten years from 1994-2004. First of all it was a major redesign both cosmetically and mechanically. It veered from its 5.0Liter a year or so after the cosmetic change engine design that had carried the company quite honestly. It featured a brand new all-aluminum 4.6 Liter engine and in the SVT Cobra produced a what was at the time a pretty staggering 305 HP, almost 65 HP more than the previous year with the 5.0Liter. This body style was called SN-95 or the Fox-4 by the Automaker and tried to incorporate styling cues from the earlier years of the Mustang. While the stock SVT Cobra was cool, this is far from stock and is like a Jet plane. There is not enough space provided for the description on this car, so for any interested parties that would like a full break down, I have a pdf. that I can email anytime. The short list includes that is producing around 700 rear-wheel HP on E-85 fuel. There is around 10k miles on a Aluminator M-6009-A46NA shortblock which is rated at 1000HP. It is mated to a TR-3650 , built by ZAK 3650 source that has every upgrade he offers. Has a Magnafuel protuner 750 fuel pump that is rated at 1500 HP and the list seriously goes on and on with the best and most expensive upgrades you can imagine. To duplicate this car would cost 4x the asking price. You can literally drive this car to the race-track in ice cold A/C and smoke the competition once there. From inside this car, It shows almost completely stock with the exception of the on board tuning and aftermarket gauges. The paint is nice and the car runs and drives perfectly. This is a must see.