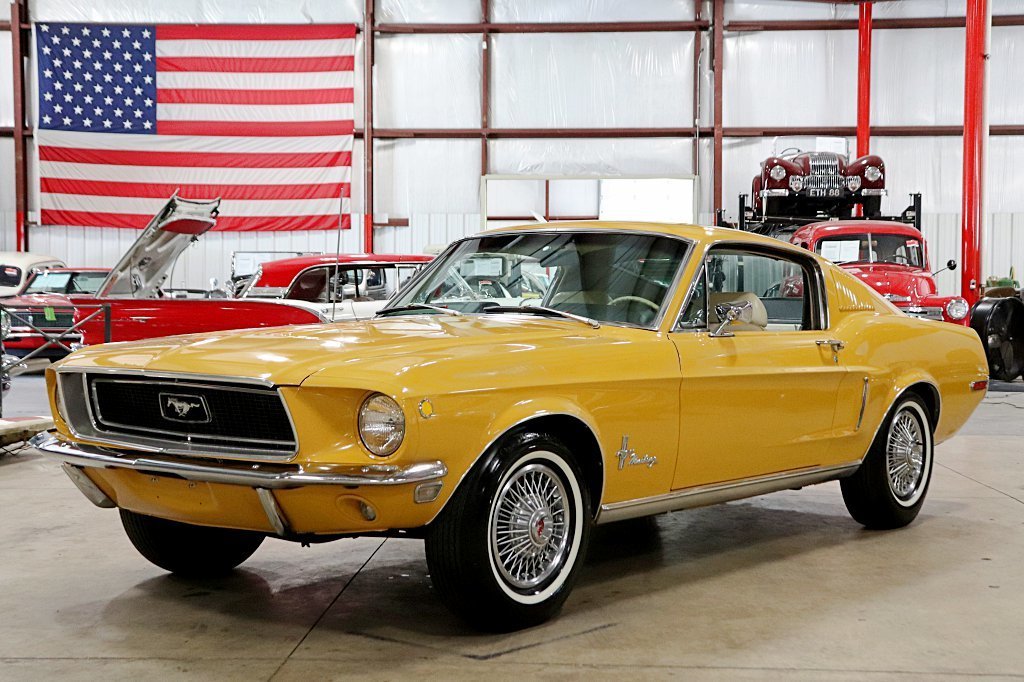 GR Auto Gallery is pleased to present this rare 1968 Ford Mustang Fastback for your consideration. The Mustang example offered here is powered by the optional 289ci V8 that is mated to an automatic transmission. The 289 produced 195 horsepower and was an upgrade over the standard 200ci 6-cylinder.

When a 1968 Mustang has “02” in the 3rd and 4th places on the VIN, it denotes that specific car as being a fastback. The Mustang offered here has the “02” meaning that this is a true fastback Mustang.

After decoding the data plate, one can see that this Mustang has the optional Parchment Vinyl Interior with bucket seats. The interior also features a black dashboard and carpet that add some contrast to the interior. Both the steering wheel and dashboard have wood trim and chrome trim that add class to the already impressive interior.

This specific Mustang was built on the 15, April 1968 and is still in great condition. Mechanically the 1968 Mustang Fastback offered here is in great condition and runs and drives. The transmission shifts smoothly and confidently. Perhaps no other car in American automotive history has captured the hearts of consumers more than the Ford Mustang. Since its introduction, its smaller size and its sporty styling made it an instant success among the American public. 50 years later the love affair with the Ford Mustang lives on and has expanded to all 4 corners of the globe.

When Ford introduced the Ford Mustang in 1964 an instant love affair with the American Pony Car was born. The Mustang was smaller, lighter, and more nimble that any American manufacturer had produced thus far. This coupled with its fresh design, the Ford Mustang became a must-have among the American public. 1967 marked a pivotal year for the Mustang, as this was the first time since the first generation made its debut that vast changes were made to the Mustang. Making it larger and having many more engine options than before. It also eliminated some things that did not make sense. 1968 was just the same and by this point, Ford had found the next best thing and had very little for competition comparatively. Please call or email with any questions or for additional information.