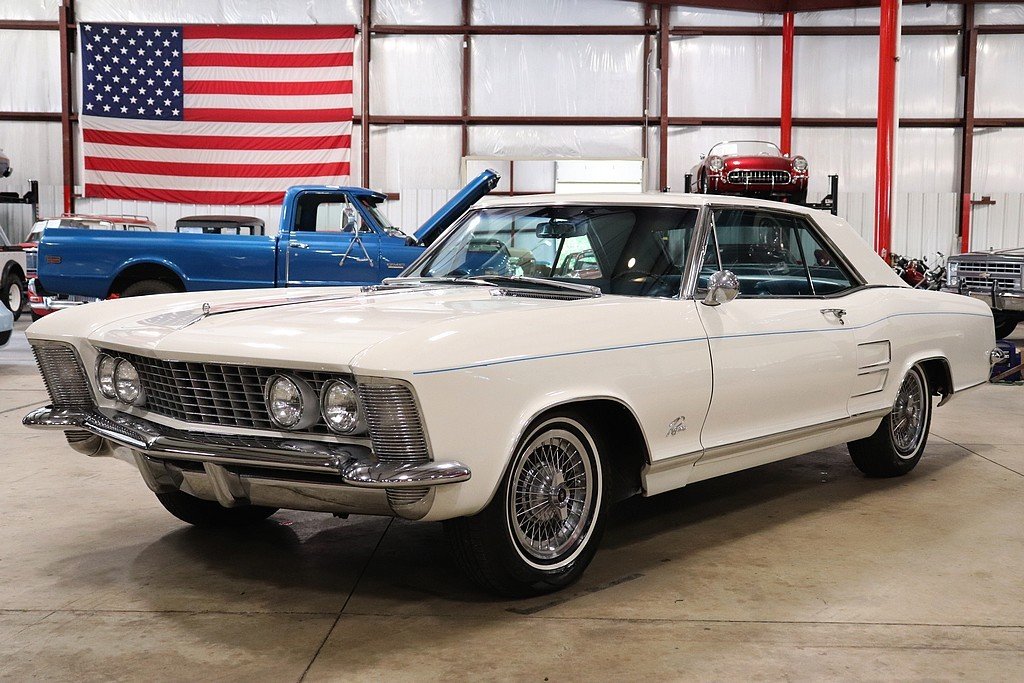 The Buick Riviera has a strong footprint on the history of Buick with its distinctive body style and fighter plane cockpit setup. Produced from 1963-1999 with over 1.1M put into service for the driver that appreciated the American vehicle but wanted something different than a Chevy or Ford. With some small changes in the first generation of the Riviera, the car stayed true to its original concept until later in its production run. Many acclaimed designers of the time heaped praises on the Mitchell design and even Sergio Pininfarina stated that it was one of the most beautiful American cars ever built.
What you see here is a stunning example of the first generation Riviera that was restored less than 8 years ago and is believed to only have 3 owners since it first delivery out of Hosler Pontiac Buick in Clarkston Michigan. Built in the Flint, MI factory in 1964 and delivered to the dealer. The car was bought back by the dealer principal about 10 years ago and kept it in his showroom after he completed the restoration. A few years ago it was sold to a dealer in Fort Wayne IN and then sold to our customer. The car was meticulously restored and brought back to the proper specs and features when it was new. The cars body has clean lines and an impressive paint job that was done in the factory Arctic White with Medium blue leather interior. The proper 425cc engine that is commonly referred to as the 465 Wildcat is sitting correctly in the engine bay with new hood insulation, battery and plugs and wires. This engine produced 340HP with 465lbs of torque! Further recent upgrades include; new front brakes, rear brakes resurfaced, brake booster, master cylinder, new radiator, new shocks, and four new wheel cylinders. The car also rides on the proper 15in wheels with Buick hubcaps and new white wall Hancook tires. Factory features include; leather seats, A/C, AM/FM stereo, cruise control, remote trunk release, power seat, power brakes, power antenna, power steering and power windows.
The car overall is in very impressive and the market is strong on this first generation Riviera as the initial production numbers were kept low to keep the demand high for Buick. Less than 38k were produced and very few remain on the road in this kind of condition. Vehicle comes with both keys, factory owner's manual, jack and spare and new period correct floor mats. Autometer gauges were also installed recently to give the driver a better idea on engine oil pressure and temperature.