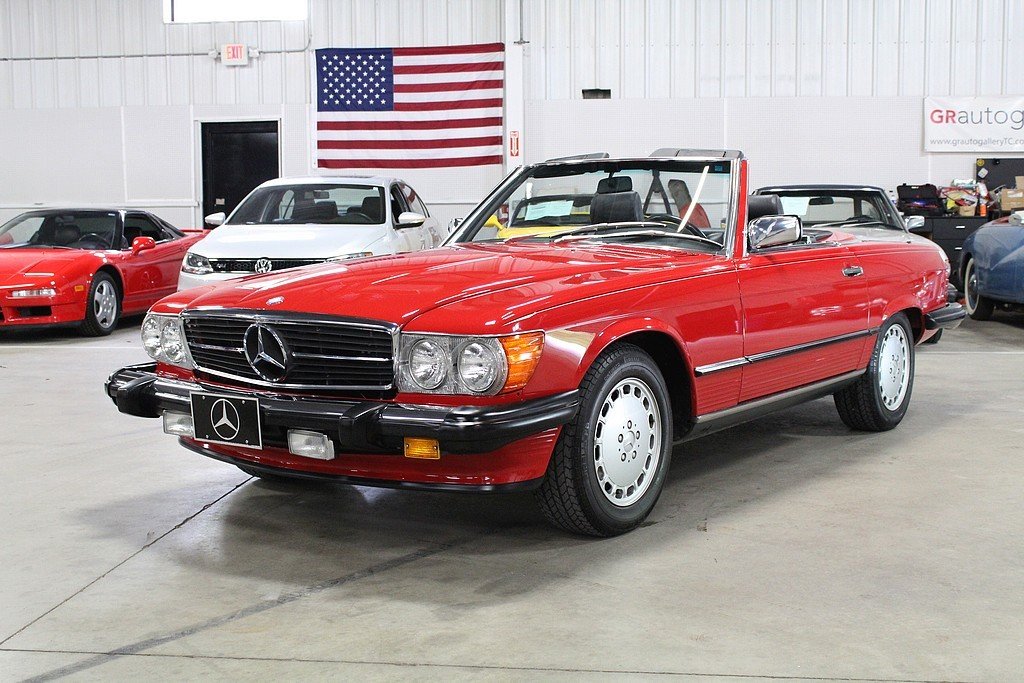 The SL line by Mercedes Benz has been in production since 1954. It was tailored to the affluent who had a taste for performance. This example of still holds true to this day. The 107 Chassis was built for almost a staggering 20 years, from 1972-1989 with a variant of engine options, however the body design was primarily the same with some facelifts along the way. The best examples are those from 1986 through end of build 1989 where drastic changes were made in the way of performance, reliability and safety. They had a more modern braking system with larger disc brakes, a more modern paint system designed to reduce the affect of wear and tear and most importantly the 5.6 liter V8 that had been refined to excellent standards. These cars cost nearly $65,000 new in 1988 and were only for the very rich. Today they remain some of the most collectables of the 107 Chassis design. This car in particular is one of the finest examples our team has ever seen. Not only is this car 100% stock, down to the tires, it has seen less than 10,000 miles since new. It was purchased by a Automotive executive and used only a couple times a summer at his cottage home where it was perfectly stored and cared for. It remained in that original owners hands until 2013, where it then transferred owners. Again, because of the mileage the owners used the car very sparingly and again was also stored very well. GR Auto Gallery has recently taken the car in, given it a detail, fluid flush and a general once over to make sure the car is safe but still retains its originality. Some other things that set this car aside from the rest is that the it has every document from day one including window sticker, sales order, delivery inspection, owners manuals and spare keys that have never been used. In addition, it still retains its build sheet that has never been removed from the drivers side seat rail as well as tool roll that is still inside plastic. The spare has never hit the ground and there is not so much as a stone chip. You will be hard pressed to find another car in this condition with provenance.