"One Owner and Outstanding" 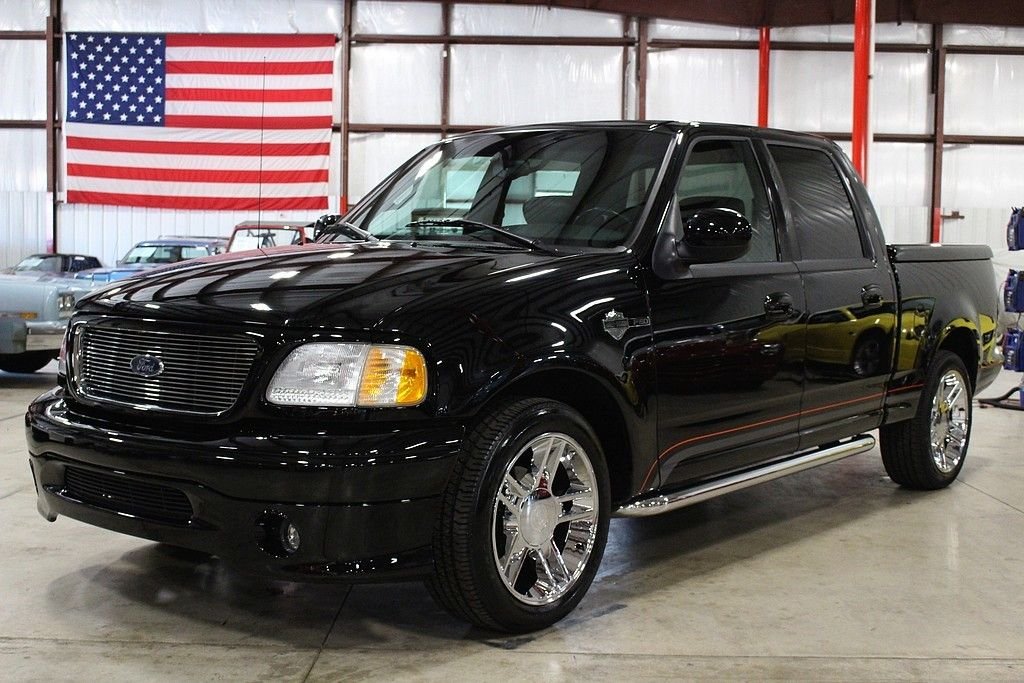 In August of 1999, in Sturgis South Dakota during the famous Harley Davidson Rally, Ford unveiled the first of many Ford-Harley trucks to come – The 2000 Harley Davidson F150. Ford Harley Davidson trucks are bolder and meaner that the other F-series pick ups. They all were fully optioned with details that you can not fined anywhere else and not just appearance packages. For 2001, Ford added the F150 Super Cab to the Harley Davidson line up and dubbed as the “Worlds Only 4-Door Harley”. The signature orange and grey striping and the 20 inch chrome wheels adds huge curb appeal.
GR Auto Gallery is pleased to offer this extremely clean, low mile, one owner 2001 Ford F150 Harley Davidson Edition SuperCrew pick up. This truck was purchased new from Harold Zeigler Ford of Plainwell Michigan fully optioned as a Harley Davidson Edition number 1953. The truck is fully optioned with the Harley package including: Black leather captains chairs with Harley logo, power drivers seat, overhead console with compass and temp control indicators, leather wrapped tilt steering wheel, privacy glass, front and rear floor mats, black exterior paint, special Harley Davidson badges, 20 inch chrome wheels, a carpeted bed liner and matching bed liner was added during the sale etc. This F150 Super Crew HD is powered by its 5.4 liter V8, 4 speed automatic transmission and rear wheel drive. The Harley Davidson package includes 20 inch chrome wheels, Goodyear 275 / 45R20 Goodyear Eagle ST's, 3.73 ratio limited slip rear axle, 6375 GVWR package, over head console, Electronic 4-speed automatic transmission with overdrive, fog lamps, cargo cage with pick up cargo extender, The truck has been under the meticulous care of its original owner, always garaged kept, regularly detailed and all recommended services performed; as a result, this 2001 Harley Edition F150 is in immaculate condition showing as new in all areas considered collector quality. The truck is completely documented including: Original bill of sale, original books, original collector box with letter from Ford containing commemorative plaque and key chain, all service records since new, original Bill of Sale, Ford Super Crew commemorative blanket, original point of purchase brochures, etc.
For 17 model years, the Ford Harley Davidson Edition Pickups have represented Fords top line of pick ups. They remain popular and are collectible. The truck offered here is outstanding in every aspect holding every piece of documentation that any collector would want as well as collector quality condition. Close inspection is encouraged.