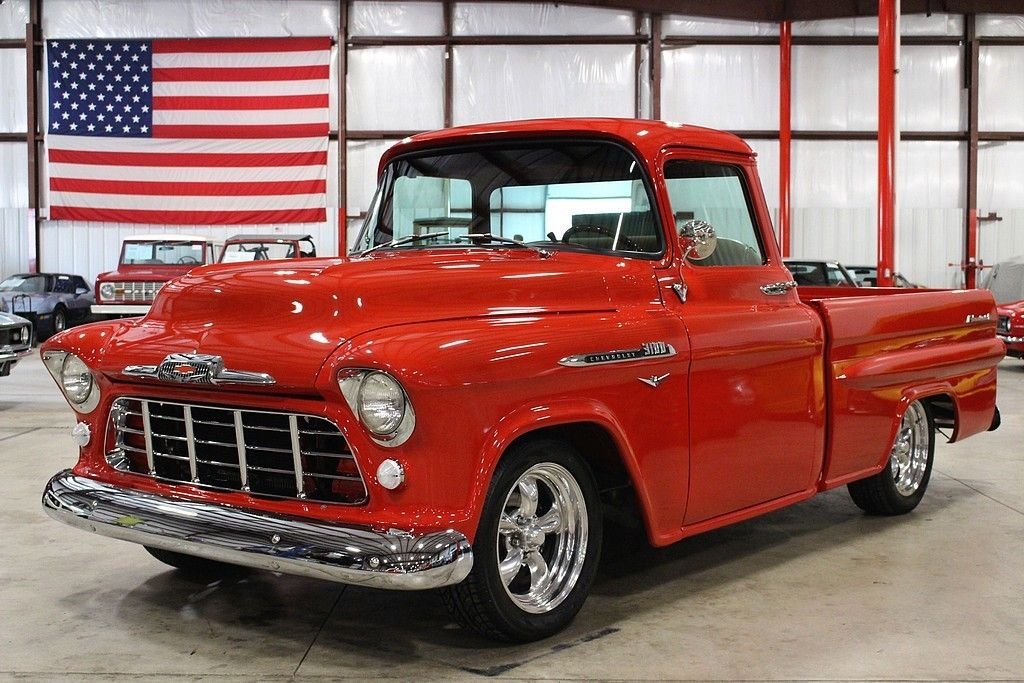 This breathe taking 1956 3100 fleetside pickup has an intense restoration story to tell. It began in 1956 where it came from the factory with a 265 v8 with a 4 speed and it was dark green and was radio delete. It was rescued in a barn in 2012 and made its way to Alabama. The truck was nearly rust free to begin with and the original cab, fenders, rocker panels, interior floor and hood were used. The owner adder the spears from a 1957 hood because he liked the look of them. The entire truck was torn apart and dismantled and then sandblasted and prepared for paint. It was put in primer and block sanded numerous times. After much consideration a power plant was chosen. The truck was fitted with an LS1 5.7L Corvette engine and pulls about 350 HP with a 4L60E computer controlled transmission. Up next for attention was the frame. It was given a TCI suspension and included Mustang 2 rack and pinion, tubular upper and lower control arms, and sway bars with disc brakes.

After the suspension was built and checked to be sure all was square, the chassis was again disassembled and all parts as well as the frame went for powder coating using grey speckled effect. The stock frame was used and it was boxed. The factory straight axle was replaced and given a Nova 8.5 rear axle with 342 gears and new leaf springs replaced the original rear end, making the front and rear tracking the same. The truck was sprayed with many coats of base coat clear coat Guards Red, 1970 Porsche code 027. The truck was given an aluminum radiator and the battery was relocated. The bed was finished with red oak stain over oak wood with 7 coats of Spar Marine Clear and shines at a very high gloss. The strips that separate the oak planks are also wood, doing away with the look of chrome strips. The truck was given a fuel cell under the bed near the rear. The interior was finished in white and tan leather and shows very well. This 3100 was given power windows and given a big back window instead of the small standard glass. Upon re-assembly it was given vintage air and was installed and all new chrome and lights were used. A new sound system was installed with a retro radio as well. There are speakers installed in the kick panels. It was given Omega gauges as well. A bed from 1968 was used, which was the first year a fleetside was offered. The truck has power brakes, power steering and a tilt steering wheel. The wheels are American Racing 17x7 torque thrust with a 5:43/4 bolt pattern.