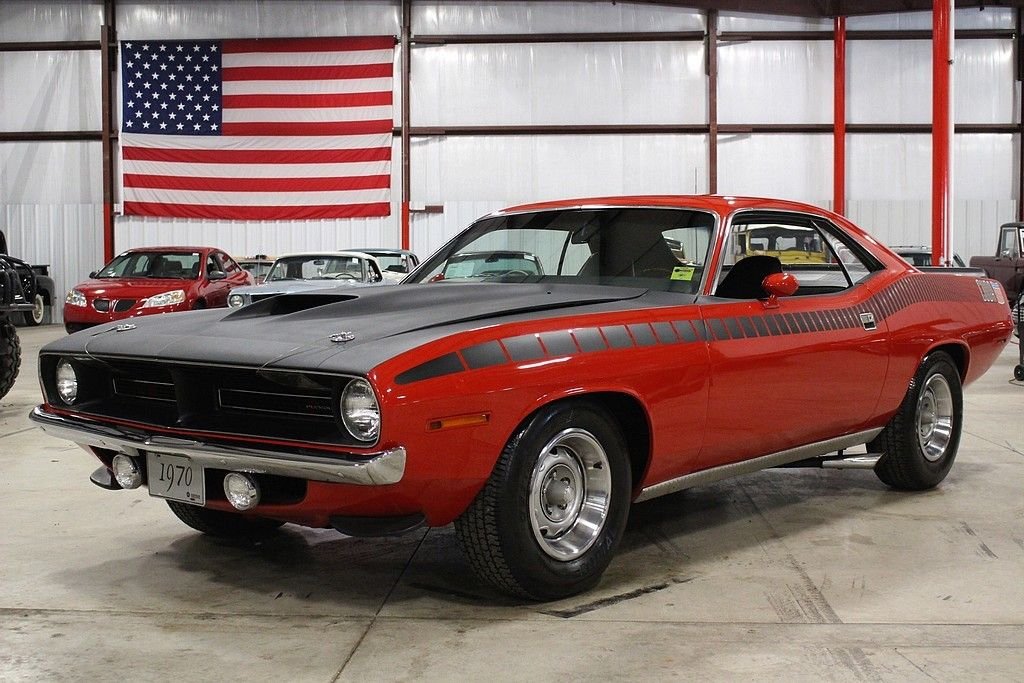 1970 was the first year for the newly redesigned E-Body Plymouth Barracuda and the Dodge Challenger to compete in the popular Trans-Am racing series. Dan Gurney was named the primary driver of the Barracude for the 1970 season. Dan's Racing team was named: “All American Racers” and as a result the Barracuda was named the AAR 'Cuda. Although exact production numbers are a little vague, it is accepted that Plymouth produced just 2,724 AAR's were built for public distribution. All of these units were built in a 5 week period starting on March 10, 1970 and ending on April 17, 1970. All AAR's were equipped with a specially prepared 360 V8 engine outfitted with 3 two barrel (“six pack”) carbs and intake. The AAR had a unique “strobe stripe” graphics which highlighted the AAR badge at the rear of the car. This stripe was suppose to give the illusion of motion even when the car was at a stand still. All AAR's were equipped with a fiberglass hood with functional hood scoop to allow fresh air to be fed into the Six Pack carbs,. All AAR's were equipped with front and rear plastic spoilers as well as side exit exhaust. The AAR was also one of the first muscle cars to use an off set tire size to give the car a raked stance. Standard rear axle ratios were 3:55 with an optional 3:91 available. Power disc front brakes with 11 inch drum rears were standard.

GR Auto Gallery is pleased to offer this highly sought after 1970 Plymouth AAR 'Cuda for global consideration. According to the owner, this highly original example features its original factory sheet metal body panels, original fiberglass hood and has been the recipient of one repaint completed 13 years ago. According to the original fender tag the car is presented and was equipped as follows: 340 290hp 3x2 barrel 8 cylinder engine, heavy duty automatic transmission, bright red exterior color, high vinyl bucket black bucket seats, full door panels, Trans Am package, power brakes, console with wood grain panel, left hand remote racing mirror, hood tie down pins, rear “duck wing” spoiler, deck lid molding treatment, roof drip rail, 70 only side exhaust, fiberglass fresh air hood, solid state AM radio, longitudinal stripes in Trans Am Black, 26 inch radiator and built to US Specs. Today, this AAR remains nearly exact to its original spec: the car is powered by a 340 V8 block specially prepared to original spec. The 13 year old repaint still shows excellent all areas. The underside remains original including sub-frame and floors are highly original and remain excellent as well as the interior retains its original dash, console, seats and panels. The odometer reads 74344 miles and these miles are said and believed to be original. Mechanically, the performance of this car is amazing; the power, feel, and sound brings you back to a time when performance was king and federal emissions have not yet hijacked the Muscle Car Phenomena.
The AAR is special, it represents a rare breed of muscle cars that were not built for the drag strip, rather a muscle car that was produced to hold up to the handling and braking demands of the hard core American Trans Am road racing circuit. Low production coupled with excellent drivability creates a high demand for the AAR as these cars are highly sought after in international circles. At the price offered here, our highly original example offered here is sure to catch the attention to buyers world wide as it is an excellent automotive investment. The car is documented by its original fender tag and all VIN numbers are in place. Included with the sale is a original, date coded 340 TA engine block that is fully buildable.