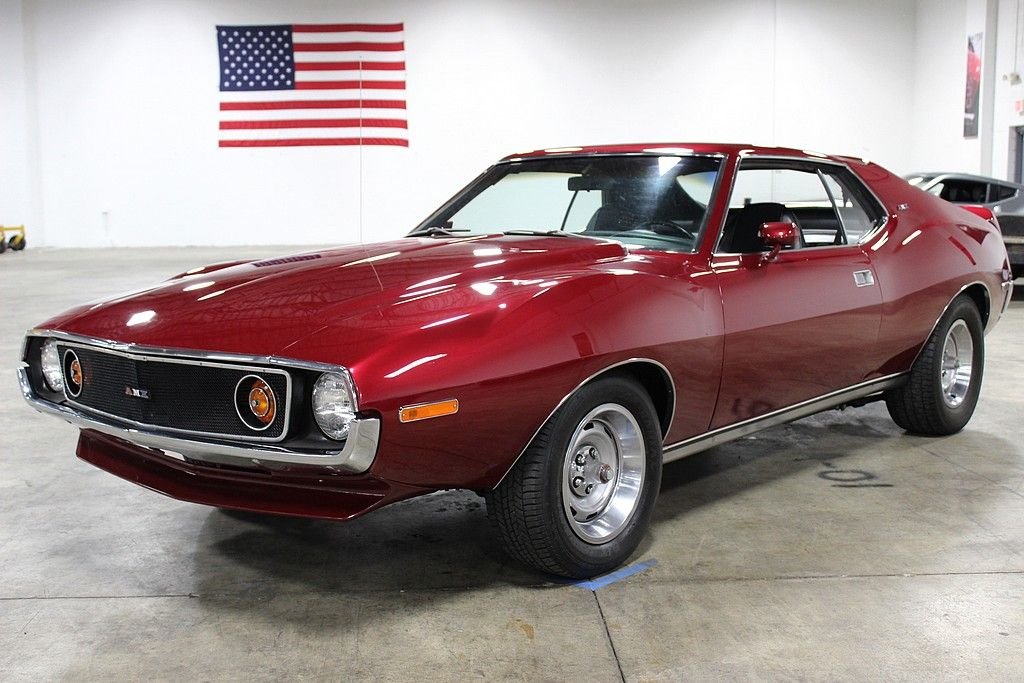 The AMC Javelin is a pony car that was built by AMC between 1967 and 1974 in two generations, model years 1968 to 1970 (with a separate design in 1970) and 1971 to 1974. The sporty Javelins came only as two-door hardtop (with no "B" pillar) body style, and were available in economical versions or as high-performance muscle cars. Javelins won the Trans-Am race series with AMC sponsorship in 1971 and 1972, and independently in 1976. The second-generation AMX version was the first pony car to be used as a normal highway patrol police car by any U.S. organization. In addition to manufacture in Kenosha, Wisconsin, Javelins were assembled under license in Germany, Mexico, Venezuela, and Australia. They were also sold in other international markets.

Sales of convertibles were dropping and AMC did not have the resources to design separate fastback and notchback hardtops that were available on the Mustang and on the second-generation Plymouth Barracuda, so the AMC designer team under Richard A. Teague penned only one body style, "a smooth semi-fastback roofline that helped set Javelin apart from other pony cars.” The Javelin was built on AMC's Rambler American platform only as a two-door hardtop model to be a hip, dashing, affordable pony car, as well as available in muscle car performance versions. Despite management's insistence on things like good trunk space and rear- seat room, Teague managed to endow the Javelin with what he termed the wet T-shirt look: “voluptuous curves with nary a hint of fat."

There were 27,696 Javelins manufactured in 1974 with only 4,980 of those as Javelin AMX models (17% of production) and even less were equipped with the very rare “GO” performance package. This bad !@# and rare '74 sports gorgeous ruby red paint over its original black interior. It was originally equipped with a 304ci V8 and a 3-speed manual. It is now equipped with a thundering 407ci stroker making 500hp matted to a 4-Speed manual with a Hurst shifter. This AMX was restored between 1994-1996 to its current condition and it appears and rides as if the work was done yesterday. It has been meticulously maintained and detailed to perfection. It is one of the rare gems that is equipped with the “GO” performance package which included front disk brakes, a 140mph speedometer, and 15”x7” Rally wheels among other items. Hagerty Insurance magazine picked the '71-'74 Javelin AMX as 1 of their 5 picks on their muscle cars to buy right now list in May of 2010. Don't miss your opportunity to own a truly rare and unique automobile that performs better than new and sports rare and desirable options as prices are starting to rise!

To view over 80 photos of this vehicle visit our website www.grautogallery.com