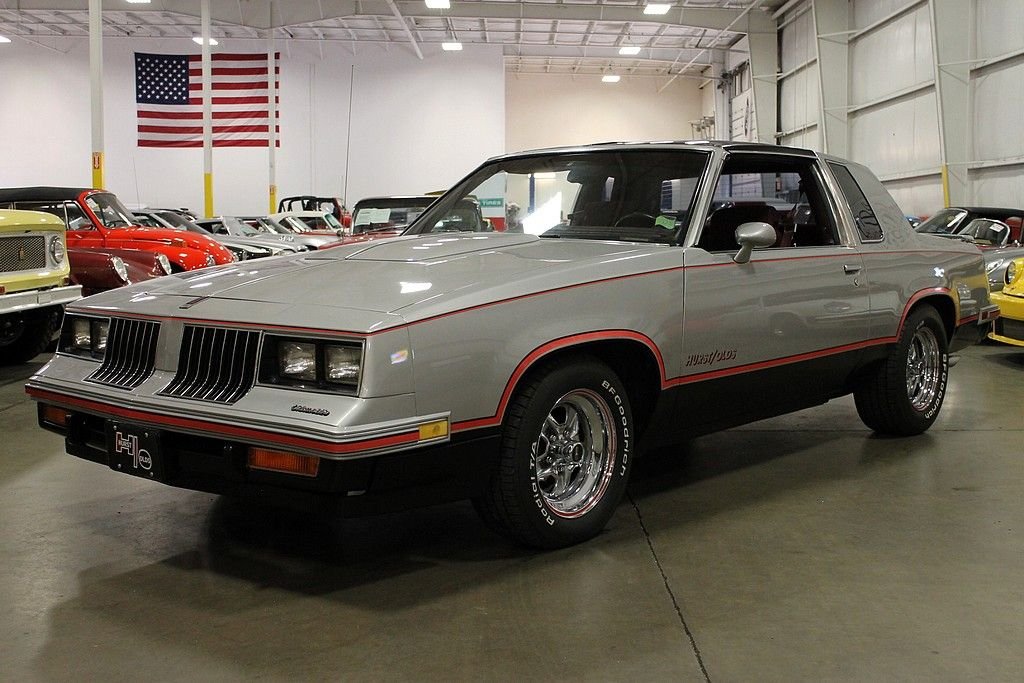 GR Auto Gallery is pleased to present this 1984 Oldsmobile Cutlass Hurst Coupe for purchase. Hurst was a OEM supplier for automakers and provided components for numerous muscle car models by AMC, Ford, Chrysler, and GM. Several models were produced in cooperation with Hurst that incorporated the Hurst name, but none were more popular than the models from Oldsmobile such as the 442 and the Cutlass Supreme commonly referred to as just the Hurst Olds. In 1983, GM again offered a limited-edition Hurst/Olds - it was the 15th anniversary of the first Hurst/Olds introduced in 1968. The Hurst Lightning Rod floor shifter was introduced in the '83 H/O. For its 15th Anniversary Edition, the '83 H/O came only in black with silver rocker panels. Chrome 15" wheels fitted Goodyear GT tires, and a power bulge hood and rear spoiler gave the car a purposeful look. Demand for the car was off the charts! Only 2,500 was originally planned but they ended up bumping production up to 3,100, and then bringing the model back for 1984 with a stronger 8.5” rear end. Enthusiasts tend to seek out these cars as they are essentially the last chapter in Oldsmobile's rear-wheel drive muscle car history.
This '84 Hurst Olds comes out of Virginia originally and is in amazing condition. It has received one re-paint and several upgrades to have this car retain great curb appeal and awesome performance. It is powered by an Oldsmobile 403ci V8 engine paired with an automatic transmission (lightning rod shifter). It features power seats, keyless entry with trunk pop, Edelbrock performer manifold & carburetor (originally carburetor comes with purchase), new suspension, new tires, new starter, new radiator, new muffler, and aftermarket Kenwood CD player & stereo system. This car is in amazing condition inside, outside, and underneath. It's rare to find these cars and far more uncommon to see one in this condition! Please call or email for more details!