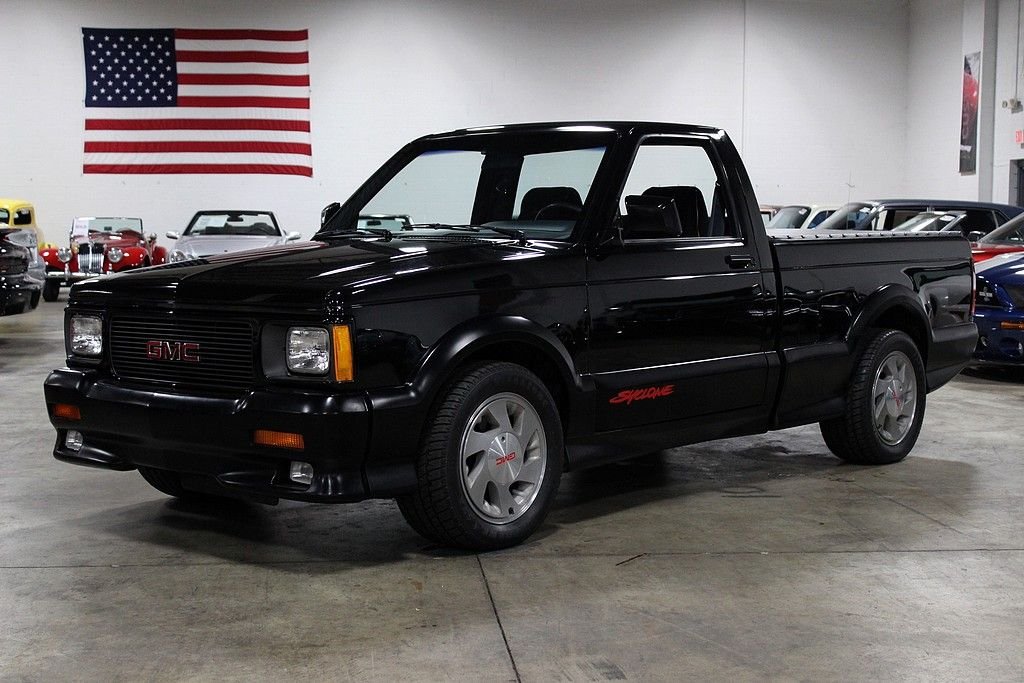 Take a very light duty pick-up, stuff a turbocharged V6 into it, add AWD, and you've got a badass little buggy named the Syclone. The Syclone was part of a radical performance movement by GM in the early 90's starting with the Corvette ZR-1 and the C/K 1500 454SS in 1990 then onto the Syclone in 1991. These trucks featured a 4.3L V6 engine with a Mitsubishi turbocharger and a Garrett intercooler which produced 280hp and 350lb.ft. of torque. Car and Driver infamously put it in a comparison test with a Ferrari 348 in which it beat it in performance tests with a 4.3 second sprint to 60mph and a 13.6 second ¼ mile…these trucks were serious contenders in the early 90s performance world.

There were 2,995 Syclones produced in 1991 with 113 of those built for export sales. 31 of those 113 were built exclusively for the Saudi Arabian market with metric dash clusters, leaded fuel chips, and a resonator in-place of a catalytic converter. Turns out the market was soft for them and all 31 were return to GM in 1994. GM used 1 as a parts truck and eventually sold the remaining 30, which have become known as “Saudi Syclones”.

This particular example is #2,759 of 2,995 and is also 1 of the 31 ultra-rare Saudi Syclones! It is a 2-owner truck with the first owner being a GM executive who won an internal company lottery for the opportunity to purchase it, in which he did. The current owner purchased it in 1997 with 1,500 miles and today it has just 2,196 miles! It has mostly been relegated to car show duty and has multiple 1st and 2nd place trophies as pictured and go with the sale. Also included with the sale is more documentation than one knows what to do with. The essentials such as both sets of original keys, center cap tool, books, manuals, and window sticker are included. From there, also included are: sales brochures and literature, many pages of internal GM meetings notes from the truck division, internal written GM marketing plans, a framed show board all about the truck, a number of magazines that featured the Syclone, an as new Syclone jacket and polo shirt from the Shreveport, LA assembly plant, extra decals, and 2 instructional videos on the maintenance and operations of the truck.

You'd have a better chance of hitting the lottery than finding another Syclone with this low of mileage, with this much documentation, and with this much history. These are solid investment pieces that are sure to appreciate even further.