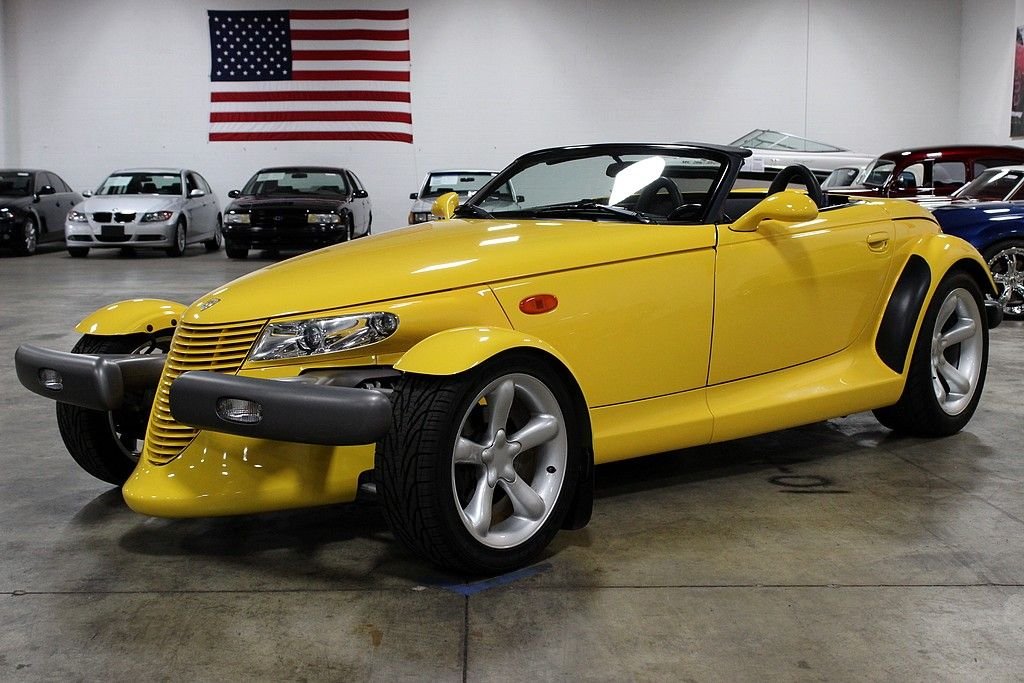 GR Auto Gallery is pleased to present this gorgeous 1999 Plymouth Prowler! The design of the Prowler was said to have been inspired after Chrysler engineers were given free rein to create whatever they wanted in a "hot rod" or "sportster" type vehicle. One of the most striking design features of the Prowler are the open, Indy racer style front wheels.

New for the '99 model year, this Prowler features the more powerful aluminum block 253hp version 3.5L V6 mated to a 4-speed autostick automatic transmission. The transmission was located at the rear of the vehicle and joined to the engine by a flexible driveshaft that rotated at engine speed, an arrangement similar to that used by the C5 Corvette, Porsche 944, and Alfa Romeo 75 which helped to facilitate a desirable 50-50 front-rear weight distribution. While criticized for featuring a V6 only, Chrysler's High Output 3.5L had a horsepower rating similar to the company's Magnum V8s of that era. While not making nearly as much torque as a V8, Prowler's light weight translated into impressive off-the-line acceleration with 0-60mph coming in 5.8 seconds with a top speed of 126mph electronically limited.

The car prominently featured aluminum in its construction, chiefly in the chassis. In many cases, the components were adhesively bonded. The body was produced in Shadyside, Ohio, and the car was assembled by hand at the Conner Avenue Assembly Plant in Detroit, Michigan. This Prowler is finished in “Prowler Yellow” over black leather and is in excellent condition with only 15,992 miles on the clock. It is a 2 owner car and was purchased by the current owner 16 years ago with only 29 miles. Everything operates as new and has recently received an oil change and new front tires. Speaking of tires, they are 225/45R17 in the front and 295/40R20 in the back so it has that cool hot rod look. It also features composite 13" vented disc brakes in front and 11" vented discs in the rear.

Chrysler only made 11,702 Prowlers from 1997-2002 with 8,532 of them badged as a “Plymouth Prowler” and 3,170 badged as a “Chrysler Prowler”. There were 3,921 Plymouth Prowlers manufactured in 1999 with this being number 950 produced. Don't miss your opportunity to own this extremely unique and cool roadster! A safe investment as they have not depreciated much and have a great upside. Combine these facts with the recent 4% uptick in selling prices of Prowler's globally, there's simply not a better time to buy than now.