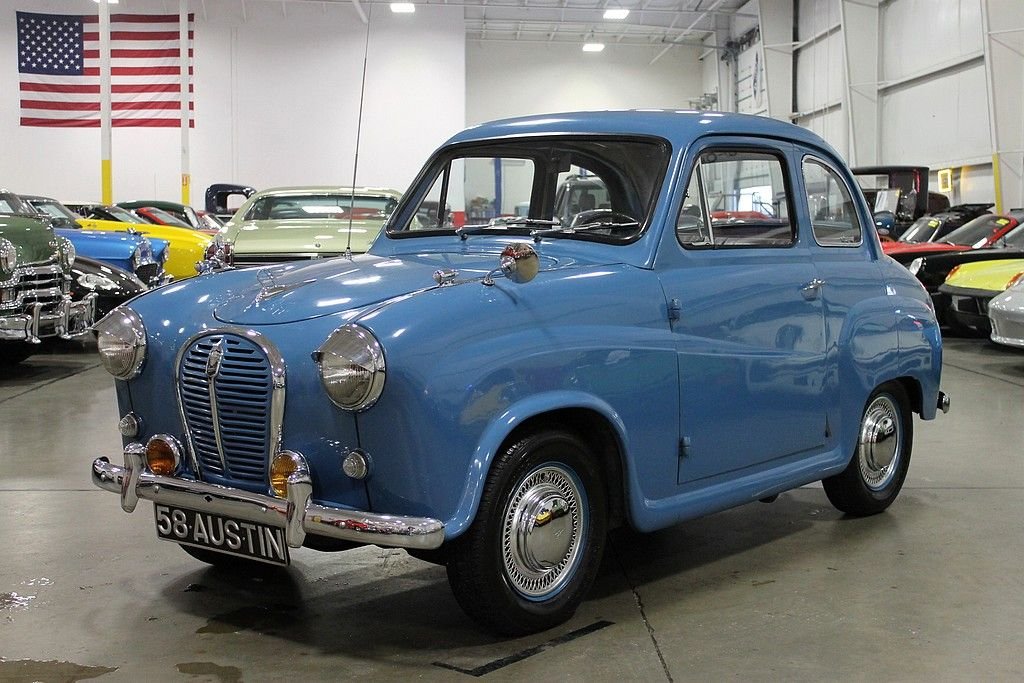 As the ultimate development of Austin's smallest model, the A30 “Seven” otherwise known as the “Baby,” the A35 Deluxe 2-door Sedan was produced from 1957 through 1959 and heralded many improvements over its predecessor. Among them was BMC's larger 34-hp, 948 cc A-Series OHV four-cylinder engine, which also powered the Morris Minor 1000. Since fuel quality had improved, the A35's compression ratio was increased to 8.3:1, helping to provide greater performance than the outgoing A30.

Stylistic updates included an enlarged radiator grille with painted slats replacing the prior chrome finish and a larger rear window. Safety was enhanced with electric flashing turn-signal indicators replacing the old semaphores. Drivability took a great leap forward as the gearbox was revised with better-spaced ratios, which were particularly noticeable between third and fourth gear, allowing 60 mph in third and far better acceleration and hill-climbing abilities.

Despite its diminutive size and modest specifications, the economical A35 was a remarkably successful “giant killer” in British saloon-car competition in period, chalking up an impressive victory tally in the hands of many future driving legends. Today, the A35 continues its winning ways on today's vintage racing circuit, particularly with such noted experts behind the wheel as Martin Brundle, the BBC's F1 color commentator, former F1 driver and 1988 World Sport scar Champion.

This particular car is in fabulous shape for the years and the fit and finish is quite impressive. Vehicle appears to have been repainted at some point and interior retains it originality with some updates. Were told by previous owner that engine was completely rebuilt and transmission gone thru and serviced. Vehicle's gauges function properly and electronics work flawlessly. Extra gauges of water temperature and oil pressure provide extra feedback for the driver. Both rear pop-out windows work nicely and fit well with body. Car runs and drives with ease and is quite impressive with its drivability and overall looks. New set of 13in tires are mounted nicely on this cute little buggy and a car that will not get overlooked at any car show or auto event. Sometimes, bigger isn't always better!

It retains the original spare wheel and tire, chrome accessories, heat output source, factory workshop manual, and an original British Motor Industry Heritage Trust Certificate detailing specifics of this car when it was new. Recently sold example at auction brought over $33,000; this is a bargain for the collector or investor.