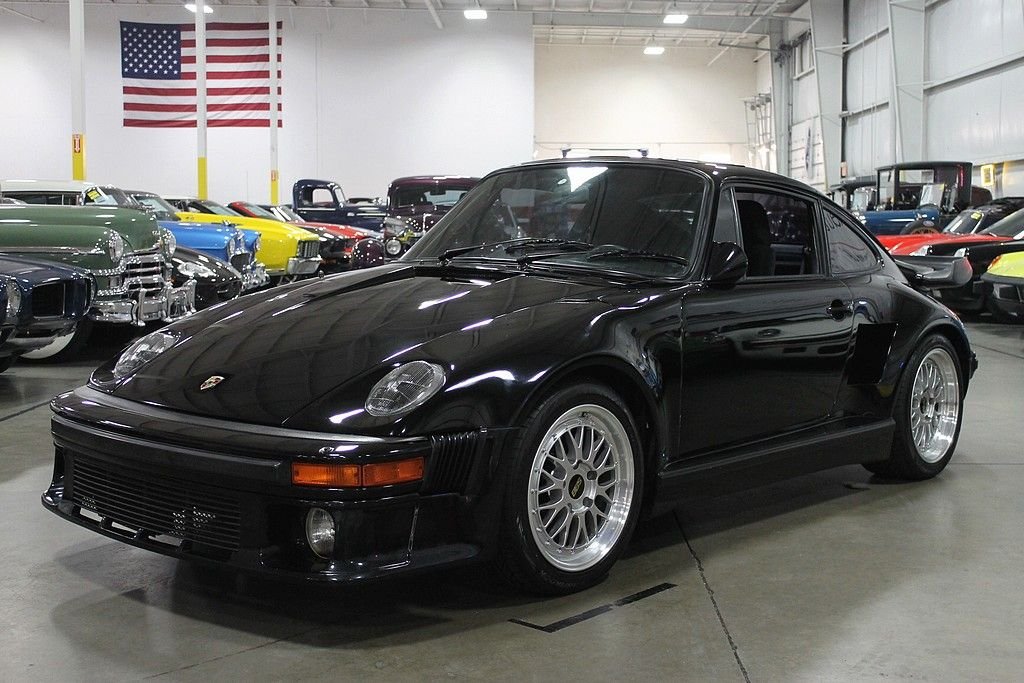 1975 marked the year that Porsche took its turbo charged program from the race track and integrated into its street production cars offered to the public. The car was introduced as the 930 and its noticeably more bodacious body lines combined with the extra kick of the turbo charged system, the 930 forced its self on the world stage as an instant exotic and later, with some improvements and the “Flachbau” or slant-nose, would be held in the highest realm of the supercars of the 80's. The “Flachbau” caught its cues from the legendary 935 race cars that dominated the endurance racing world and also brought Porsche to victory in the FIA World Championship for Makes each year from 1976 to 1979. The “Flachbau” could only be ordered through Porsche's Special Wish program and with the nose of each car hand crafted the cars commanded a hefty premium and factory examples were and are very sparse. Demand was such that the slant or 935 look spawned companies such as DP and American International Racing to take their conversions originally designed for the racing circuit and offer them as conversions to Porsche's 911 and 930 production car lines.

We are pleased to offer this well documented fully serviced 1981 Porsche 930 Turbo American International Racing (A.I.R.) conversion. American International Racing was and still is one of the leading aftermarket body panel manufacturer for Porsche conversions and Porsche Race cars. History indicates that the A.I.R conversion was done performed in the early 80's with much attention to detail. The front spoiler, the cooling cut outs, the front fenders, the rear spoiler and the side sport mirrors are all derived from the 934 and 935 racing legends. The car also features Recaro Racing Seats, newer BBS Wheels and new tires (255/40/17 rear, 205/40/17's). Vehicle was purchased in June of 1987 and held in a private collection for the next 26 years with very little use. In the fall of 2011, the car went through a major engine out service addressing everything needed for a car that had been sitting for 20 plus years. Complete service on the fuel system including the tank, new oil return tubes, complete engine out reseal, new chain tensioners, new pop off valve, rebuilt turbo, and general freshening. (See Service Receipt in photo's.) The car has since been driven 725 miles and this 31218 mile example remains mechanically fit, possess plenty of power, smooth shifting and true braking. Cosmetically, the car remains excellent as it was stored in a climate controlled environment since its purchase in 1987. Air cooled 911's have taken the globe by storm in recent years and continue to be highly sought after, A three owner, low mile, period modified example such as this will continue to be a proven investment. Call or email for details.

Gr Auto Gallery, LLC and our sister company, Wheelz Sales and Leasing Inc. makes every effort to represent each vehicle accurately and with integrity. We also welcome third party inspections when necessary. Although we try to do our very best to be accurate in our description writing we are human and do make mistakes. Unless otherwise noted, All vehicles are sold AS IS, No Warranty Expressed or Implied. All sales final. GR Auto Gallery and all its affiliates reserve the right to charge a 3% processing fee on any credit card sales of over $2,500.