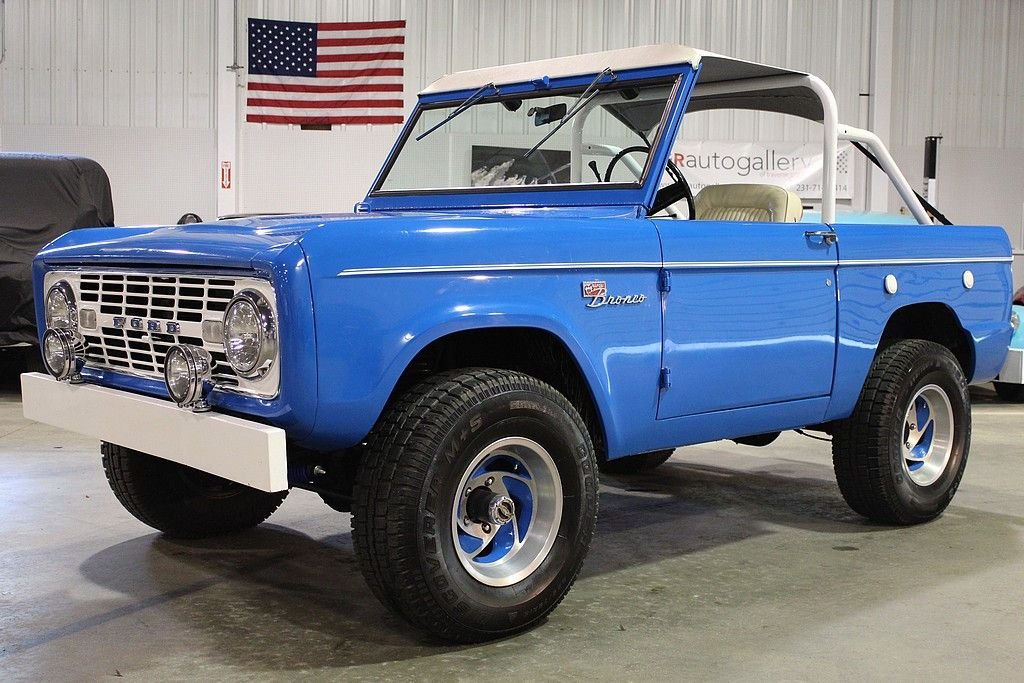 The original Bronco was an Off-Road Vehicle, intended to compete primarily with the Jeep CJ Models and the International Scout. The Bronco began production with the 1966 model using a small riding 92-inch wheelbase. The Bronco was Fords first compact SUV and proved to be an instant success. Although very popular with the off-roaders these little work-horses found homes in a variety of different ways. They were used on Farms and ranches and were also very popular for the use of delivery vehicles in and around large cities. Some even made it to serve in the United States Military (this may have been one of those).

The current owner states that this vehicle came out of a military auction in up-state New York, so after some further research with no other documentation to go on I figured out that Ford did receive Military contract that produced around 120 military Broncos from 1966-1968 and some of these remained in service until the mid-80's. They were used in all four branches of the military and the early ones used a U15 VIN designation, which this one has. They were stamped with a plate giving details on which branch it was designated to but this one is long gone. The only other sign that it might be is the remains of the Ford Fleet Green color under the dash and under the re-paint which is the color in which they were shipped out to the Military.

This vehicle is not a show queen, It was built to be enjoyed and driven. In the last 4,000 miles the Bronco has received a full engine re-build with a very mild cam. Also upgraded is a Mallory ignition, headers and Edelbrock carburetor. At the same time the transmission was replaced with an automatic. (The owner still has the column with shifter, 3-speed trans and transfer case.). The clutch is still in place but is not connected. At this time rear axle shafts, rear drive shaft, front springs and steering stabilizer were fitted. While going through the driveline components he decided to add new master cylinder, pads and drums for the brakes and new wheel cylinders.

The body has been altered in two areas, the first was that the rear fenders were cut and the second is that the window channels were filled. The owner states that he still has the side windows with window frames that can be fitted back to original.

Also coming with the Bronco is the original hard-top and although it is un-restored it is not rusty with the only holes are from the numerous antennae that have been fitted over the years.

If you are looking for a rust-free mechanically sound early Bronco please consider this one as these are becoming harder and harder to find in this price range.

Gr Auto Gallery, LLC and our sister company, Wheelz Sales and Leasing Inc. makes every effort to represent each vehicle accurately and with integrity. We also welcome third party inspections when necessary. Although we try to do our very best to be accurate in our description writing we are human and do make mistakes. Unless otherwise noted, All vehicles are sold AS IS, No Warranty Expressed or Implied. All sales final. GR Auto Gallery and all its affiliates reserve the right to charge a 3% processing fee on any credit card sales of over $2,500.