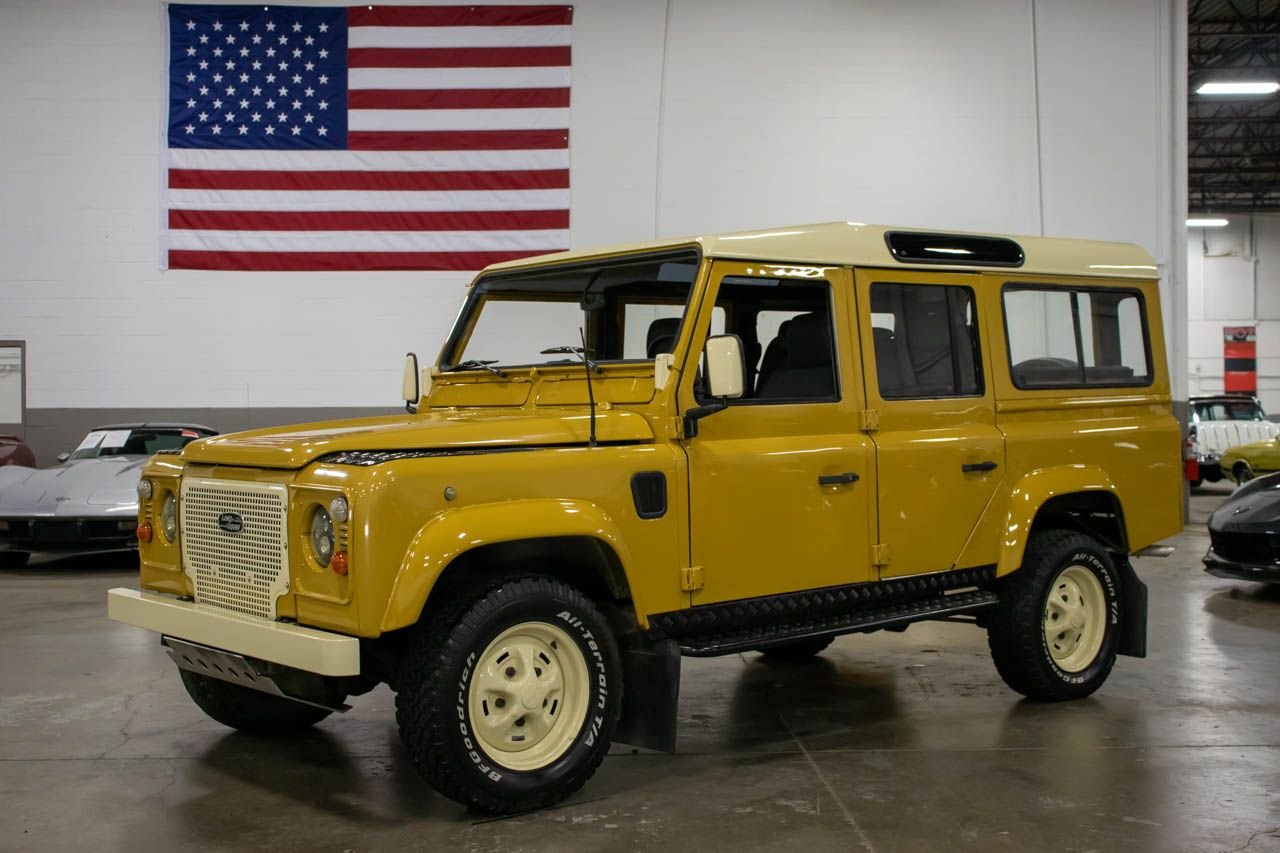 The GR Auto Galery is pleased to present this rare left-hand drive 1991 Land Rover Defender 110 for your consideration. This 110 comes in a mustard yellow paint job with cream accents complemented by a black interior. Powering This Land Rover is a 2.5 Liter turbo diesel paired to a 5-speed manual transmission. This Land Rover was imported from Serbia in 2020. The 110 was launched in 1983, and the 90 followed in 1984. From 1984, wind-up windows were fitted (Series models and very early 110s had sliding panels), and a 2.5-litre (153 cu in), 68 horsepower (51 kW) diesel engine was introduced. This was based on the earlier 2.3-litre (140 cu in) engine, but had a more modern fuel-injection system as well as increased capacity. A low compression version of the 3.5-litre (214 cu in) V8 Range Rover engine improved performance. It was initially available in the 110 with a Range Rover LT95 four-speed transmission with integral transfer case and vacuum operated differential lock, then later in conjunction with a high strength "Santana" five-speed transmission. Please call or email us today for more information.

The Land Rover Defender (initially introduced as the Land Rover 110 / One Ten, and in 1984 joined by the Land Rover 90 / Ninety, plus the new, extra-length Land Rover 127 in 1985) is a series of British off-road cars and pick-up trucks. They consistently have four-wheel drive, and were developed in the 1980s from the original Land Rover series which was launched at the Amsterdam Motor Show in April 1948. Following the 1989 introduction of the Land Rover Discovery, the term 'Land Rover' became the name of a broader marque, and thus no longer worked as the name of a specific model; thus in 1990 Land Rover renamed the 90 and 110 as Defender 90 and Defender 110 respectively. The 127 became the Defender 130.
The vehicle, a British equivalent of the Second World War derived (Willys) Jeep, gained a worldwide reputation for ruggedness and versatility. Using a steel ladder chassis and an aluminium alloy bodywork, the Land Rover originally used detuned versions of Rover engines. The original Defender is still being produced in developing countries despite the arrival of the Land Rover Defender (L663).

To see over 80 photos of this car, including undercarriage please visit our website www.grautogallery.com