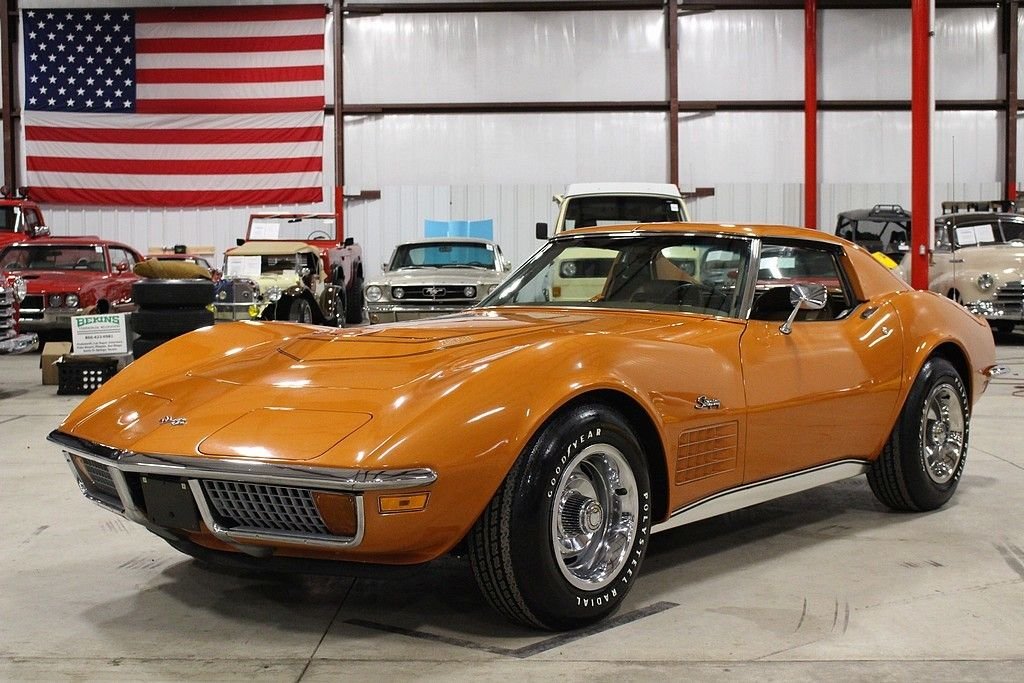 Like all manufacturers during the late '60s and early '70s, Chevrolet faced increasing pressure from the insurance industry, government regulators, and safety advocates. Suddenly, bigger (in terms of motor) was not better. When the big block, 454-cubic inch V-8 became available, the 1970 model year also offered a new solid-lifter, 350-cubic inch small block LT-1 option for Corvette. With 370 horsepower, the LT-1 had numbers more commonly associated with big block motors but without the additional nose-heavy weight of the larger powerplant.

Like the big block cars, compression ratios were reduced in 1971 to allow for the use of unleaded fuels, and horsepower was reduced to 330. Car & Driver quoted 0–60 mph in 6.0 seconds, completion of the quarter-mile in 14.57 seconds, and a top speed of 137 mph from the four-speed-equipped Corvette they tested. The LT-1 engine option made its final appearance in 1972. Horsepower was now quoted at 255 in SAE net terms, and engines were detuned to meet new Federal emission control standards, yet performance remained excellent. Sales totaled 27,004, with 20,496 coupes and only 6,508 convertibles. Chevrolet proudly proclaimed the Corvette “America's only true production sports car.”

Just out of a private collection, GR Auto gallery is pleased to offer this rare and stunning, 1972 Chevrolet Corvette LT-1 Coupe 4-speed coupe. Records document that this LT1 coupe was delivered new at Felix Chevrolet of Los Angeles, California dressed in Ontario Orange Metallic exterior paint over Saddle leather interior. According to the original build sheet or tank sticker, the car came highly optioned with: 4-Season Air Conditioning, Power Windows, LT1 Special 350 V8, Tilt Telescopic Steering Wheel, Power Steering, F70 X 15 White Lettered Tires, Power Brakes, AM / FM Push Button Radio, 97 97 Ontario Orange Exterior Paint and Saddle Leather Custom Interior. Since its original purchase, records and receipts indicate that the car remained in southern California and has had 4 responsible owners until acquired by one of our local clients in 2014. The car remained completely original until approximately 2006 where a targeted, selective style restoration using only NOS or original parts was performed on a rust free, no hit car. No expense was spared and a huge amount of detail was applied during this process to while preserving the overall integrity and originality of the car. As a result, the overall presentation of this LT1 is excellent. The performance of this LT1 is amazing. It pulls strong in every gear, shifts smoothly, demonstrates a tight suspension, and brakes straight.
We all know that 1972 was the last year for the front and rear chrome bumper for the C3 Vettes making them more desirable than the later years, and the LT1 option is the top of the food chain for that year. The car offered here is rare, as only 6.4 percent, 1741 units, of total Corvette production were the LT1 package. This car, given its color and options is believed to be 1 of only 286.
Documentation includes the original build sheet, the original owners manual, a news paper article from 1991 where the car was entered in a show, an appraisal from 2004 noting the car still in all original condition, many of the original parts that were replaced including the original wheels with correct NOS raised letter bias ply tires, many receipts documenting the restoration work and service history, owner transactions, sales literature and other paraphernalia.