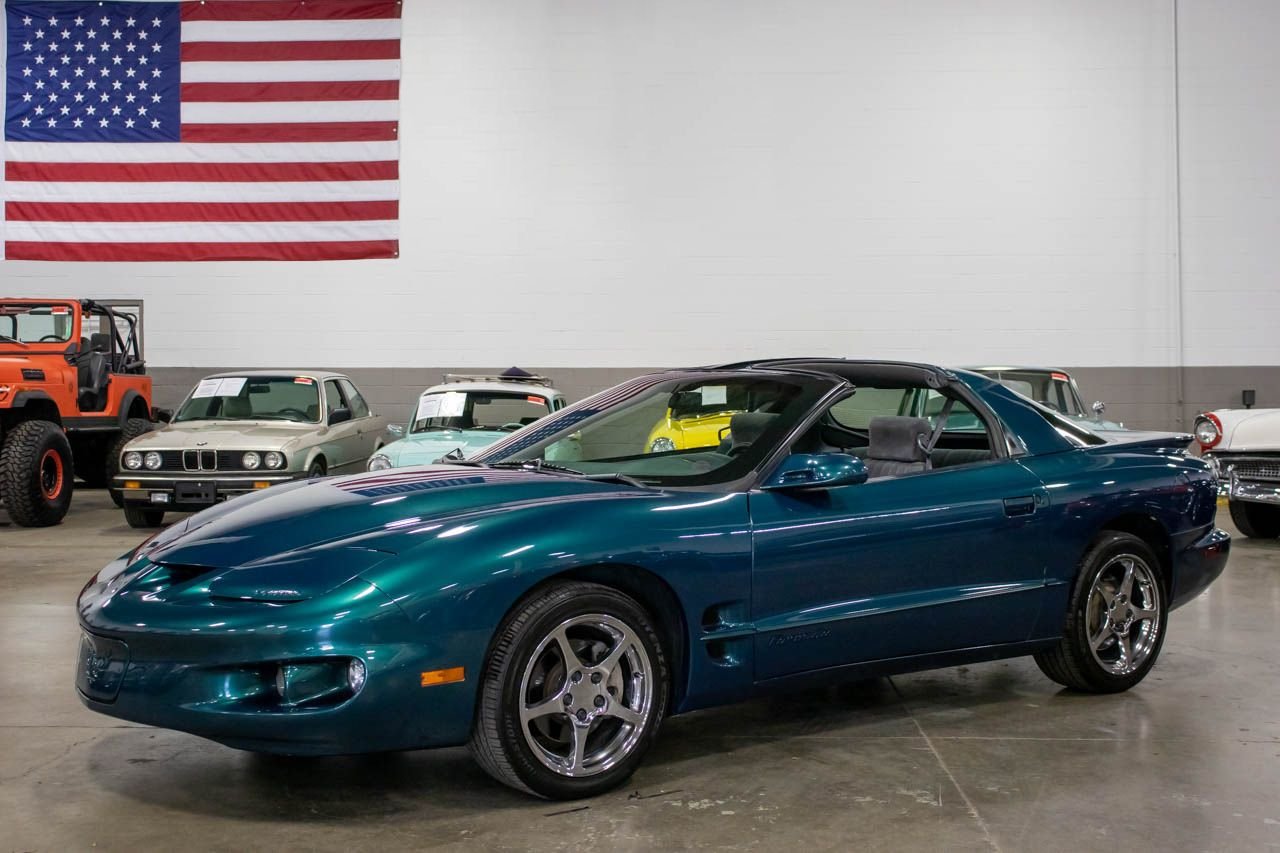 GR Auto Gallery is pleased to present this 1998 Pontiac Firebird Formula for your consideration. This Formula comes in a beautiful Mystic Teal Metallic exterior over a clean Gray interior. Powering this Pontiac comes with a 5.7 Liter V8 paired with an automatic transmission. This Firebird comes with some nice features such as; Power steering, power disc brakes, power cloth seats, power windows, cruise control, removable T-Tops, new headlight motors, aftermarket wheels, and Bazooka pillar speakers. Drive this one out of our showroom or have us assist with shipping it to you anywhere in the United States! Don't hesitate to give us a call with any questions or for more information.

The Pontiac Firebird is an American automobile that was built and produced by Pontiac from 1967 to 2002 model years. Designed as a pony car to compete with the Ford Mustang, it was introduced on February 23, 1967, five months after GM's Chevrolet division's platform-sharing Camaro. This also coincided with the release of the 1967 Mercury Cougar, Ford's upscale, platform-sharing version of the Mustang. The name "Firebird" was also previously used by GM for the General Motors Firebird in the 1950s and early 1960s concept cars. The fourth-generation Firebird amplified the aerodynamic styling initiated by the previous generation. While the live rear axle and floorpan aft of the front seats remained largely the same, ninety percent of the Firebird's parts were all-new. Overall, the styling of the Firebird more strongly reflected the Banshee IV concept car than the 1991 "facelift" did. As with the Camaro, major improvements included standard dual airbags, four-wheel anti-lock brakes, 16-inch wheels, rack-and-pinion power steering, short/long-arm front suspension, and several non-rusting composite body panels. Throughout its fourth generation, trim levels included the V6-powered Firebird, V8-powered Formula, and Trans Am. Standard manual transmissions were the T5 five-speed manual for the V6s and Borg-Warner's T56 six-speed manual for the V8s. The 4L60 four-speed automatic was optional for both in 1993, becoming the 4L60E with built-in electronic controls in 1994.