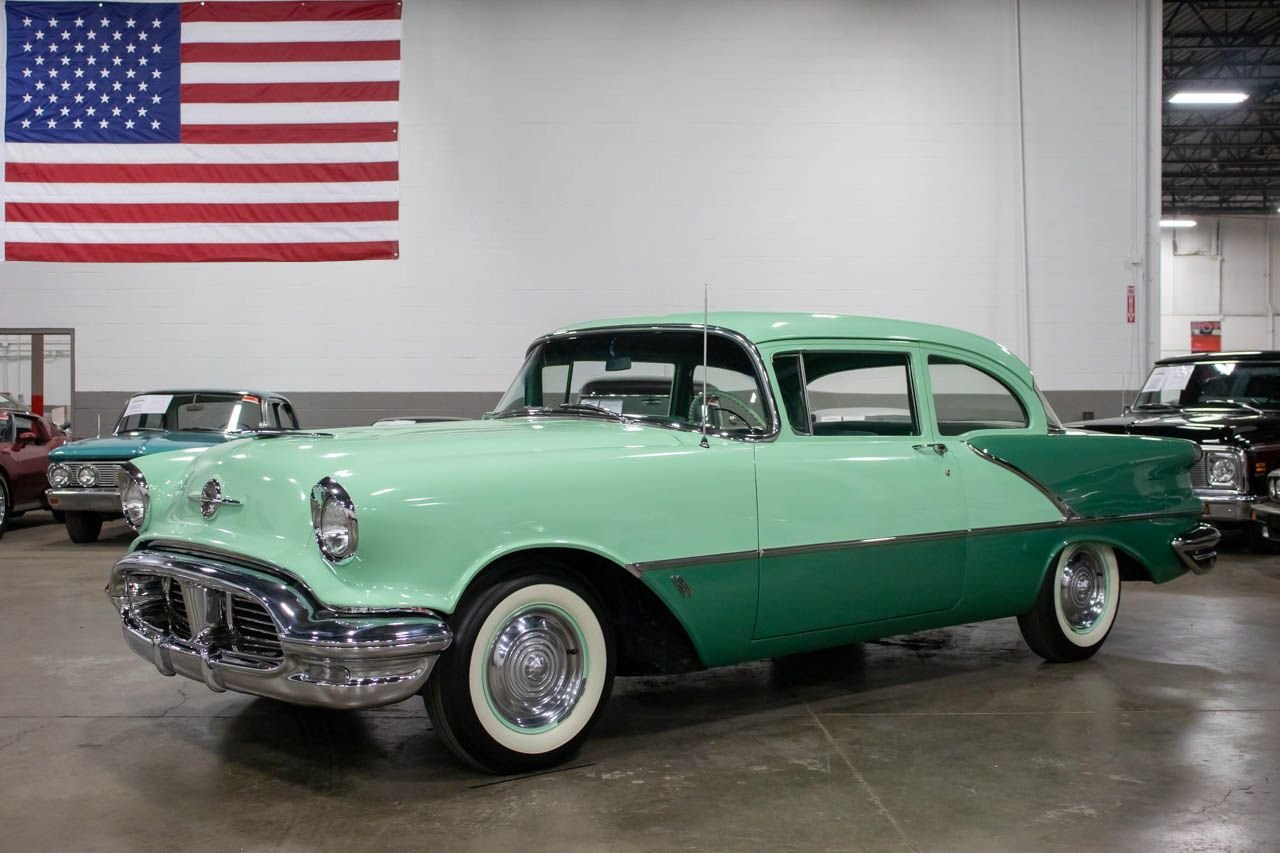 GR Auto Gallery is pleased to present this 1956 Oldsmobile 88 for your consideration. This 88 comes in a beautiful 2-tone Green exterior paint over a clean Green interior. A full frame-up restoration was completed on this vehicle in the mid 90's and it still shows very well inside and out. Powering this Oldsmobile is a 324ci V8 paired with an automatic transmission. This 88 comes with some nice features such as; new brakes, a new steering box, drum brakes, and a radio. This Olds fires right up and runs down the street straight and smoothly. Drive this one out of our showroom or have us assist with shipping it to you anywhere in the United States! Don't hesitate to give us a call with any questions or for more information.

The Oldsmobile 88 (marketed from 1989 on as the Eighty-Eight) is a full-size car that was sold and produced by Oldsmobile from 1949 until 1999. From 1950 until 1974, the 88 was the division's most profitable line, particularly the entry-level models such as the 88 and Dynamic 88. The 88 series was also an image leader for Oldsmobile, particularly in the early years (1949–51), when it was one of the best performing automobiles, thanks to its relatively small size, lightweight, and advanced overhead-valve high-compression V8 engine. This engine, originally designed for the larger C-bodied and more luxurious 98 series, also replaced the straight-8 on the smaller B-bodied 78. With the large, high-performance V8, the Oldsmobile 88 is considered by some to be the first muscle car, although this title is disputed. Naming conventions used by GM since the 1910s for all divisions used alphanumeric designations that changed every year. Oldsmobile starting after the war changed their designations and standardized them so that the first number signified the chassis platform, while the second number signified how many cylinders. A large number of variations in nomenclature were seen over this long model run — Super, Golden Rocket, Dynamic, Jetstar, Delta, Delmont, Starfire, Holiday, LS, LSS, Celebrity, and Royale were used at various times with the 88 badges, and Fiesta appeared on some station wagons in the 1950s and 1960s. The name was more commonly shown as numerals in the earlier years ("Delta 88", for example) and was changed to spell out "Eighty-Eight" starting in 1989.