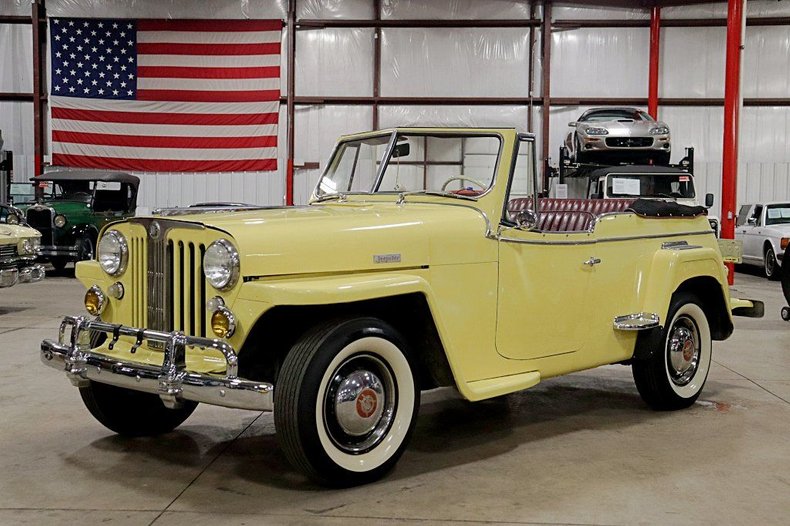 1948 was the first year for the Willys Jeepster. It was a break from the norm for Jeep who were now focusing on postwar stateside sales. They were anticipating that returning GIs would buy them as they came home from the war. It was to be a more sporty version of the Willys they had fallen in love with while overseas, a new concept of a sport utility vehicle. Equipped with Go Devil flathead four cylinder engine and a Borg Warner Synchromesh three speed with overdrive, they were zippy and fuel efficient. However they were not quite the sales hit Willy's had hoped for, and a relatively small amount of units were sold making them evermore rare.

GR Auto Gallery is pleased to offer this 1948 Willy's Jeepster for consideration.
Finished in Fiesta Yellow it has very nice brown leather seats and fresh gray carpets. The interior is in fantastic shape and shows well. The trim is clean and really pops against the fiesta yellow. The convertible top is in good shape and the side curtains are clear to see through. This Jeepster happens to have had the engine upgraded to a more powerful Kaiser inline 6 cylinder. This jeepster also has all new glass, a new rear bumper with the Willys logo, rebuilt steering box, and new rubber mats. The electrical system has been upgraded to a 12 volt system with a new alternator and period correct turn signals.

This 1948 Willys Overland Phaeton Jeepster is a great example of a first year Jeepster. The 6 cylinder engine really sets this Jeepster apart from the rest. This Jeepster is sure to snag looks of interest and admiration anywhere it goes.