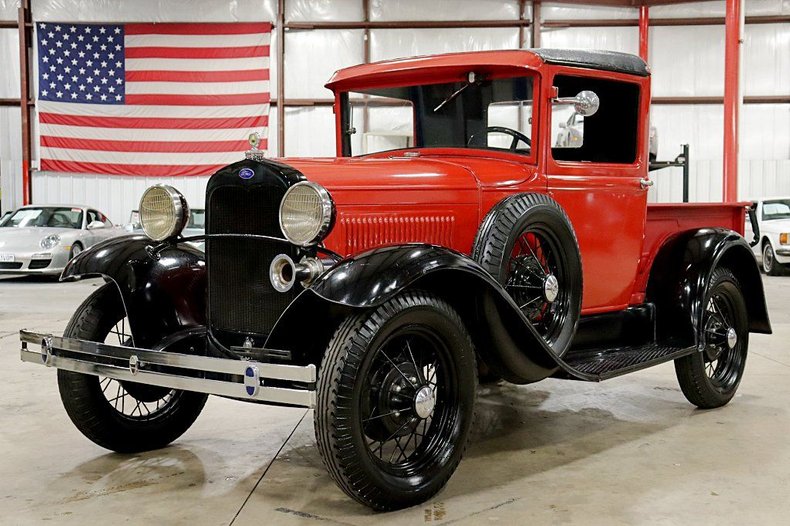 GR Auto Gallery is pleased to offer this 1930 Ford Model A Pick-Up for your consideration. The truck is powered by a smooth-running 3.3L I4 that is mated to a 3-speed manual transmission. This beautiful piece of history appears to have the proper engine and transmission for this era.

The red exterior over black fenders shows well. It shows some age here and there but is in overall very good condition. The wood in the bed is solid and shows well. The interior is neat and tidy and the chrome shines well. The engine compartment is painted and shows great. It has new spark plugs and a new water pump. The truck also has a fender mounted spare tire. The black top remains in great condition as well.

Now is your chance to own a wonderful Model A that is all steel and in great working condition. Please call or email today with any questions or for additional information.

The Ford Model T had dominated the automotive market from the mid-1910s through the early 1920s but started to erode as competitors began catching up with Ford's successful mass production system. It had become apparent to most in the company that it was time to begin a new model, but Henry Ford was resistant. With “luxury” features coming out such as electric starters in most of General Motors products, newer exterior designs fit the era they were entering, Ford was forced to compete and began their Model-A design. At first, Henry did not want to worry about looks or features but to spend their energy on the mechanical aspects which had been the primary reason for success on their Model T. Although many improvements with the engine power and overall stability were improved, it proved to be short of what was necessary, a new cosmetic appeal. For this Henry called upon his son, Edsel, who showed how successful it could be with his design. After years of compliments on its curb appeal, Henry started to take credit for it himself although his son was more hands-on with this project. The era of mass production had officially passed and the era of “flexible mass production” had begun and regardless of who was more responsible for this model, Ford, in general, showed once again how well they could adapt and stay on top.