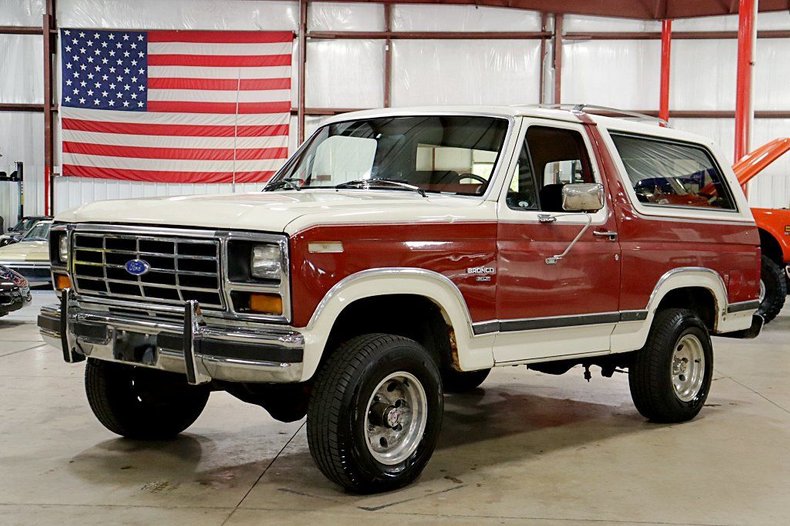 The Bronco was introduced in 1966 as a competitor to the small four-wheel-drive compact SUVs that included the Jeep CJ-5 and International Harvester Scout; it was built on its own platform. A major redesign in 1978 enlarged the Bronco, using a shortened Ford F-Series truck chassis to compete with the similarly adapted Chevy K5 Blazer and the Dodge Ramcharger. Most Broncos are equipped with a swing-away spare tire carrier on the outside of the rear door. The third generation beginning development in 1977 (before its predecessor was released for sale) the 1980–1986 Bronco was designed to address many concerns that held the 1978–1979 Bronco out of production. Nominally shorter and lighter, the 1980 Bronco was designed to adopt a more efficient powertrain while retaining its full-size dimensions.

GR Auto Gallery is pleased to present this 1986 Ford Bronco XLT for consideration. It is finished in red and white over a red interior. The truck shows some age but is in overall very good condition. It is powered by its peppy 5.8L 351 Windsor v8 paired with an automatic transmission that functions as it should. According to the owner the engine has been rebuilt and given a high torque cam, Edelbrock carburetor and manifold. The truck spent its life in the dry climate of Arizona, whick is why it remains so solid. Other highlights include power brakes, power steering, air conditioning, full size-rear mounted-swing away spare tire, Kenwood CD player, tow package, center console and cruise control.