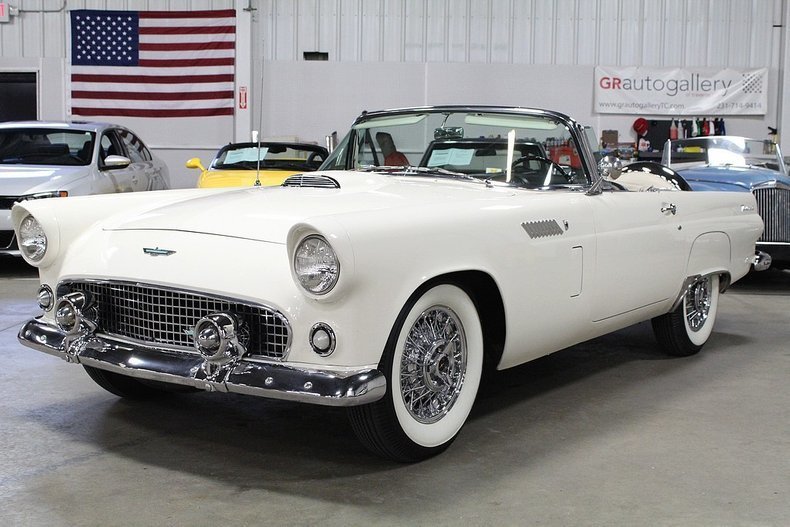 So, we all know that the first Thunderbirds were a two-seat convertible produced by Ford and often referred to as the Baby Bird. It was in direct response to the Corvette. It was first marketed as a “Personal Car” focusing more on driver comforts and features rather than performance, however with its small light weigh stature and powerful V8 engine, it could hold its own quite well. This car was assembled in Detroit on March 30, 1956, it was one of only 15,631 examples produced that year. This Thunderbird still retains its original engine and transmission along with its Ford-O-Matic transmission, power steering, power seat, power brakes and Kelsey Hayes wire wheels. In addition, the mileage of just over 40,000 is believed to be true and accurate based on a legal notarized document from AZ in 2001 stating that at that time, the car had been owned by its 2nd owner for almost 32 years. The letter went on to stat that the car was traded in to Read Mullan Ford in Phoenix, AZ by its first owner in 1969 and they purchased it with 33,000 miles. Throughout the years the car had been touched up as scratches and things ensued and finally at some point after 2001 a new paint was done. However the paint is the only thing that has been done, the rest of the car appears to be all original with no signs ever of collision or rust corrosion. The chrome is in excellent condition as is everything else. All is in perfect working order including the clock. I am truly amazed also at how well this car drives. It starts perfectly with no leaking or smoke and goes down the road quiet and smooth with plenty of power. The colonial white exterior garners plenty of attention. The car comes with its original window sticker and owners manuals along with the original signed and notarized document. The third owner donated the car in 2001 to a church, it was then sold to a high bidder. This car has always been perfectly stored and lovingly cared for. There are plenty of mediocre tri-five Thunderbird out there for mediocre pricing, however this is not one of them. This car is quite amazing from top to bottom.