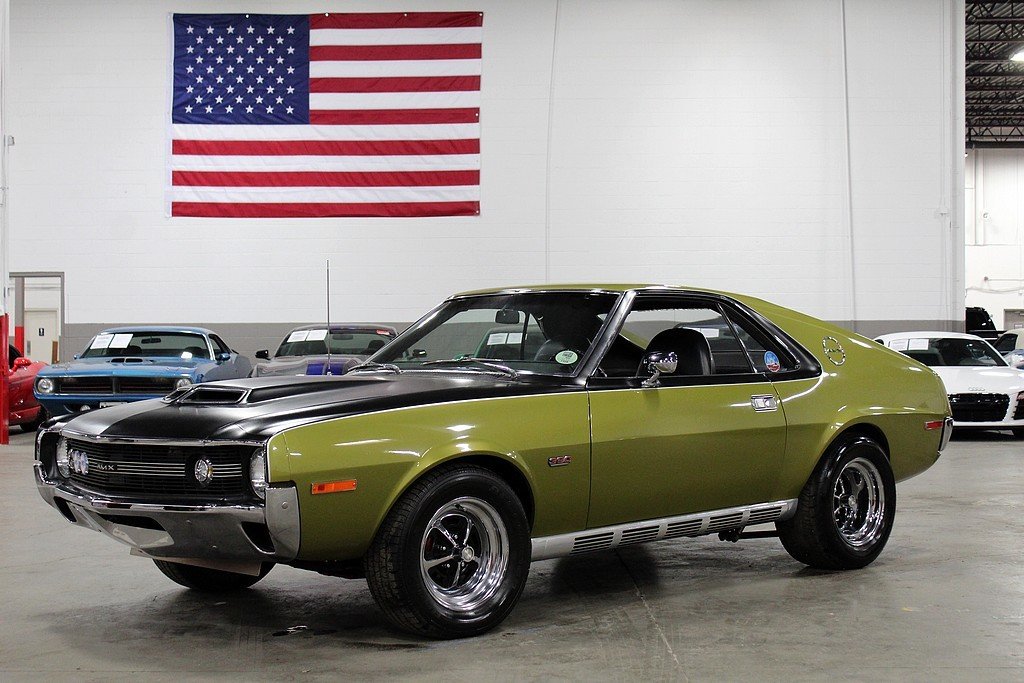 GR Auto Gallery is pleased to present this gorgeous 1970 AMC AMX. This killer AMX is a bit of a celebrity being featured in such publications as Car Craft, Muscle Car Enthusiast and Woodward Dream Cruise magazine. Its no surprise the AMX has received the notoriety that is has, turning heads with a stunning Golden Lime paint job that is complimented by a
jet black interior. Powering this monster is massive 426 cubic inch stroker motor mated to a stout manual transmission. The 426 is topped with a rare Edelbrock cross ram intake and two Holley carburetors. Additionally the AMX features a Control Freak tubular front suspension with QA-1 coil over front shocks, Cal-Tacs rear axle control links and front disc breaks. This outstanding vehicle was built by a well known local muscle car shop by and for the owner. So you know that everything was done properly. Don't miss your chance to own this award winning AMC AMX. Please call or email us today for more information.

The AMC AMX is a two-seat GT-style sports car that was produced by American Motors Corporation for the 1968 through 1970 model years. The AMX was also classified as a muscle car, but "unique among other American cars at the time due to its short wheelbase". The AMX was also the only American-built steel-bodied two-seater of its time, the first since the 1955-1957 Ford Thunderbird. To a degree, the AMX was a competitor with America's only other two-seater of the era, the Chevrolet Corvette for substantially less money. With a one-inch (2.5 cm) shorter wheelbase than Chevrolet's two-seater, the AMX was often seen by the press as a "Corvette competitor”.