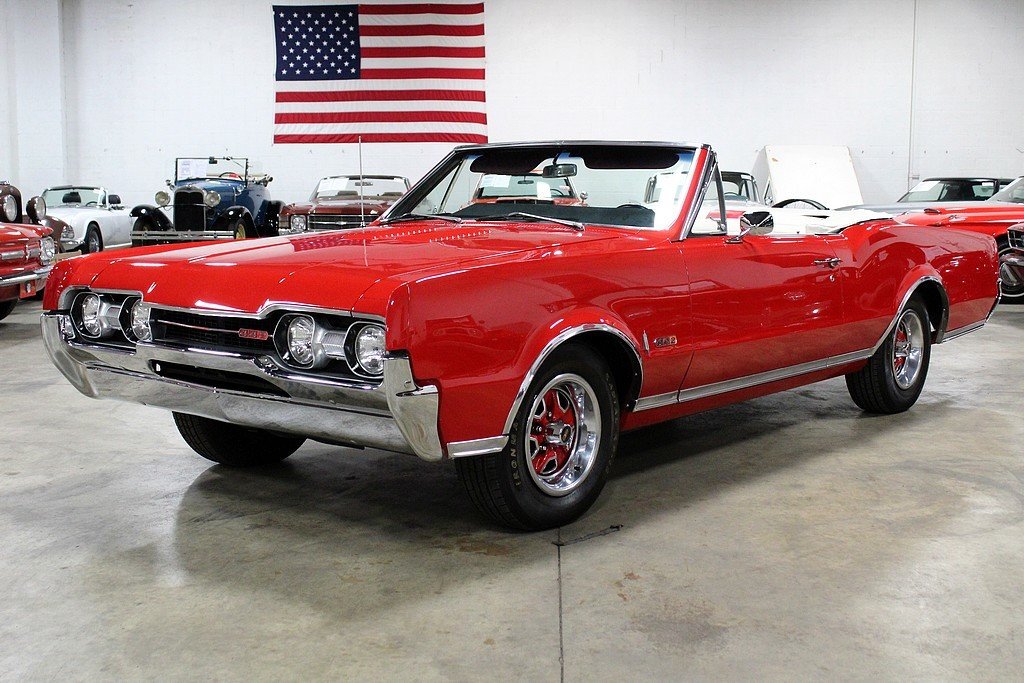 GR Auto Gallery is pleased to present this drop top V8 example of the 1967 Oldsmobile Cutlass. Built and Badged as a “442”, this tribute car is in nice condition inside and out. This Olds features a healthy 455ci V8 with a single 4 barrel D/F Holley carburetor, Edelbrock single-plane aluminum intake, HEI, headers with dual exhaust, Flowmaster mufflers, turbo 350 with console floor shift and 15-inch Rally wheels. The exterior is dressed in Red over a White and Red interior and a White top. The car also features front bucket seats, power steering, power front disc brakes and a new paint job. Please call or email us today for more information on this 1967 Oldsmobile Cutlass 442.

The Oldsmobile Cutlass was a marque of automobiles produced by General Motors' Oldsmobile division between 1961 and 1999. At its introduction, the Cutlass was Oldsmobile's smallest model; it began as a unibody compact car, but saw its greatest success as a body-on-frame intermediate. The Oldsmobile 4-4-2 is a muscle car produced by Oldsmobile between the 1964 and 1980 model years. Introduced as an option package for US-sold F-85 and Cutlass models, it became a model in its own right from 1968 to 1971, spawned the Hurst/Olds in 1968, then reverted to an option through the mid-1970s. The name was revived in the 1980s on the rear-wheel drive Cutlass Supreme and early 1990s as an option package for the new front-wheel-drive Cutlass Calais.