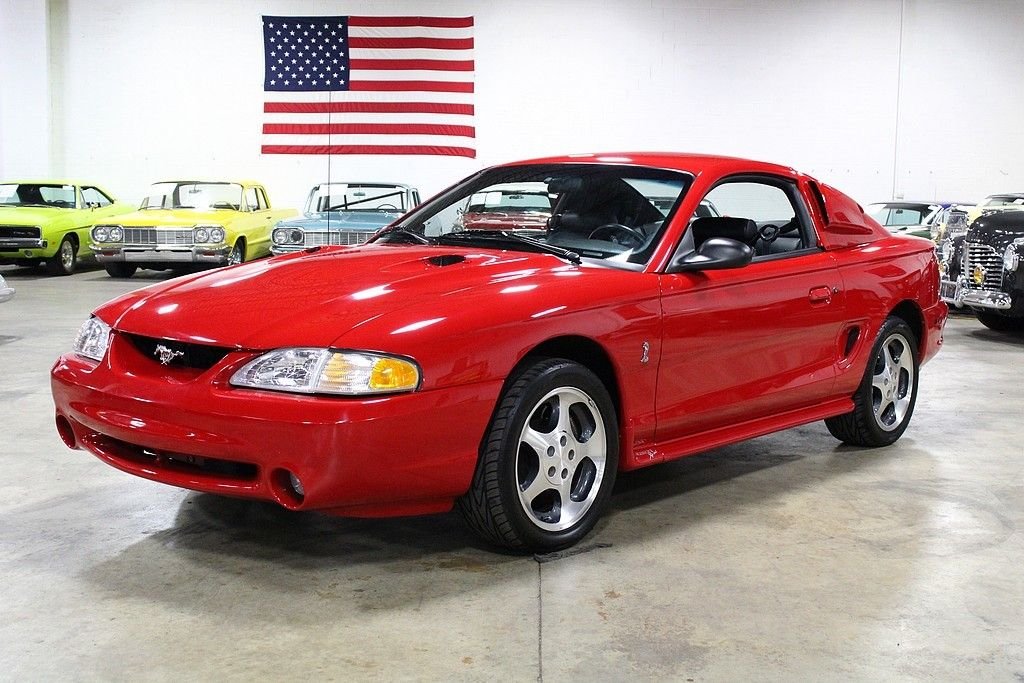 The fourth generation Ford Mustang is an automobile produced by American manufacturer Ford for the 1994 through 2004 model years. For 1994 the Ford Mustang underwent its first major redesign in fifteen years. The design, codenamed "SN-95" by Ford, was based on an updated version of the Fox platform. The Ford SVT Mustang Cobra (also known as SVT Mustang Cobra, SVT Cobra, or simply as Cobra) is a muscle car model that was built in model years 1993 through 2004 by Ford Motor Company's Special Vehicle Team division (or SVT, for short). The SVT Cobra was a high-performance version of the Ford Mustang. For 1996, Ford finally retired the aging 5.0L V8 in the Mustang GT and SVT Cobra, replacing it with a new aluminum 4.6L DOHC modular unit that was smoother and had slightly better fuel economy. Starting with the 1996 model year, every Cobra engine was hand-assembled by two-person teams at the Ford Romeo Engine Plant in Romeo, Michigan a practice that continued through the remainder of SVT Cobra production.

GR Auto Gallery is pleased to present this extremely well maintained and documented 1997 Ford Mustang SVT Cobra. This Cobra is finished in a Red over Black leather interior. The car is powered by its 4.6 Liter Dual overhead cam engine, 5-speed manual transmission and rear wheel drive. This Cobra has spent most of its life in the garage featuring only 16,985 original miles on the engine and the body. As most Cobra's, this car comes well optioned including leather seating, power steering, power brakes, power windows, power locks, air condition, rear defrost, chrome Cobra wheels, vented hood and much more. The current owner of this Cobra did some small modifications; added a Basani exhaust system, a cold air intake and also the side scoops. The Ford mustang began new life with the Fox Body 5.0 cars hit the scene in the 80's. The reintroduced power to the American auto consumer and Ford could not keep them on the shelves. This 1997 Cobra is a link in the natural progression of these cars that are still leading today's American performance automotive scene. Since 1964, every generation of the Ford Mustang is significant. The Cobra SVT is another stepping stone to greatness. Please call or email us today for more information.