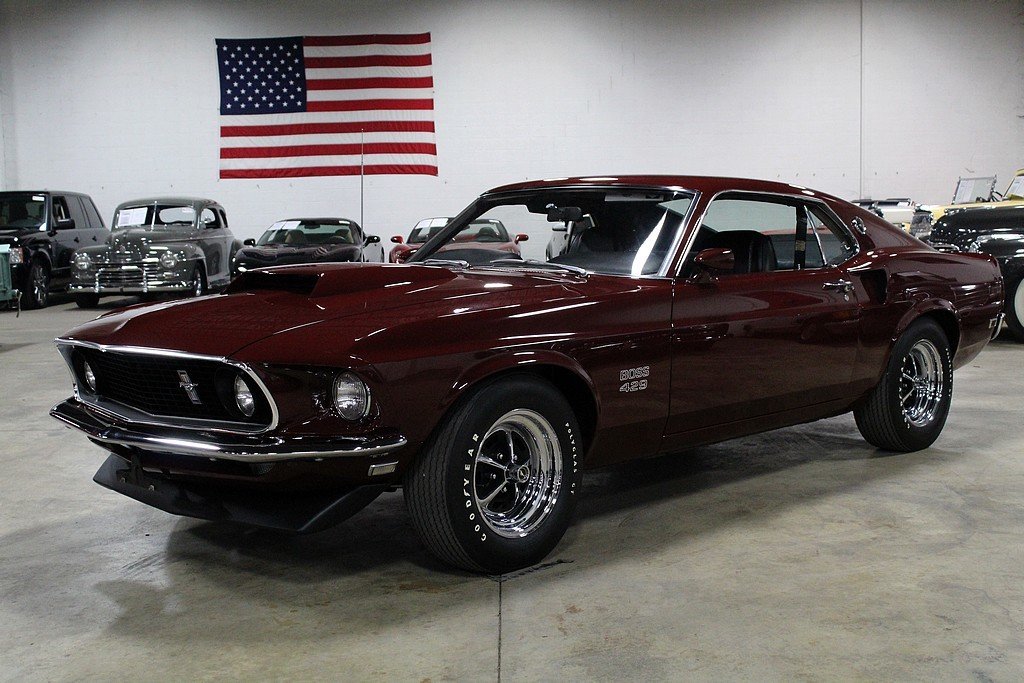 The Boss 429 Mustang is a high-performance Ford Mustang variant that was offered by Ford in 1969 and 1970. The Boss 429 (also known as the "Boss 9" by enthusiasts) is arguably one of the rarest and most valued muscle cars to date. In total there were 1358 original Boss 429s made. The origin of the Boss 429 came about as a result of NASCAR. Ford was seeking to develop a Hemi engine that could compete with the famed 426 Hemi from Chrysler in NASCAR's Sprint Cup Series (then known as "Grand National Division"). NASCAR's homologation rules required that at least 500 cars be fitted with this motor and sold to the general public. After much consideration, it was decided by Ford that the Mustang would be the car that would house this new engine.

GR Auto Gallery is pleased to present this 1969 Ford Mustang Boss 429 for your consideration. According to the Deluxe Marti Report, this Pony was first delivered to Front Royal Motors, INC., of Front Royal Virginia. It was produced in April of 1969, built in Dearborn, Michigan, it was spec'd in Royal Maroon with Black Clarion Knit Vinyl Hi-Back Seats. In addition to the 429ci high output v8 engine, four-speed manual transmission, and traction-lok differential, it was equipped with the visibility group. Some key features of this Pony include; KK no. 1692, matching numbers 429ci engine and drivetrain, just over 36,000 original miles, engine compartment is original and unpainted, one full repaint in the original Royal Maroon, rear trunk area is original, unpainted, and included original spare tire and inflation bottle, period correct polyglass tires, Autolite battery and 1969 date-coded windshield, Concours restoration that was completed in 2012, all original body, all original interior, included partial factory build sheet, original dealer invoice, original Kar Kraft invoice, deluxe Marti report, and this vehicle was even owned by Jeremy Feller of the Boss 429 data base. According to the owner, this vehicle starts easily and runs strong and the transmission shifts smoothly through all gears. Please contact us for more information on this 1969 Ford Mustang Boss 429.