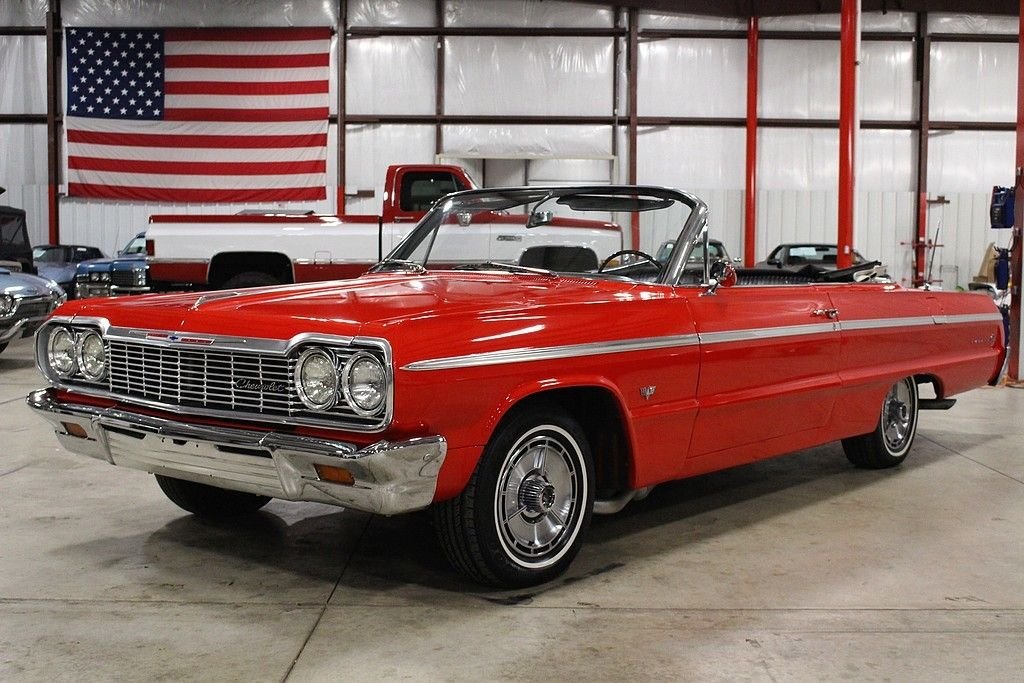 Coming off a successful year in 1963, Chevrolet continued its popular Impala model for the 1964 year with minor adjustments to the design and even some of the mechanicals. With a smoother finish overall, Chevy shaved off the pointy edges of the models before and added a more curved grille. The rear showed as a different car as well with its new “U” shape design surrounding the tail lights which went the full length of the back. All transmissions were refined as well adding a quieter 3-speed syncro-mesh automatic option and also adding an aluminum housing on the 4-speed option. The 1964 model year was a big one for the muscle car genre and that became very evident after the release of the Chevelle that same year.

GR Auto Gallery is pleased to present this example of the 1964 Chevrolet Impala SS Convertible for your consideration. With most of these performance minded models being built into coupes, the convertibles were not the choice often picked when they were first built but have since become a rare collector car due to that very fact. As we walk through the trim tag we see that this Impala SS was built first week of June in Tarrytown NY. With the trim tag code 1467 it shows that it is a SS convertible, finished in ember red with paint code 922. Code 815 shows that it came with black bucket seats. According to the owner, the engine is believed to be a 327 and has a block number of 3892657. The engine has been professionally prepared and has a few upgrades consisting of an Edelbrock intake, chrome valve covers and air cleaner, 4x2 carburetor set up consisting of Weber carbs, Hedman headers, MSD blaster 2 coil, MSD distributor, MSD wires, Edelbrock fuel pump, Be Cool aluminum radiator, polished aluminum alternator. The engine runs great and has plenty of power. It is paired with a 4 speed manual transmission. The black leather interior consisting of bucket seats presents well. There are a few aftermarket gauges consisting of RPM, oil pressure, engine temperature and voltage. The SS impala has a center console. Also included are a spare tire, jack and wheel skirts. The chrome and trim are new. The car rides on its original rims with the SS hubcaps.