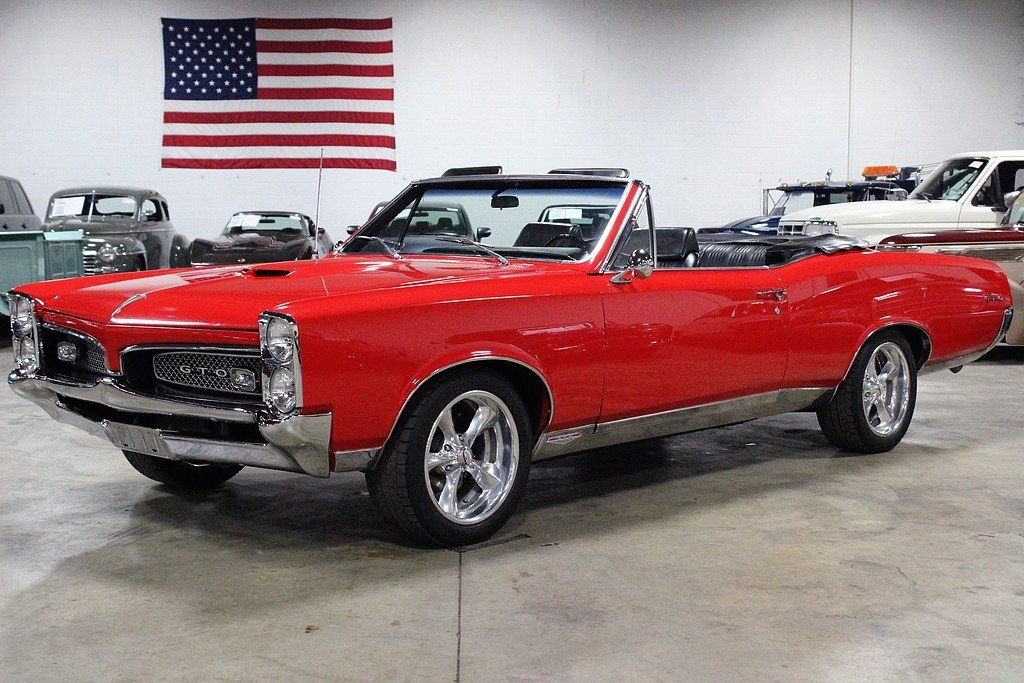 The Pontiac GTO is an automobile that was built by Pontiac in generations from 1964 to 1974 model years, and by GM's subsidiary Holden in Australia from 2004 to 2006. The first generation GTO was a muscle car of the 1960s and 1970s era. Although there were earlier muscle cars, the Pontiac GTO is considered by some to have started the trend with all four domestic automakers offering a variety of competing models. For the 1964 and 1965 model years, the GTO was an optional package on the intermediate-sized Pontiac Tempest (VIN 237...). The GTO became its own model from 1966 to 1971 (VIN 242...). It became an option package again for the 1972 and 1973 intermediate Le Mans. For 1974, the GTO option package was offered on the compact-sized Ventura. The GTO was selected Motor Trend Car of the Year in 1968.

GR Auto Gallery is pleased to present this gorgeous 1967 Pontiac GTO for purchase. This thoughtfully restored example has been owned by the same individual for the last 13 years, it had a great deal of its restoration done about eighteen years ago and road time has been limited to cruises and sunny soaked drives and is in great condition. This model hosts a 400 crate engine that has bored and stroked out to 462ci and only has been driven around 400 miles on it since the most recent rebuild according to the owner. Along with the upgraded engine, this GTO features an upgraded Turbo 350 3 speed automatic transmission, upgraded rear end, MSD ignition and upgraded fuel pump. The black interior is also in wonderful condition, all gauges appear to be working as they should, all exterior lights and latches also show no issues according to our inspection. The vin decodes accurately to show it is a true GTO built out of the Pontiac, MI factory and was originally a 2-dr convertible. A great find for all those who love the old GTO style but with a lot of attention to keeping it in great running and looking order, call or email us today for more information on this vehicle!