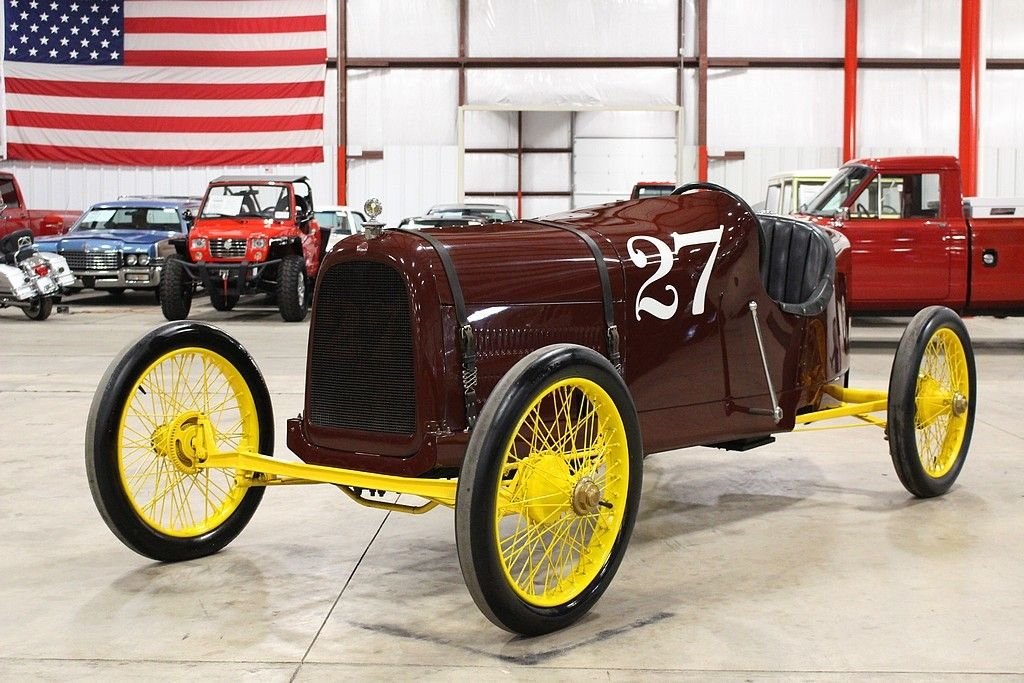 Board Track and early speedway racing in the early days was something that can be described as wild and loose. Some say that the birth of automotive racing began when the second motorcar was produced. Since the beginning, someone was always looking for an edge, to try something new…more speed. Board Track and early Speedway racing was all about going faster and less about safety. Big wheels, different gear ratios, lower suspension and high compression heads all root back to these days of racing glory. The people who designed these cars were creating technology, not building on what has already been done. Cars of this era were all different as rules and regulations were liberal and the drivers who campaigned them stretched the limits of courage and skill. During the early 20's Board Tracks began popping up all over the US as demand for the spectacle grew, they were relatively in expensive to build, however the cost of maintenance was high and the life of a board track rarely lasted over 3 years. The excitement was high and but the era was short. Speedway racing on the other hand lives on. May 2017 will mark the 101st running of the Indianapolis 500 and to this day remains “The Greatest Spectacle in Racing”.

We are pleased to offer this enthusiast inspired, 1922 Indy Speedway / Board Track Race Car. The inspiration to build this car came from a local collector and enthusiast when he acquired an original set of 5, 30 inch Phelps racing wheels that are said to have run in the Indianapolis 500 in 1922. The history and mystique of these wheels inspired some research, and a project to build a classic racer from the early 20's was born. The car is built with nearly all vintage parts from the 20's that were carefully acquired over some time. The car is built on an early 20's chassis, The engine is a Ford Model T fortified with an authentic RAJO overhead valve head, Warford reversible overdrive transmission that has two set ups: Board Track and Speedway overdrive, Authentic Frontenac front spring perches which were specifically designed for cars that ran Indianapolis during that era allowing the car to set lower to the ground, rear spring perches had to be fabricated but patterned from an original piece, 1 Ton Model T truck king pins, Winfield Carburetor, Rocky Mountain Brakes, Whippet Radiator, Black Leather 2 Person Cockpit etc. The body of this car is stunning. It was constructed and hand formed in aluminum done by Jim Mann. Jim Mann is the premier classic and vintage Indy car restorer on the planet. His restorations have received world recognition and his had crafted tributes have the reputation of being the best. This one off body was formed and crafted to best represent a Harry Miller style body of early 1920's. It best represents a 1922 vintage Miller Board-Track / Speedway racecar. 1922 was the last year for this type of racecar, which was designed and built as a 2-seater for driver and mechanic. The car was completed in the early 90's and the result was stunning; a working and performing authentic recreation of a 1920's speedway / board track racer. Since completion, the car was maintained and campaigned for nearly 15 years. Not just used in shows and parades, but was also driven at speed at Indianapolis Motor Speedway and Berlin Raceway in Grand Rapids, MI. The car is configured in its board track set up which will reach speeds in excess of 75 miles per hour, and will achieve much higher speeds in Speedway set up. The driver is quoted that the car is very stable and handles great at these speeds. The Warford reversible overdrive transmission enables to change set ups relatively easily. Today the car remains in excellent mechanical and cosmetic condition. The motor fires right up and sounds magnificent through its long tube straight pipe exhaust.
One must appreciate the thought, design and effort that went into the build of this car. The parts used are nearly all, authentic performance parts of that era: Wheels, chassis, engine, transmission, brakes, spring perches…the entire running gear. Researched, tracked down, hand picked, and masterfully refurbished to build this masterpiece. This is a great addition to any collection and this car is well received at any classic and collector venue. Your can not come close to building this car to this level at the price offered here. THIS CAR IS BEING SOLD AS A RACE CAR AND SOLD ON A BILL OF SALE ONLY.