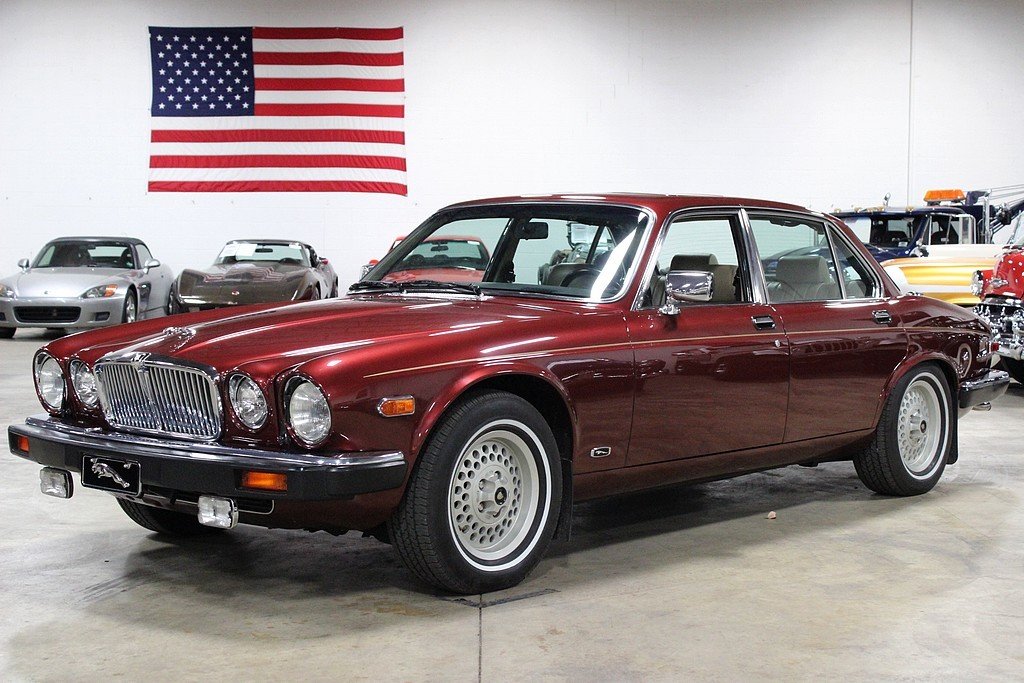 The Jaguar XJ is the name of a series of flagship, full-size, luxury cars sold by the British automobile brand, Jaguar Cars. The XJ line has had a long history, with the first model released in 1968. The original model was the last Jaguar saloon to have had the input of Sir William Lyons, the company's founder, and the model has been featured in countless media and high-profile appearances. The current Jaguar XJ was launched in 2009. It is one of the official cars of the royal families and UK Prime Minister. The XJ12 version was announced in July 1972, featuring simplified grille treatment, and powered by a 5.3 L V12 engine (coupled to a Borg Warner Model 12). The car as presented at that time was the world's only mass-produced 12-cylinder four-door car, and, with a top speed "around 140 mph” (225 km/h) as the "fastest full four-seater available in the world today". Although it had been the manufacturer's intention from launch that the XJ would take the twelve-cylinder engine, its installation was nonetheless a tight fit, and providing adequate cooling had evidently been a challenge for the engineers designing the installation. Bonnet/hood louvres such as those fitted on the recently introduced twelve-cylinder E Type were rejected, but the XJ12 featured a complex cross-flow radiator divided into two separated horizontal sections and supported with coolant feeder tanks at each end: the engine fan was geared to rotate at 1¼ times the speed of the engine rpm, subject to a limiter which cut in at a (fan) speed of 1,700 rpm. The fuel system incorporated a relief valve that returned fuel to the tank when pressure in the leads to the carburetters exceeded 1.5 psi to reduce the risk of vapour locks occurring at the engine's high operating temperature, while the car's battery, unusually, benefited from its own thermostatically controlled cooling fan.

GR Auto Gallery is pleased to present this well-equipped extremely rare example of the 1990 Jaguar XJ12 Series III Vanden Plas Sedan for your consideration. From top to bottom this vehicle has very little age showing with its plush leather interior in great shape, feature list much longer than most any nineties model, the paint and trim have all been very well kept and with its car cover it is clear to see the care that was given to this vehicle! From the outside, you will see its rare factory pepperpot wheels which are in great condition as well as its wonderful Regency Red exterior that shows very well on this model. The interior is just as well and has great features such as cruise control, AC which blows cold, power windows, locks, steering, brakes, added 6-disc CD changer and even power sunroof which all function, the information center gives you a plethora of choices to digitally read what is going on with your vehicle and overall this vehicle was clearly well ahead of its time. With its owner manual, car cover, this vehicle is complete and with many years left to be enjoyed! Call or email us for more information on this excellent looking example of the Jaguar XJ12!

What makes this Jaguar especially rare is according to the owner it is only 1 of approximately 70 Canadian model, is not only the highest trim package for this model in the Vaden Plas but also the well-known and recognizable Jaguar V12 engine which is a high-efficiency 5.3 HE version debuted in 1981. This used the special high-swirl design "May" cylinder heads and had an unusually high compression ratio. In any given market, power levels remained similar to the previous model, but fuel economy was improved by nearly 50%. This Jaguar was meticulously cared for with receipts and a Concours score of 99.89, with judging sheet from the event.