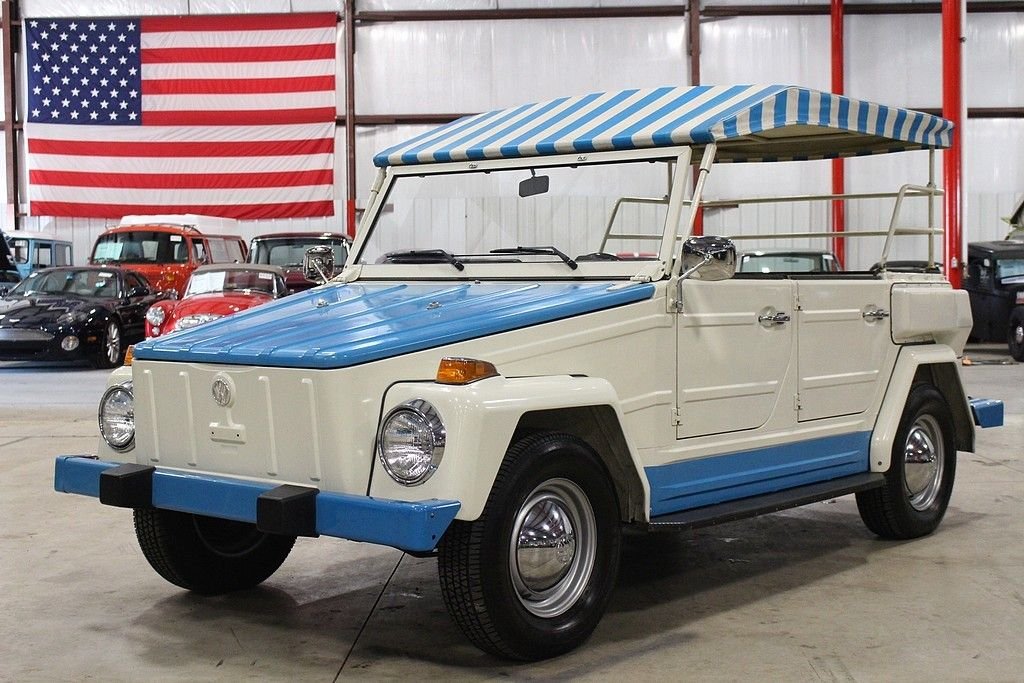 Grab a cup of coffee, beer or glass of your wine and get ready for story time courtesy of the GR Auto Gallery. VW introduced the Type 181 the VW Type 181 was first designed in 1969. It was called by various names in different countries including Trekker, Thing, & Safari. The Type 181 models were built at several VW factories in Germany, Mexico, & Indonesia between 1969-80 with 140,000 vehicles built. It was originally designed and engineered as a vehicle for European NATO forces. In America, Things were only sold in 1973 & 1974, built at the VW factory in Puebla Mexico. There were 25,000 Things imported into the USA in 1973-74 and 14,733 of those were 1974 models. They were all sold through the VW of America dealership network.

At some point in 1971-72 the prestigious vacation resort The Princess Hotel obtained a few Things to transfer their customers and guests from the airport to the resort and around the town of Acapulco Mexico. Over a short period of time many US residents loved the look of these and requested and lobbied VW to produce a special run of these for sale in the USA. The Acapulco edition was built over a three month stretch in May thru July of 1974. It is believed that only 400 of these were produced in the traditional blue and white combination. The uniqueness of the Acapulco and identifying one carries some key attributes. VIN#'s that start with 184254xxx, black running boards with Allen head bolts into the fenders and unique mounting plates inside the funders, blue/white paint scheme on both sides of the dash panel front hood the rocker panels up to second rib the license plate hood and the bumpers and bumper brackets. Glove box cover was deleted. Seats were all done in the two tone stripped vinyl seat covers to match the Surrey top that was mounted to the windshield pillar at the upper door hinge bolts.

This car is believed to be #2 of the run and is a pristine original Acapulco edition that has never been modified, restored, or altered from when it was new. That is extremely important as there are others on the market that have been completely restored or duplicated to mimic the true Acapulco vehicle. This is the real deal and owner history, vehicle history and mileage is all original from new. Car retains all original features and trim from new minus the right rear fender was painted at some point. Vehicle remains in stock and authentic original condition that is unheard of with the VW Thing. Many highly educated and well known VW experts have viewed this car and will agree that this is the nicest original condition VW Acapulco edition Thing in existence. Car was sold originally out of Van Slyke VW in Knoxville TN to Lucille & Russell Weaver in August 21st of 1974. Car was then sold to an avid collector in Sausalito California where he retained the car from 2006-2008. Traded once more to another collector that owned for until Feb of 2009 when it exchanged hands to the VW legend, Larry Dustman, owner of “The Thing Shop” Larry purchased this specific car because it was the most authentic Acapulco edition that he could find that was not altered from its factory specs. He used this car as the mold for duplicating parts for people that needed authentic and original style Thing parts as well as to produce recreation items for the Acapulco edition for the masses. He kept this car up until 2015 when it was sold to a friend and VW collector Jon House out of Hawaii. The car remained in Sand Diego with his large collection up until we acquired the vehicle recently. The miles are documented from previous owners and a lot of significant work went into tracking this car over the past 41 years. We retain a copy of the original MSRP, owner's manuals, DMV and registrations from previous owners, original spare tire, tool kit and documented history verifying the mileage. The vehicle runs incredibly well with easy shifting and braking. Gas gauge and speedo work properly and all lights work without hesitation.

This is neither your typical Thing nor a reproduction or highly restored original…this is an original that only happens once and with over an age of 41 and miles just over 36k this is a top contender for anyone that desires something special in their collection. You will not find another one like it with a pedigree history of ownership, proof of authenticity and one that will never be on the market again like this. This is why people shop our inventory, because we have the vehicles that no one else does.