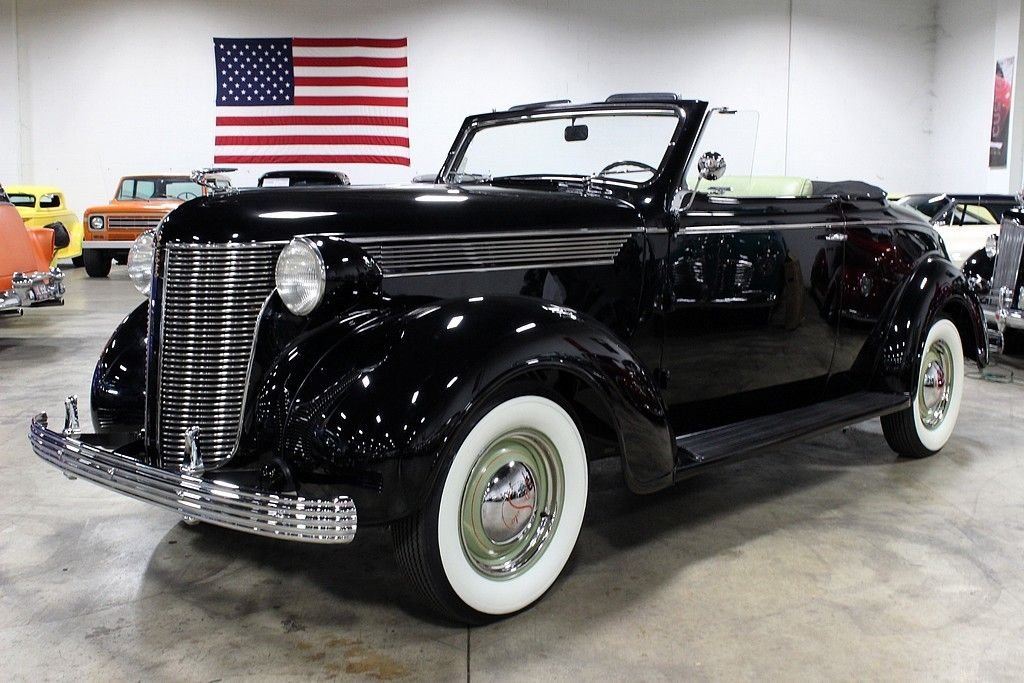 The DeSoto make was first released in August of 1928 and was founded by Walter Chrysler. The first model year was released to the public in 1929 and was used as a mid-priced make to compete with other makes such as Buick, Oldsmobile and Studebaker. The name DeSoto came from the Spanish explorer, Hernando de Soto, and like its explorers lifestyle, this vehicle too was built to reach new goals and places. In its first year they had done just that as they were able to break the first-year sales record ever at over 80,000 units which stood as the benchmark for biggest releases until 1960 when Ford came out with the Falcon. Serving as a mid-priced option similar to the Dodge when first released, they decided after Chrysler was able to purchase Dodge that the mid-priced option would no longer need to be duplicated and the DeSoto was discontinued.
GR Auto Gallery is pleased to present this highly original and museum quality example of the 1937 DeSoto Convertible for your consideration. This is a real example of a true survivor, lies highly unmolested and is of the highest quality to this day even at almost 80 years old! The vehicle was first purchased through Wilkie DeSoto out of Buffalo, NY and was bought by its second owner in 1959 until the current owner was able to purchase it in 1998. There has been a full restoration to this vehicle which was done by its current owner and through Bodies by Ron out of Caro, MI. This vehicle comes with a great deal of documentation including its original build sheet which were usually found under the seats, a set of sales and option books have been reprinted to go with it as well as parts books, reproduction brochures and even a nice little printing of the patent which was placed on the design of the grill by Ray Dietrich. The engine is believed to be the original one placed in it at time of build and was fully rebuilt, had new cams and valves added and was then bored out “0.030. The transmission is believed to be true to this car as well and with a fully functioning overdrive feature which really goes a long way in making this a comfortable ride.
With a few upgrades including turn signals, mechanical brake light switch added, seat belts added, the fuel tank was coated inside to allow for ethanol gas to be used, a master electrical switch was installed behind the driver side seat and a new optimal battery installed to ensure a smooth start. This vehicle is a very rare find as there were only 991 total examples made and with much fewer known to exist. The interior is like new with a wonderful green dye used to bring back the original looking color, the overall look from inside and out is as it should be if you were to look at it when it was first built! Call or email us today for more information on this rare beauty.
To see over 80 photos of this car, including under carriage please visit our website www.grautogallery.com