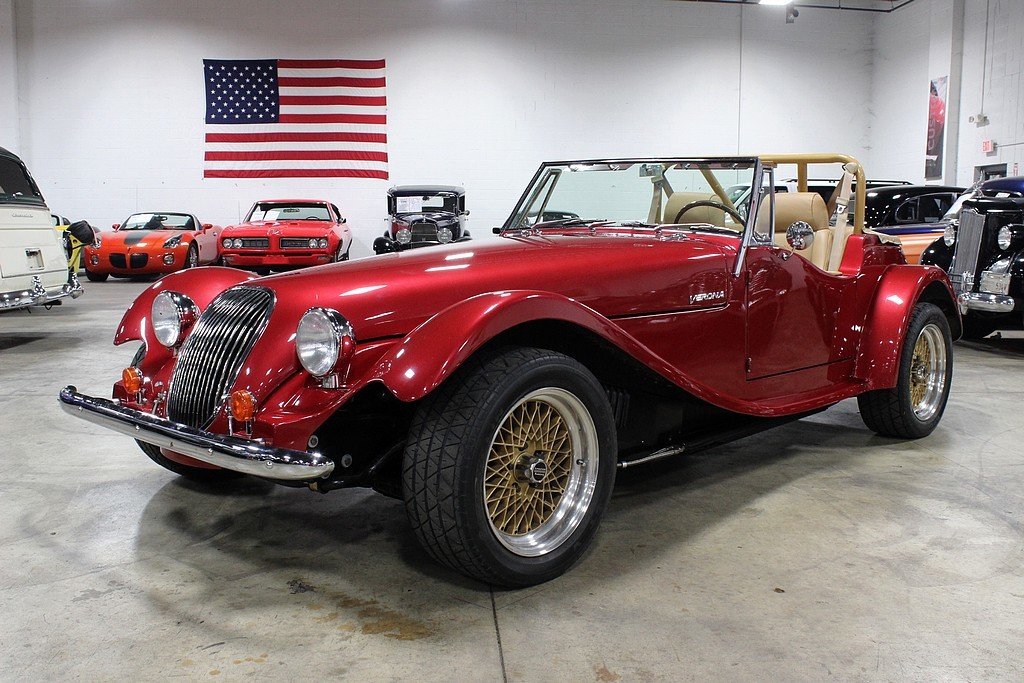 A Californian sports car of 1962, the Apollo was designed by Milt Brown, styled by Ron Plescia, and the bodies which were primarily coupes were made out of Italy. Much cleaner and longer, this vehicle was relatable to the MG-GT but even before the GT was released to the public, the Apollo had been styled and announced already. The first model ceased production in 1964 and although their body was beautiful, the original engine setup offered was less than reliable causing a big downturn in production due to lack of sales. Milt Brown and Ron Plescia returned in 1982 with their traditionally styled roadster aptly named the Verona. Now available as a well-fitted turn-key car or a kit for those who like to build, the vehicle was back with a new name and more modern touches. Many improvements were made and the body became much more relatable to a Morgan with its highline fenders and overall “victorian” look.

GR Auto Gallery is pleased to present this beautifully built and well-documented example of the 2005 Apollo Verona for your consideration. The kit was first purchased in 1989 by the current owner and became a labor of love immediately. With this being such a basic kit due to it being only the frame, body and parts weren't even painted, the time that had to go into it increased and was finally completed in 2005. The vehicle was professionally painted by a local shop in Lowell, MI where they sanded and painted it a beautiful Dark Red, assembled the body back to the frame and immediately sent it out for professional upholstery to be completed which was done in a luxurious tan leather and then fully inspected to clear safety requirements. This was finalized in October of 2005 and has been enjoyed since. With 6,330 miles, this vehicle hasn't been used or abused and comes to its next owner in great condition. Hosting a powerful 400ci small block Chevrolet bored out to 415ci, mated to its 4-speed manual transmission and with a 9” Ford rear end, this lightweight roadster does a lot more than look good. The Dart headers are ported and polished, a Griffin aluminum radiator is paired with a 16” fan, an Edelbrock RPM Air-Gap intake manifold was used along with a Edelbrock 750 CFM carburetor and Edelbrock fuel pump. The Sanderson exhaust manifold is ceramic coated and made out of stainless 2 ½ inch dual exhaust system with Super-Trapp 17” x 4” mufflers to give it a nice rumble and has all the availability to be adjusted. Also used is a set of Baer Racing 4-wheel disc brakes with Corvette calipers, custom frame roll bar installed, Hodgkiss suspension upgrade to front and rear with urethane bushings and an Air-Ride technology air springs on the rear, its not only fast but smooth. Also included with the purchase is the partially completed hardtop as shown in the photos. It's constructed of wood and fiberglass, and has lock down clamps for the body and windshield. A new pop-up sunroof for the hardtop is included, as are some materials that can assist the new owner with finishing the top. Plenty of other great features were used in the building of this very rare, very cool kit car and with multiple binders, piles of receipts and even photos taken throughout the process, it's a great find for anyone interested in unique and well-built cars! Call or email us today for more information on this sharp ride.
To see over 80 photos of this car, including under carriage please visit our website www.grautogallery.com