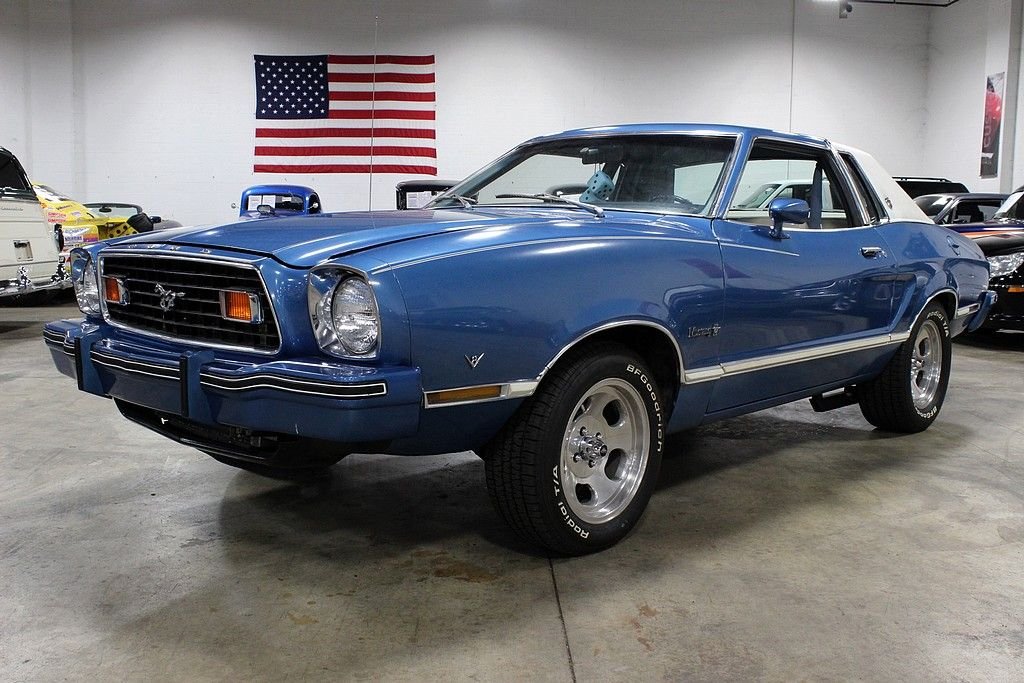 “The second generation Mustang was introduced in response to the growing demand for smaller, less extravagant cars during the embargo-induced fuel crisis of the 1970s. It was indeed the “right car at the right time” for the Blue Oval, selling more than a million units during its four-year run and being named Motor Trend's Car of the Year in its 1974 debut. The focus on fuel efficiency meant there was no option for a V-8 engine in '74 Mustangs, but by 1975 a very modest 140hp V-8 was again optional. In 1976, special appearance packages like the Cobra II offered various aesthetic items such as a simulated hood scoop, front and rear spoilers and cobra-themed graphics. The Mustang II's attractive all-new styling was influenced by coachbuilder Ghia of Italy, which had recently been acquired by Ford. It carried through the long-hood, short-deck theme of the original, and as Iacocca requested it came as a notchback and hatch-equipped fastback.” – Hagarty.com

This two-family, very original 1976 Ford Mustang II Ghia is a great example of what Ford was able to do in order to adjust their lineup to the different market base of this time. With many of its service being performed through one local shop we also have the luxury of seeing all the work done to it which exemplifies the quality of this fine ride! With upgrades performed including traction bars, shift kit, electric choke and electric fan, this vehicle is mostly as it sat the day it was built and has very low mileage and wear considering its age. This has also had an 8 inch posi-traction rear end added, 3.55 rear axle ratio, 2800 Stall converter, Kevlar shifting bands, nothing has been forgotten while making this a racer. With a professionally rebuilt engine, new lines, fuel cell and pump, this care runs on racing fuel and is ready to be ran fast! This model is powered by the 302 V8 gas engine which is topped with a 670 Holley 4-barrel carburetor and mated to its original 3-speed automatic which is in great running order for the next owner to enjoy. From the interior you find plush white leather seating and door panels in good condition matching its white half vinyl roof and still looks and feels luxurious as they intended with the upgraded Ghia package. With all the time left in the world, this vehicle sits with less than 1,500 annual miles as an average and is ready to be driven fast or admired while still! Come get a glimpse into the past with this wonderfully kept model or call us for more information before this great ride gets away!