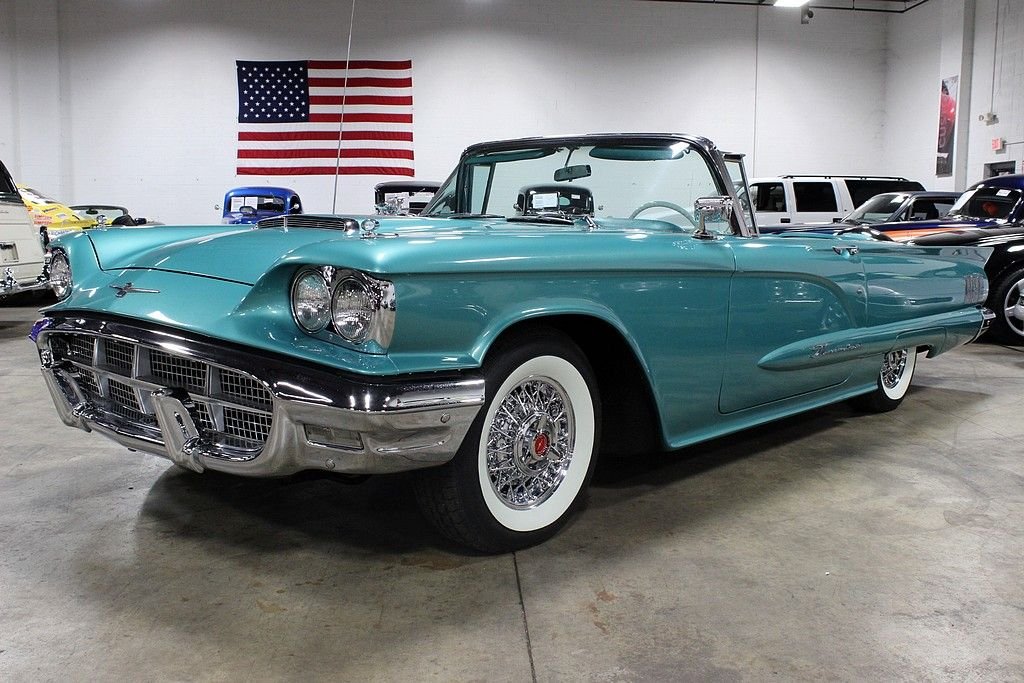 The Thunderbird began production in 1955 and only started with two seats and with a convertible top. This was very unlike the competition of that era such as the Corvette which was marketed much more like a sports car than the Thunderbird. Ford created an entirely new segment for marketing and was classified as a “Personal Car” which provided more room and luxury. By 1958 they had extended the model even further than before and added a second row of seats which became even more popular due to the convenience of space. This trend of growing the size of the Thunderbird continued and the model became much larger for several generations until 1977 as the market had changed and demanded more of a smaller sized vehicle. The earlier convertibles were had a true soft convertible top and would store directly within the trunk which not only was powered using hydraulic cylinders moving this up and down, but also had a very sleek look with no trace of a top when lowered. This required no boot to cover it and became quite popular.
This shining example of a 1960 Ford Thunderbird Convertible that comes with a wonderful binder containing its entire history is a pleasure for us to offer for your consideration. From the front to the back, inside to outside, the reconditioning of this vehicle was done for quality and not affordability! Originally purchased in Washington and built very near us at the Wixom, MI Ford Plant, this vehicle was responsibly owned by three more people and shows its major reconditioning being performed by a previous owner of a Ford dealership in the mid-80s. With everything from its original production broadcast tickets, letters written from one buyer to the next, original key and even copies of the original window sticker, there is no shortage of documentation or history for the next owner to really enjoy!
From the exterior of this vehicle you find many great features from the recently added Truespoke chrome wheels with American Classic tires to its fully functioning power top, this vehicle shows very well. An additional continental package put on the rear of the vehicle really adds to the style and flash of this vehicle and holds the spare within a color matched cover housed within. From the interior you see a plush leather trim as it was when originally built but with new material made to match as well. Wit features such as the power front seats, power windows, power top, AC and heat is all fully functioning and the nostalgia is in full effect when sitting in this comfortable ride! A great buy for those looking for a rich history in excellent condition and even better for those who want one to drive and enjoy!