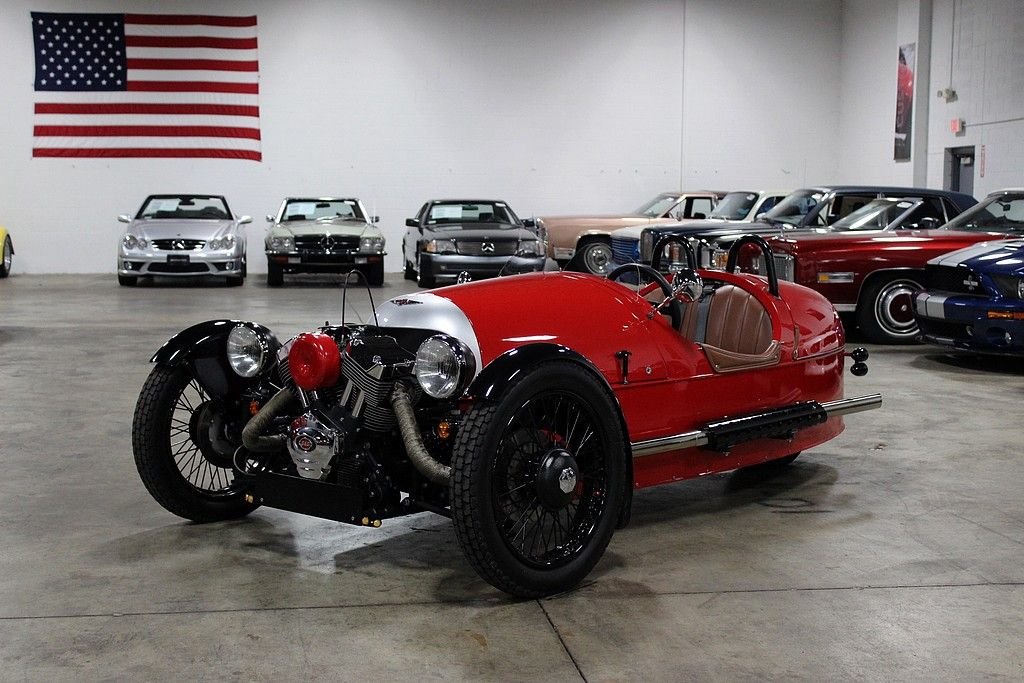 Too cool! That pretty much sums up this 2013 Morgan 3-Wheeler. Morgan reintroduced the 3-Wheeler to the world in 2011 at the Geneva Motor Show with great success as 850 orders were initially received with a schedule production of only 750 per year. Morgan had previously produced 3-wheeled vehicles from 1911-1952 and hit a home run once again at the New York International Auto Show when it was voted as the hottest car of the show. It was initially not going to be sold in the U.S. due to federal automobile regulations but it was then homologated as a motorcycle allowing it be sold as such.

All Morgan 3-wheelers since its reintroduction feature 1,983cc S&S motors matted to a 5-speed gearbox capable of propelling it from 0-60mph in 4.5 seconds onto a top speed of 115mph. They are relatively spartan vehicles but do feature seat belts, a removable steering wheel for easy entry, comfortable leather seating, push button start, and a small storage area. It looks striking with its red exterior over tan interior with black spoke wheels and was meticulously cared for and maintained.

It was sold new by franchised Morgan dealer Auto Europe in Birmingham, MI and has since traversed just over 6,500 miles. It is a one owner Morgan and comes with full documentation, 2 sets of keys, as well as a custom Montrose enclosed aluminum trailer for transporting. The trailer features a tilt loading system so no fussing with ramps as well as electric brakes and a single 3,500lb axle with aluminum wheels. With the ultra-low global production numbers, you'll surely be the only one in your town with one. Call now for further details!