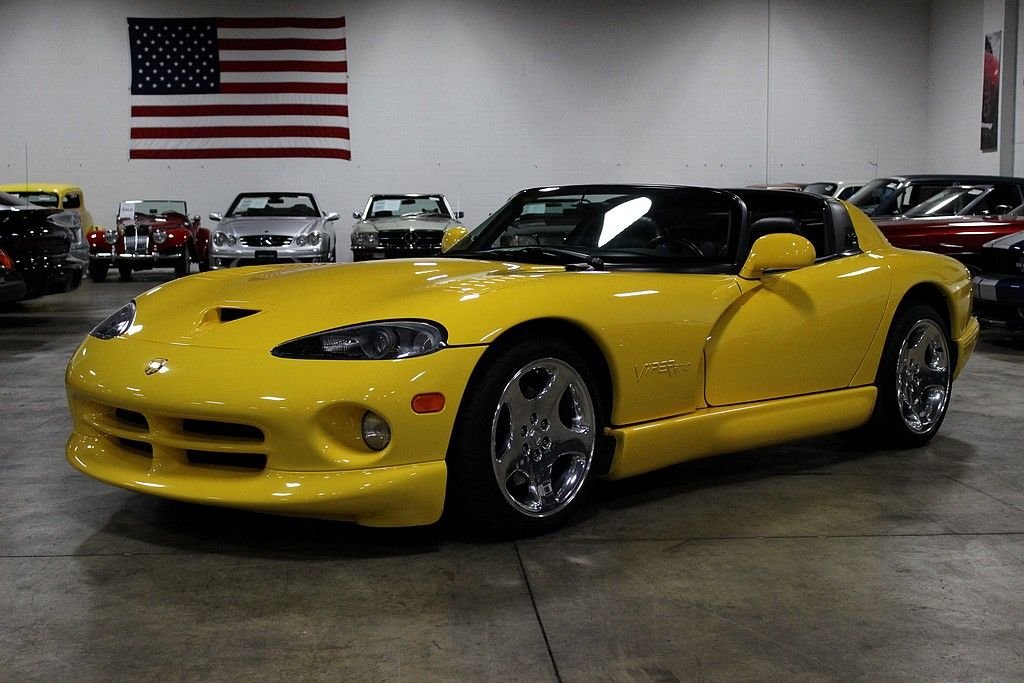 GR Auto Gallery is pleased to present this 2001 Dodge Viper RT/10 Roadster! This Viper is finished in yellow over a black leather interior and is in very good condition. The Viper was initially conceived in late 1988 at Chrysler's Advanced Design Studios. Chrysler President, Bob Lutz, suggested to Tom Gale at Chrysler Design that the company should consider producing a modern Cobra and a clay model soon came. The Viper appeared as a concept at the North American International Auto Show in Detroit in February 1989. Public reaction was so enthusiastic that chief engineer Roy Sjoberg was directed to develop it as a standard production vehicle.

Development began in March 1989 when Chrysler asked then subsidiary Lamborghini to cast a prototype aluminum block based on Dodge's V10 truck engine for sports car use. Official approval from Chrysler Chairman Lee Iacocca came in May 1990. One year later, Carroll Shelby piloted a pre-production car as the pace vehicle in the Indianapolis 500 race. In November 1991, the car was released to reviewers with first retail shipments beginning in January 1992.

The Gen 2 Viper was built between 1996-2002 and all though it still retained the massive 8.0L 488ci V10 engine under the hood, it now produced 450hp and 490lb.ft. of torque still mated to a 6-speed manual. The Gen 2 was also 60lbs. lighter, 25% stiffer, and received a thoroughly redesigned suspension which increased the lateral grip to 1.01g. These modifications also increase acceleration and made it capable of achieving 0-60mph in 4 seconds and blazing through the ¼ mile in 12.2 seconds at 119mph onto a top speed of 185mph. These second generation Vipers are still known for their raw power and but more so for their increased convenience such as having power windows, exterior door handles, and an easily attachable hardtop.

The current owner has cared for it since 2012 when it was purchased in Maryland from the original owner. It comes with the original books, manuals, and keys. With just over 23,000 original miles, this snake has plenty of street cruising ahead of it and is a great investment with high potential for appreciation in the future.