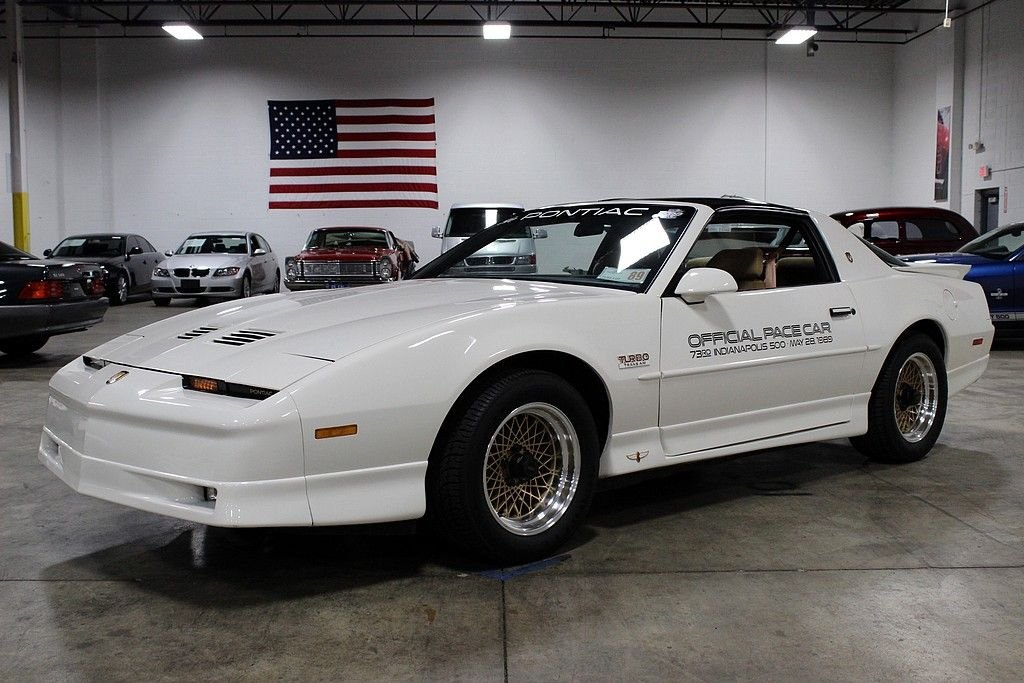 Rarity and exclusivity are just two of the adjectives used to describe this spectacular 1989 Pontiac Trans-Am 20th Anniversary Indy 500 Pace Car. Pontiac only made 1,555 and to crank up the rarity meter, this particular example also happens to be:

• One of the parade cars for the “Indy Pace-Car Special Promotion Vehicles” program. It is car #49.
• 1 of 187 made with T-Tops and a cloth interior.
• 3,977 original, one owner, miles.
• 100% fully documented with owners kit and all the original books, manuals, promotional material, and PHS documentation.
• T-Tops have never been off the car and the original T-Top bag and pads in as new condition are included.
• Original battery, magazine write-ups, and trophies are included.

As with all 1,555 examples, this one is finished in white but sports the very low production tan cloth interior. The exterior is accented by “Turbo”, “20th Anniversary”, and “Indianapolis Motor Speedway” badges along with the vinyl 73rd Indy 500 decals on each door. This is essentially a brand new car as it is in showroom condition and everything works. The current owner was a GM employee for a number of years and won the internal company lottery that awarded the opportunity to purchase one of the parade cars, in which he did, and has accumulated less than 4,000 original miles and many 1st and 2nd place trophies at shows over the years.

Under the hood is the hi-po 231ci turbocharged V6 engine from the Buick GNX complete with an intercooler and electronic fuel injection. It is matted to the original Turbo-Hydramatic 200-4R four-speed automatic transmission. The car also features the WS6 performance suspension consisting of independent front suspension with MacPherson struts, coil springs and anti-roll bar, live rear axle with trailing links and torque arm, four-wheel hydraulic disc brakes from the 1LE, and 16”x8” Aluminum wheels with P245/60ZR16 Goodyear Eagle performance tires.

As equipped, the new Trans-Am redefined the term “high performance” with 13-second quarter-mile times and top speeds exceeding 150 mph. It was the first unmodified car to pace the Indianapolis 500 in 1989. Originally priced at $9,000 over the cost of the 5.7-liter GTA and with just 1,554 other examples produced, including five test cars, this 20th Anniversary Indy Pace-Car Trans-Am remains one of the rarest Pontiac's ever assembled.
To see over 80 photos of this car, including under carriage please visit our website www.grautogallery.com