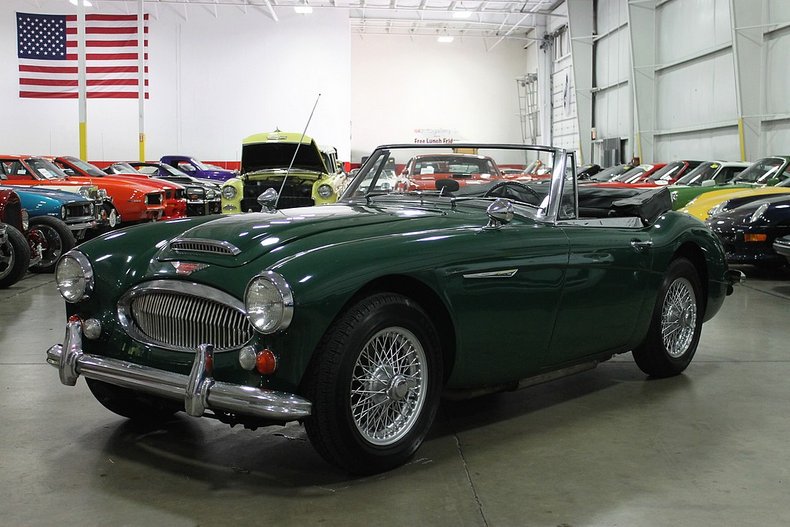 The final version of the of the “Big Healey” six-cylinder cars was the BJ8, introduced in 1963 and built during the last four years of production. The BJ8 proved to be the most refined Healey to date as roll up windows, a wood dash and a rear seat were added to the 3000 Series Austin Healey. The three liter inline engine boasted 150 horsepower aided by two SU HD8 Carburetors. The 4 speed manual transmission features an overdrive setting in gear 3 and 4. All this works together producing a top speed in excess of 115mph.

The lovely example offered here is finished in very appropriate British Racing Green over black interior with painted wire wheels. This two owner example has been in the hands of the second owner since 1974. The car is just out of his private collection and remains as very nice “driver” condition. Approximately 15 years ago, the body was disassembled and treated to a high quality repaint in its original British Racing Green. The frame, floors, and undercarriage are very nice and the engine compartment appears very original. The bumpers and bright-work remain original and fitting relative to the entire vehicle. With the exception of a newer carpet, the interior remains highly original and nice showing proper patina throughout. Mechanically the car runs out very well, pulls strong in every gear, shifts smoothly and brakes straight.

In short, this is a two owner, well kept, largely unmolested 1966 Austin Healy BJ8 MK III Roadster. These cars are highly sought after and with documented sales of highly restored examples in excess of $100, 000.00, the example offered here is an opportunity to acquire an icon in open air British Motoring.