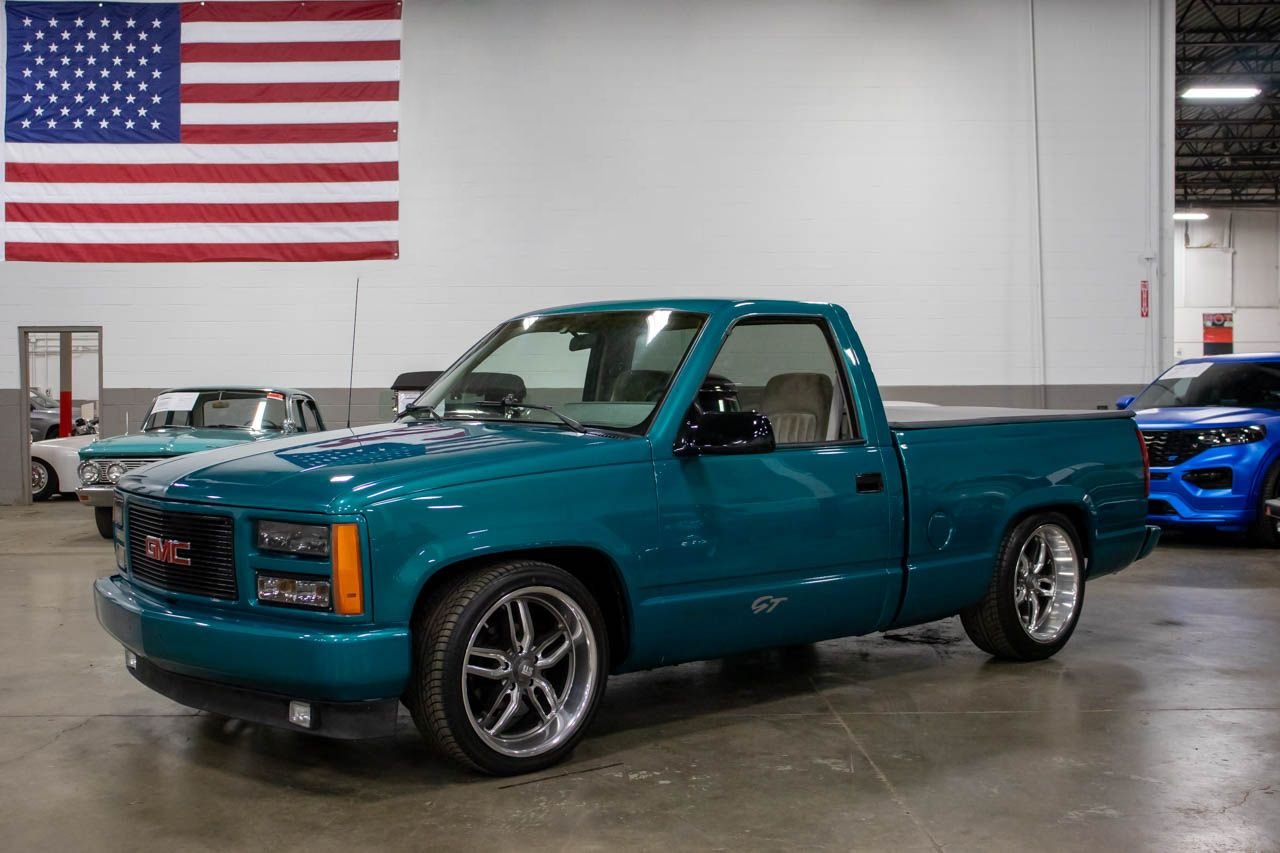 GR Auto Gallery is pleased to present this 1993 GMC Sierra 1500 GT for your consideration. This Sierra 1500 comes in a beautiful Bright Teal Metallic exterior over a clean Gray interior. Powering this GMC is a 350ci V8 paired to an automatic transmission with a 3.73 Rear end. This Sierra comes with some nice features such as; power steering, power brakes, front disk brakes, heat, a/c, and aftermarket Sony radio. This pickup also has some modifications such as; Mild cam, New exhaust, new U.S Mag wheels, and a recent paint job. Drive this one out of our showroom or have us assist with shipping it to you anywhere in the United States! Don't hesitate to give us a call with any questions or for more information.

The fourth-generation C/K was introduced in April 1987 for the 1988 model year. The first line not assigned a generational moniker by General Motors in nearly three decades, it is known by its GMT400 internal codename. Slightly smaller in cab dimensions than the Rounded Line generation, the fourth-generation C/K increased interior space over its predecessor. After trailing Ford and Dodge for over a decade, GM introduced the C/K in an extended-cab configuration. For nearly five years, the fourth-generation C/K was sold alongside its R/V series predecessor, as the crew cab pickup (which served as the basis of the Suburban SUV) was not released until the 1992 model year. In a branding change, the C/K nomenclature became exclusive to Chevrolet, as all GMC pickups became Sierras (GMC retained the C/K nomenclature for its internal model codes). Chevrolet introduced several specialized variants of the C/K series, including the work-oriented W/T 1500, off-road Z71, and the high-performance 454SS. Between one-ton trucks and medium-duty trucks, Chevrolet and GMC offered the C3500HD chassis cab for commercial use. In 1995, the fourth-generation C/K underwent a mid-cycle revision, adding a driver-side airbag (dual airbags became standard in 1998). In 1996, the extended cab was redesigned, adding a rear-hinged passenger-side third door. For the 1999 model year, to accommodate the introduction of the GMT800-chassis Chevrolet Silverado/GMC Sierra, the fourth-generation C/K was renamed as the Chevrolet Silverado Classic and GMC Sierra Classic. After the 2000 model year, C/K pickup trucks were discontinued. GM produced the heavy-duty C3500HD chassis cab as the final version of the C/K model family through the 2002 model year.