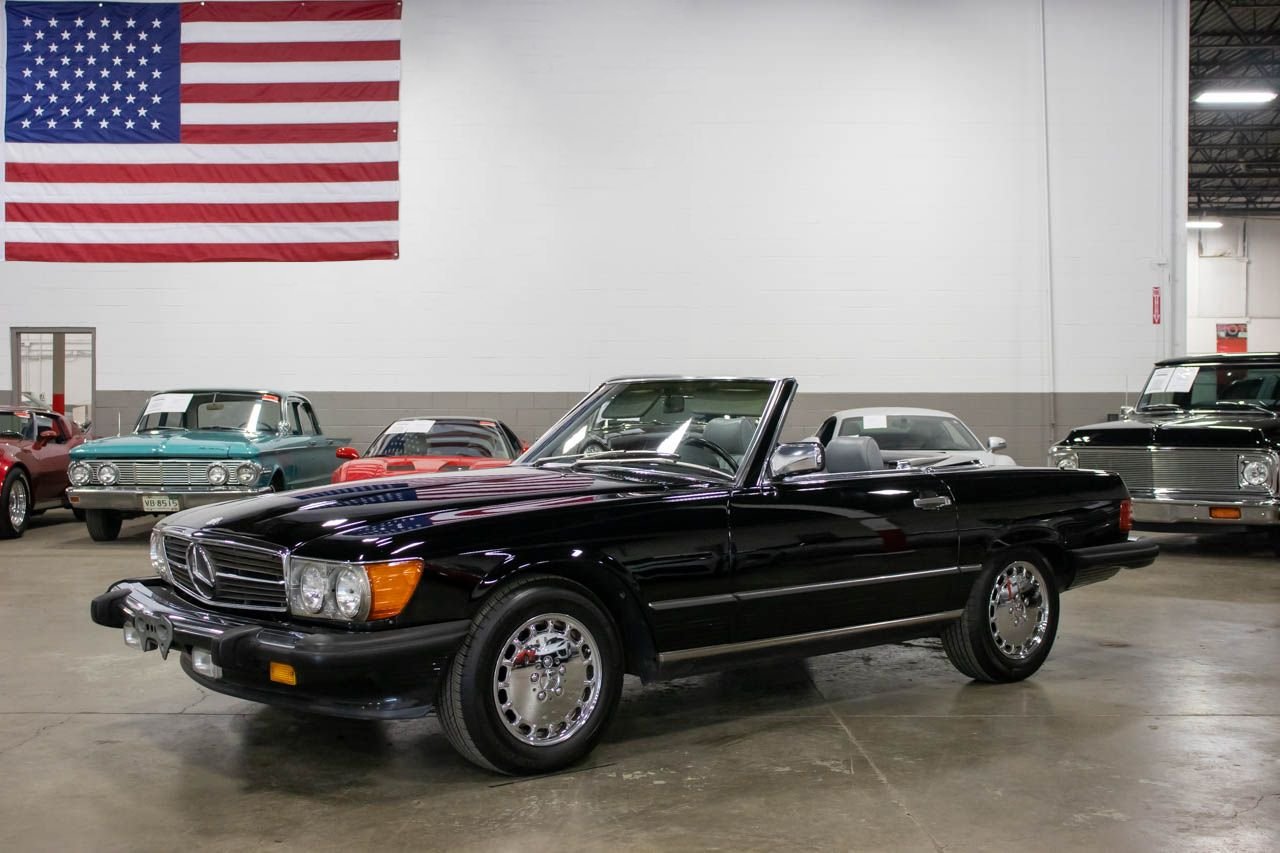 GR Auto Gallery is pleased to present this 1987 Mercedes Benz 560SL for your consideration. This Mercedes comes in a beautiful Black exterior with a Black convertible top & black hard top over a Gray interior. Powering this 560 is a 5.6L V8 paired with a smooth-shifting automatic transmission. This Benz comes with some great features such as; power steering, power brakes, disc brakes on the front and back, aftermarket Alpine radio, and an original Mercedes Benz first aid kit. The car is originally from California and was always maintained at a Mercedes dealership. Drive this one out of our showroom or have us assist with shipping it to you anywhere in the United States! Don't hesitate to give us a call with any questions or for more information.

In 1971, R107 was introduced with a new design language and safety features that spread to the subsequent Mercedes-Benz models. For the first time, the V8 engines were fitted to the SL-Class. Production from 1971 to 1989, R107 was one of the few longest-produced vehicles from Mercedes-Benz. R107 received a very minor update in 1972 with new rubber-edged wing mirrors from W116 and a major update in 1985 for the 1986 model year. The engine options were updated in 1980 for the 1981 model year with new aluminum V8 engines from W126 S-Class introduced in 1979 while the 2.8-liter six-cylinder inline engine carried over. It was updated again in 1985 for the 1986 model year with the new 3.0-liter six-cylinder inline engine from W124 and enlarged 4.2- and 5.5-liter V8 engines while the 5.0-liter V8 engine was carried over. The SLC Coupe is much rarer, produced from 1971 - 1981, like 280, 350, 380, and 450 SLC, and is expected to be worth considerably more soon and should be more collectible than the SL in the future due to its low production numbers. With the 450 SLC, 450 SLC 5.0, and 500 SLC models, Daimler-Benz took part in major rallies at the end of the 1970s such as the 30,000 km long Vuelta à la America del Sud (1977), the Safari Rally (1979), and the Bandama Rally. The R107 received its first update in 1985 with a deeper front air dam, a revised brake system with larger disc and four-caliber brakes, a driver's side airbag (standard for the US market and an extra-cost option for the European market), and, for the European market, catalysator option. The 5-mph bumpers and four round sealed-beam headlamps fitted to the US models remained unchanged despite the revised US FMVSS regulations that allowed the 2.5-mph bumpers and form-fitting headlamps, starting with the 1982 and 1983 model years respectively. The US model received the third brake lamp mounted on the trunk in 1986.