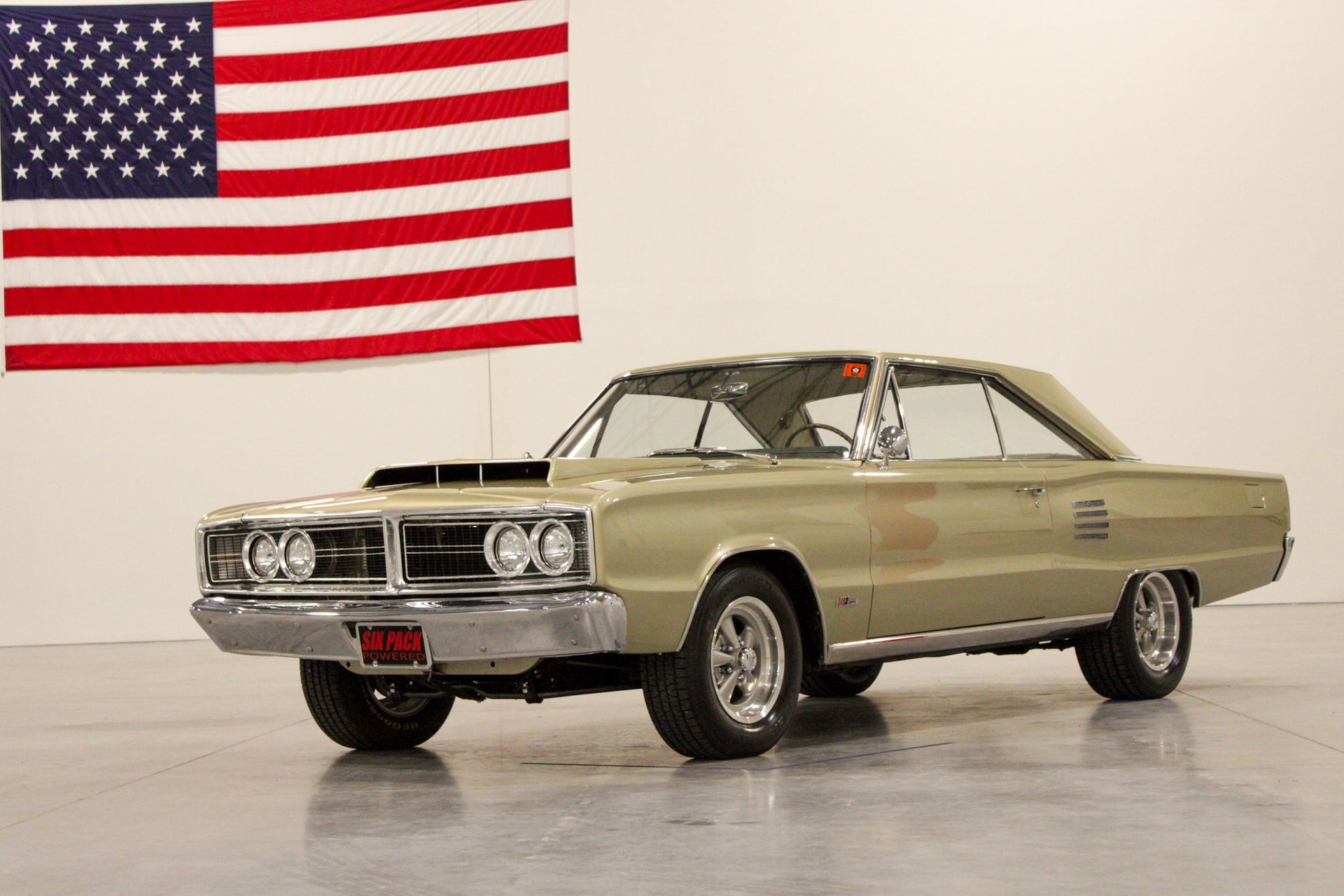 The GR Auto Gallery is pleased to offer this 1966 Dodge Coronet for your consideration. This vehicle is in remarkable condition due to the fact that it has been gone through with a fine tooth comb and upgraded where desired to make this Coronet a truly special example. Giving this vehicle tremendous acceleration is a 1969' 440 with six pack carbs and factory HP cast iron exhaust manifolds that was completely rebuilt in 2018 that the owner reports produces an estimated 465hp. The engine produces an aggressive exhaust note with assistance to a TTI Exhaust and dual Flowmaster mufflers. This Coronet sends the power to the rear wheels through a 4-speed A883 Transmission. The vehicle has an aggressive stance sitting on Cragar wheels that are equipped with BF Goodrich Radial T/A Tires of which the owner reports the 255/60 rear tires are recently replaced. The front brakes have been upgraded to factory disc brakes, drums are still equipped in the rear. The exterior was repainted in 2006 with the factory color of ZZ1 Gold Poly with a matching Citron Gold Interior, both of which present beautifully and show minimal wear and imperfections. This Coronet has received accolades at the “World of Wheels” show winner in its class and has received many other winnings. You will be hard pressed to find a nicer Coronet being offered today.

The Coronet is an automobile that was marketed by Dodge in seven generations, and shared nameplates with the same body shell with varying levels of equipment installed. Introduced as a full-size car in 1949, it was the division's highest trim line and moved to the lowest level starting in 1955 through 1959. The name was reintroduced on intermediate-sized models from the 1965 to 1976 model years. Other performance models included the "Superbee", and featured the 6.3 L Magnum, among other engine options. The nameplate "Coronet" is a type of crown worn by royalty. The Coronet reappeared for the 1965 model year as the intermediate sized B-body using a 117-inch wheelbase, continuing what had been the Dodge Polara, which was once again full-size. For 1965, Dodge sold slightly over 209,000 units, making the Coronet the most popular model sold by Dodge that year. Trim levels initially were base Coronet including a Deluxe version, Coronet 440, and Coronet 500. The base Coronet and Deluxe were available as two-door sedans, four-door sedans, and station wagons. For 1965 only, Dodge also sold 101 units of a modified wheelbase version of the base Coronet two-door sedans and 440 hardtops specifically for NHRA drag racing.