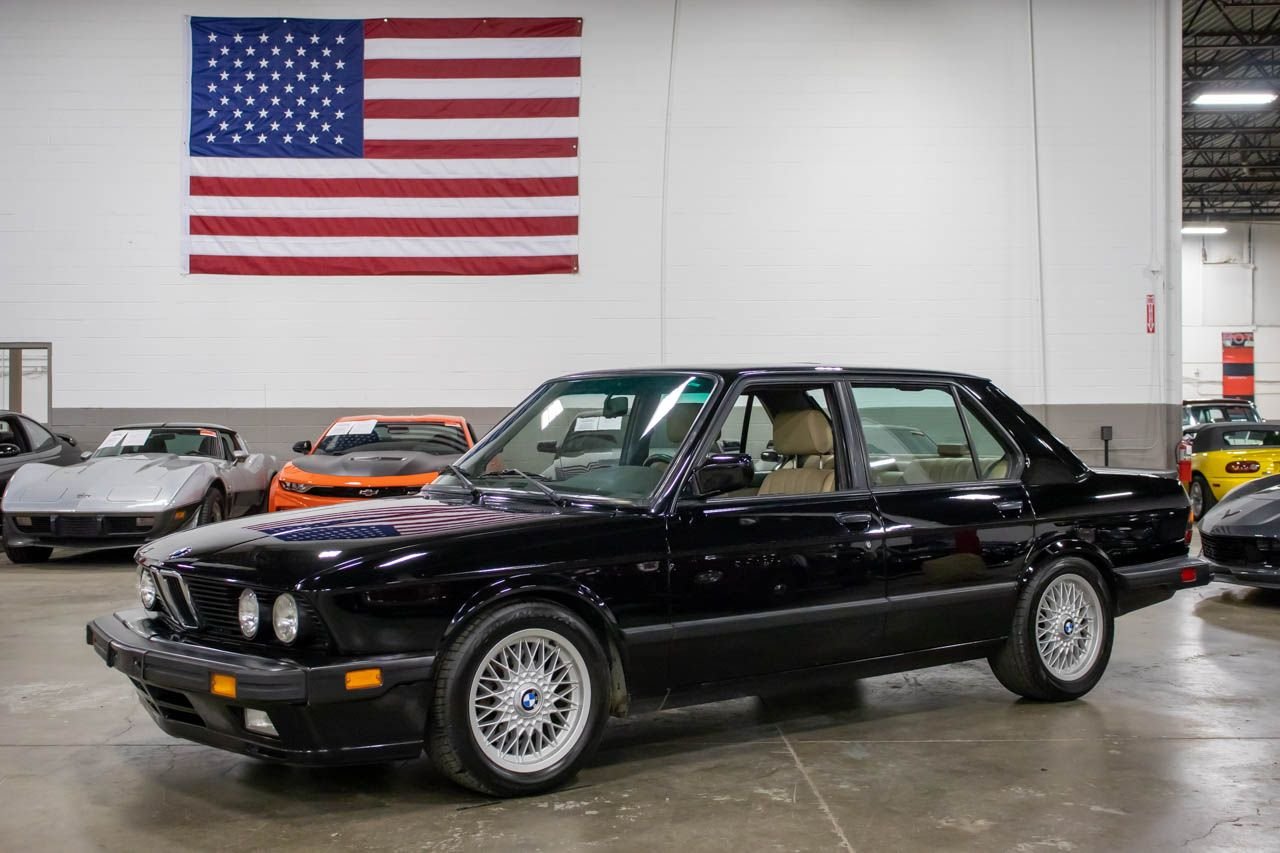 GR Auto Gallery is pleased to present this 1988 BMW E28 M5 for your consideration. This M5 comes in a black exterior paint complemented by a clean recently redone tan leather interior. Powering this E28 is a rebuilt 3.5 Liter inline-6 paired to a smooth-shifting 5 spend manual transmission. This M5 recently had a new power steering pump & hoses, new windshield, rebuilt instrument cluster, new tires, alignment, new alternator, Bluetooth radio, upholstered seats, new driveshaft, new transmission mounts, new OEM exhaust system, new spark plugs, DME repair, self-leveling delete and replaced with H&R lowering springs, Bilstein shocks, new water pump, and much more (a folder of receipts for this work will come along with the vehicle). If you are in the market for a clean example of an E28 M5 that has recently been gone through from top to bottom, look no further. Drive this one out of our showroom or have us assist with shipping it to you anywhere in the United States! Don't hesitate to give us a call with any questions or interest.

The official markets for the E28 M5 were Europe, Great Britain, the United States, Canada, and South Africa. The European and South African cars used the M88/3 engine which has a power output of 210 kW (286 PS; 282 hp). Cars sold in the United States and Canada used a detuned version of the M88/3 called the S38B35, which was equipped with a catalytic converter and has a power output of 191 kW (256 hp). Due to an extended production run that exceeded BMW's original forecast of production volumes, a class-action lawsuit was launched by owners in the United States. The result of this class action was that owners were given a voucher for US$4,000 in 1993. Production of North American specification M5 commenced in November 1986 and ended in November 1987. Aside from 96 cars which were assembled in kit form at BMW's Plant in Rosslyn, South Africa, all cars were assembled by hand in Germany. Assembly took place at BMW Motorsport's plant in Preussenstrasse in Munich prior to the 1986 factory summer vacation. Thereafter, the M5 production was moved to Daimlerstrasse in Garching where the remainder were built. Production of the M5 continued until November 1988, almost a year after BMW had ceased production of regular E28 models. With a total production of 2,241 units, the E28 M5 remains among the rarest regular production BMW Motorsport cars – after the M1 (456 units), M5 (E34) Touring (891 units), and the 850CSi (1,510 units).