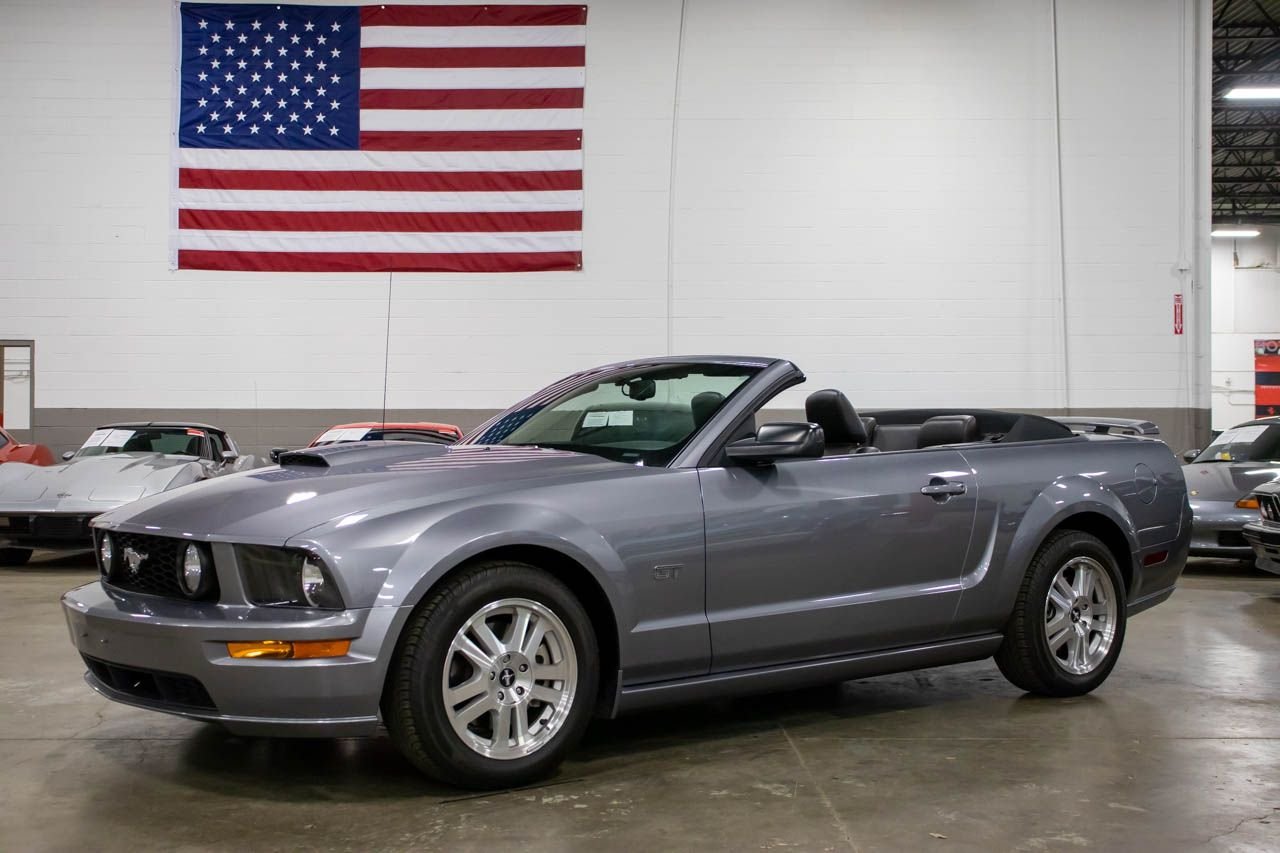 The GR Auto Gallery is pleased to present this two-owner low mile 2007 Ford Mustang GT convertible for your consideration. Powering this 16,677-mile Pony is a 4.6 Liter V8 motor paired to a stout 5 Speed Manual transmission. This GT Comes in a Tungsten Gray Clearcoat Metallic paint job complemented by a new clean black interior and matching soft top. This Mustang has been babied its whole life never driven in the rain or snow and always being stored inside. This Mustang has gotten an oil change every summer and still is even on the original tires. Please call or email us for more information.

Ford introduced a re-designed 2005 model year Mustang at the 2004 North American International Auto Show, codenamed "S-197", that was based on the new D2C platform. Developed under the direction of Chief Engineer Hau Thai-Tang, a veteran engineer for Ford's IndyCar program under Mario Andretti, and exterior styling designer Sid Ramnarace,58 the fifth-generation Mustang's styling echoes the fastback Mustang models of the late-1960s. Ford's senior vice president of design, J Mays, called it "retro-futurism." The fifth-generation Mustang was manufactured at the Flat Rock Assembly Plant in Flat Rock, Michigan.
For the 2005 to 2010 production years, the base model was powered by a 210 hp (157 kW; 213 PS) cast-iron block 4.0 L SOHC V6, while the GT used an aluminum block 4.6 L SOHC 3-valve Modular V8 with variable camshaft timing (VCT) that produced 300 hp (224 kW; 304 PS). Base models had a Tremec T5 5-speed manual transmission with Ford's 5R55S 5-speed automatic being optional. Automatic GTs also featured this, but manual GTs had the Tremec TR-3650 5-speed.59
The 2010 model year Mustang was released in the spring of 2009 with a redesigned exterior — which included sequential LED taillights — and a reduced drag coefficient of 4% on base models and 7% on GT models.60 The engine for base Mustangs remained unchanged, while GTs 4.6 L V8 was revised resulting in 315 hp (235 kW; 319 PS) at 6000 rpm and 325 lb⋅ft (441 N⋅m) of torque at 4255 rpm.61 Other mechanical features included new spring rates and dampers, traction and stability control system standard on all models, and new wheel sizes.