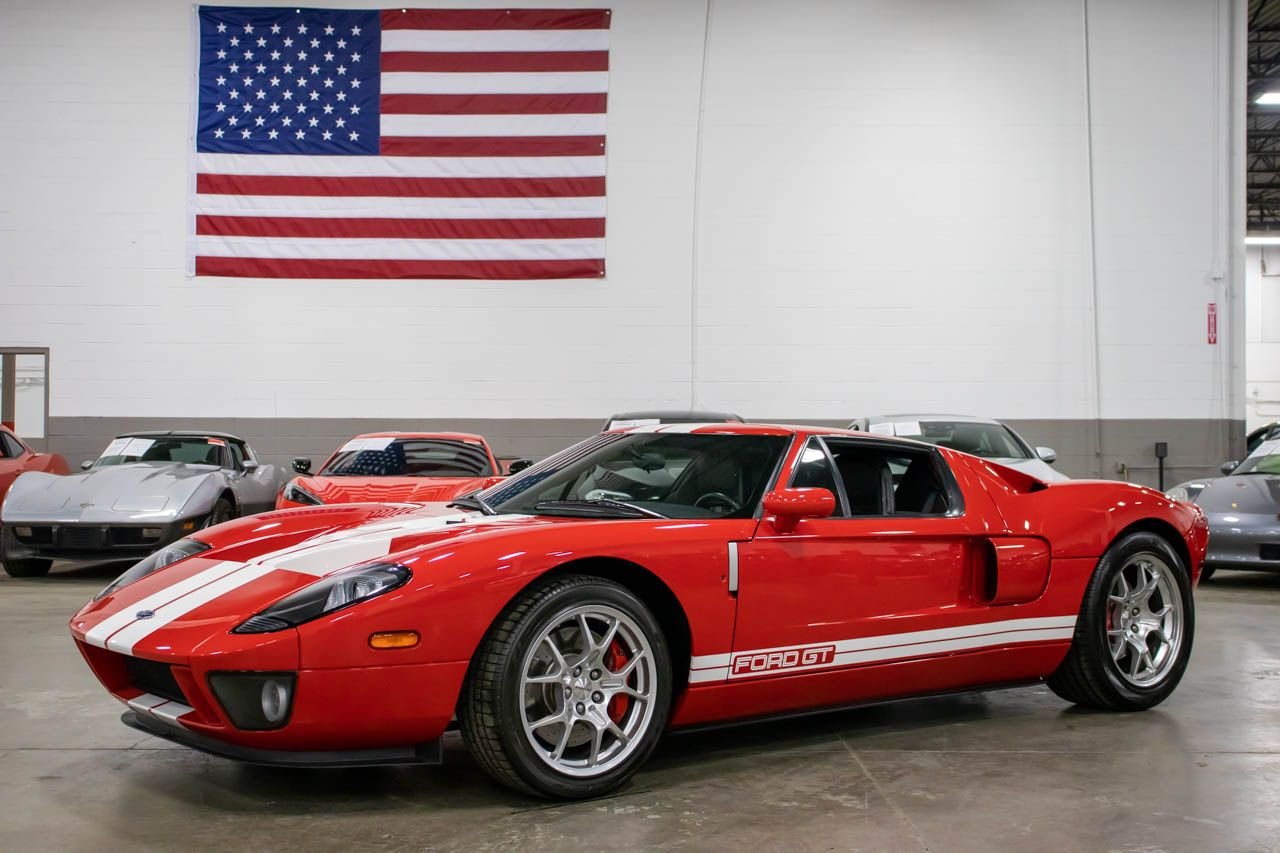 The GR Auto Gallery is pleased to present this beautiful 2005 Ford GT for your consideration. Powering this beast is a 5.4 Liter supercharged V8 paired to a Ricardo 6-speed manual transmission is fitted featuring a helical limited-slip differential. Power output is 550 hp (410 kW; 558 PS) at 6,500 rpm and 500 lb⋅ft (678 N⋅m) of torque at 4,500 rpm. This GT comes in a red paint job with white stripes making it 1 of 765. This GT comes with all the service records, clean carfax, no paintwork, and is a 2 owner car. The only thing that has been changed on this GT is a rear bumper delete making this GT look more like the GT40 it was designed after. So if you are in the market for something to take your collection to the next step or just love Ford GT's this is the car for you! Please call or email us today for more information.

The Ford GT began life as a concept car designed in anticipation of the automaker's centennial year and as part of its drive to showcase and revive its "heritage" names such as Mustang and Thunderbird. At the 2002 North American International Auto Show, Ford unveiled a new GT40 Concept car. Camilo Pardo, the then head of Ford's "Living Legends" studio, is credited as the chief designer of the GT and worked under the guidance of J Mays. Carroll Shelby, the original designer of the Shelby GT 500, was brought in by Ford to help develop the GT; which included performance testing of the prototype car. While under development, the project was called Petunia.
The GT is similar in outward appearance to the original GT40 but is bigger, wider, and most importantly 4 in (100 mm) taller than the original's 40 in (100 cm) overall height; as a result, a potential name for the car was the GT44. Although the cars are visually related, structurally, there is no similarity between the modern GT and the 1960s GT40 that inspired it. After six weeks from the unveiling of the GT40 concept, Ford announced a limited production run of the car. Three pre-production cars were shown to the public in 2003 as part of Ford's centenary celebrations, and delivery of the production version called simply the Ford GT began in the fall of 2004.
As the Ford GT was built as part of the company's 100th-anniversary celebration, the left headlight cluster was designed to read "100"