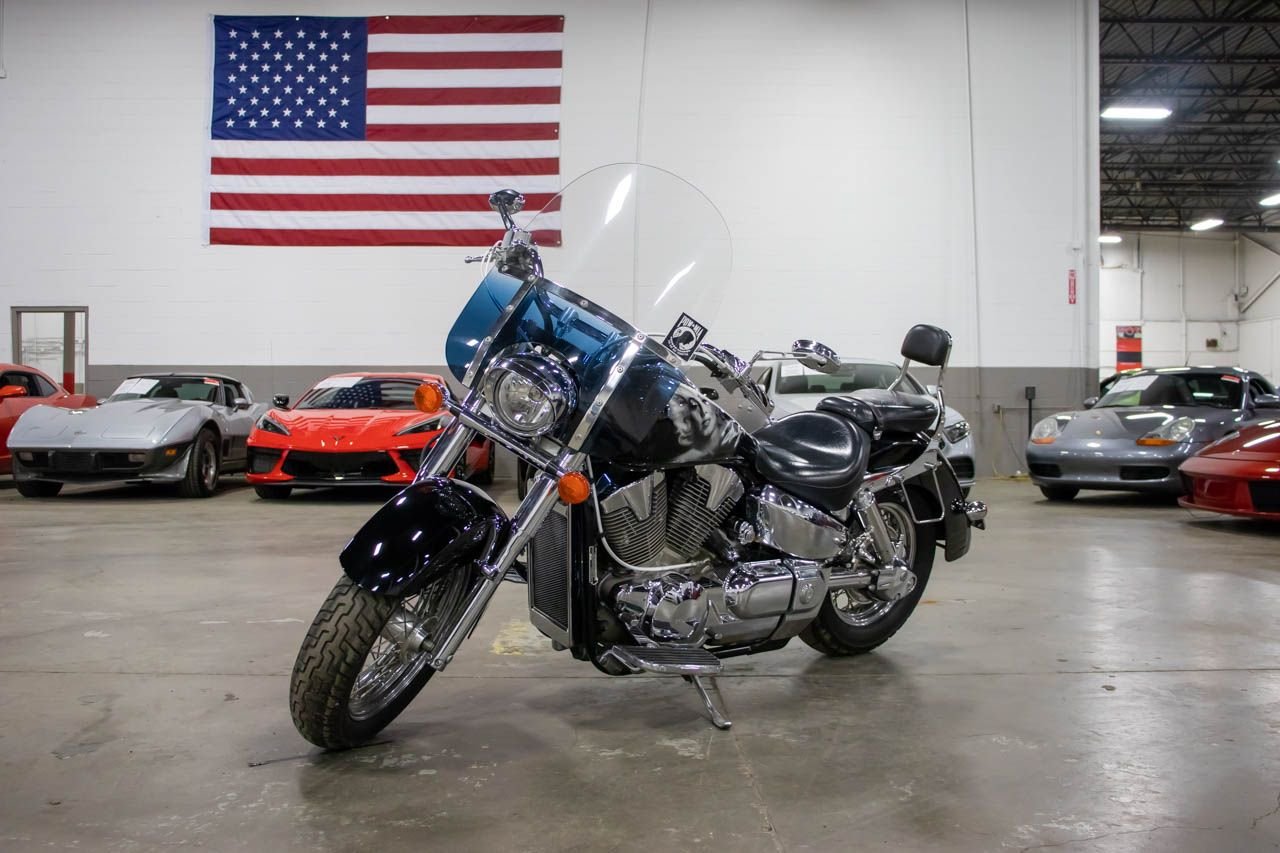 The GR Auto Gallery is pleased to present this 20003 Honda VTX1300 for your consideration. This bike comes with an airbrushed Mural of Marilyn Monroe on the gas tank and rear fender. In 2002 Honda made the VTX1300S available, as a 2003 model, with an all-new 1,312 cc (80.1 cu in) liquid-cooled V-twin engine in traditional cruiser bodywork, rolling on spoked wheels. It sold quickly, and by the close of 2003 sales totaled almost 12,000 units.
In contrast to the VTX1800 line, VTX1300 bikes used standard unlinked brakes, with a single large front disk, 336mm in diameter. The rear brake was a 296mm disc.
Although it was similar to 1800, 1300 was not the same engine with a smaller bore or shorter stroke, but a new design. The 1300 engine used a 38 mm constant velocity carburetor unlike the fuel-injected 1800. The single carb had a manual choke for cold starts and was heated by engine coolant to improve cold-weather operation. The configuration of the new powerplant was the same liquid-cooled overhead-cam 52-degree V-twin layout as its larger sibling, but the VTX1300 engine was designed around a single-pin crankshaft, unlike the 1800s dual-pin crank. As a result, the 1300 required dual two-axis primary counterbalancers to control engine vibration. The VTX1300 engine had a cable-operated clutch, instead of the hydraulic clutch of the VTX1800. The 1300 engine used an air injection system and catalytic converters, similar to the bigger engine, as well as a lean fuel-air mixture to control emissions.
The VTX1300 line employed the same two-into-two exhaust system across the board, as opposed to the model-specific two-into-one system of the VTX1800C. In a road test on the Motorcycle USA website, editor Ken Hutchison observed that the VTX1300C had an "extra-muffled exhaust note that may be politically correct but it really detracts from the Big Twin experience potential buyers might be looking for." Nevertheless, Motorcyclist magazine's Art Friedman opined that the VTX1300 "sound is classic V-twin", and that the bike had more responsive handling as well as a smoother drivetrain than its 1800cc lookalike.
VTX1300 bikes came with the least possible instrumentation, one large analog speedometer (with a digital odometer) in a nacelle on top of the fuel tank, unaccompanied by so much as a clock or fuel gauge. The 2004 VTX1300S was joined by the lighter and shorter VTX1300C Custom with cast-alloy wheels, a drag-style handlebar, and without the floorboards and heel-and-toe shifter of the S model. The new C model also sold in large numbers in its first year, upwards of 11,000 units