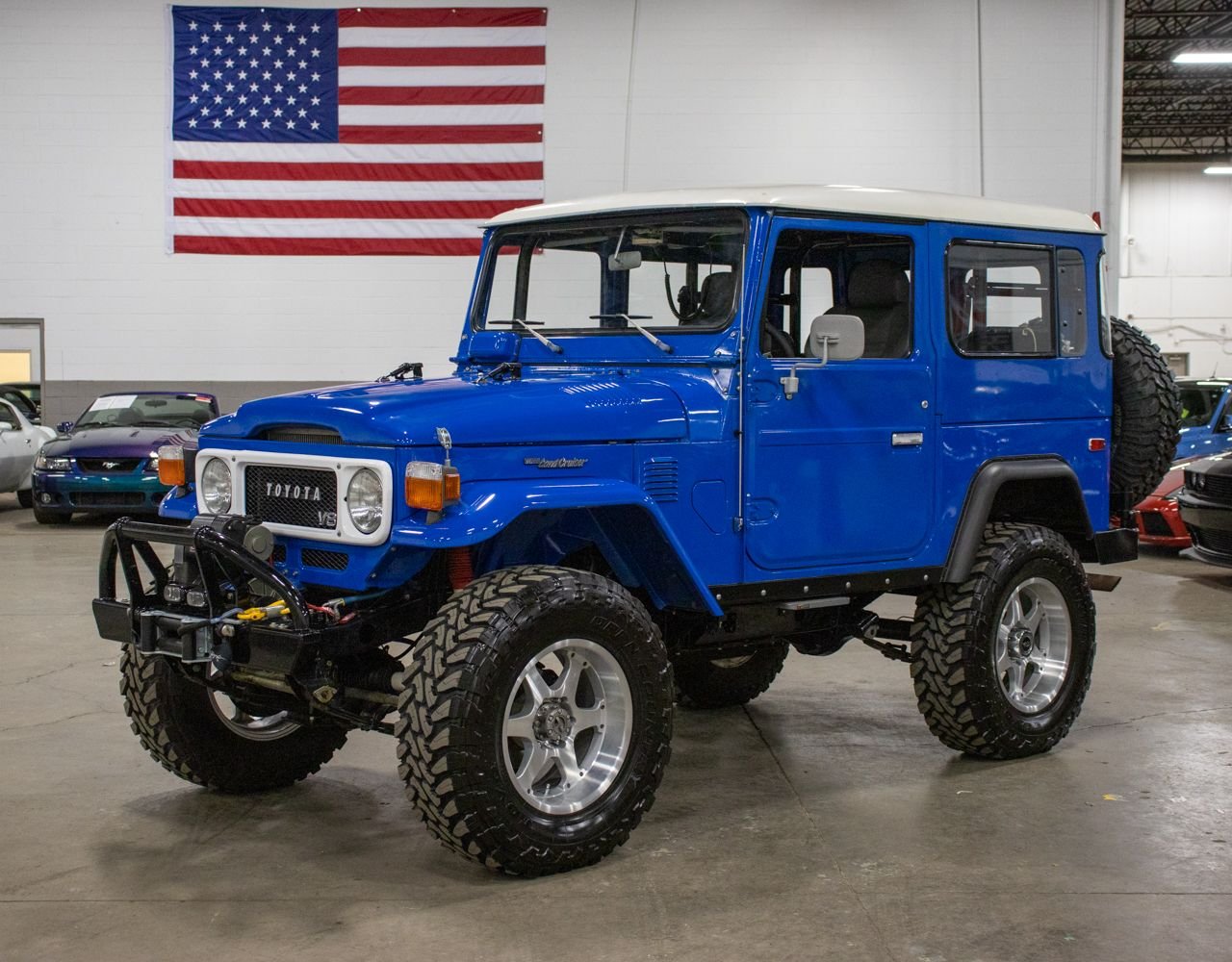 GR Auto Gallery is pleased to present this Late Model 1979, "Show" quality, rust-free, 100% better than the restored vehicle is ready for the trail, the highway, or the car show. Almost every part, nut, bolt, bearing & gasket has been replaced or the old ones have been painstakingly cleaned, sandblasted, painted, or powder-coated. I am confident this is one of the finest bespoke Toyota Land Cruiser FJ40's in the World - You can EAT off the powder-coated frame rails and the paint is a beautiful mirror finish. You'll notice my reflection in some of the pictures, it is an amazing paint job.
Here are is a list of NEW upgrades & options:
• GM Crate 6.0 L Vortec 6000 V8
• NV4500 GM 5 Speed
• Advance Adapter Atlas II Twin Stick Transfer Case
• ARB Air Lockers front and rear
• Alloy 4 Core Radiator
• 4 Wheel Discs Brakes
• SkyJacker Shocks
• 3” BTB Spring and shackles/bushings
• 20+ Gallon BTB Fuel tank and system
• Too much to list. Photos tell much
Frame—This Cruiser has been built from the ground up. The frame was stripped all the way down, sandblasted, polished to perfection, and powder coated black.
Ready for Show, the road or trail..

In 1950, the Korean War created a demand for a military light utility vehicle. The war put a Jeep on Japan's doorstep. The United States government ordered 100 vehicles with the then-new Willys specifications and tasked Toyota to manufacture them. The Toyota "Jeep" BJ prototype was developed in January 1951. This came from the demand for military-type utility vehicles, much like the British Land Rover Series 1 that was developed in 1948. The Jeep BJ was larger than the original U.S. Jeep and more powerful courtesy of its Type B 3.4-liter six-cylinder OHV Four-stroke petrol engine which generated a power output of 63 kW (84 hp; 85 PS) at 3,600 rpm and 215 N⋅m (159 lb-ft) of torque at 1,600 rpm. It had a part-time four-wheel-drive system like the Jeep. However, and unlike the Jeep, the Jeep BJ had no low-range transfer case. In July 1951, Toyota's test driver Ichiro Taira drove the next generation of the Jeep BJ prototype up to the sixth stage of Mount Fuji, the first vehicle to climb that height. The test was overseen by the National Police Agency (NPA). Impressed by this feat, the NPA quickly placed an order for 289 of these offroad vehicles, making the Jeep BJ their official patrol car.11
For the first two years, manufacture was exclusively to order and in small volumes.12 In 1953, however, regular production of the "Toyota Jeep BJ" began at the Toyota Honsya Plant (rolling chassis assembly). The body assembly and painting was done at Arakawa Bankin Kogyo KK, later known as ARACO (now an affiliate of Toyota Auto Body Company).11 The "Toyota Jeep BJ" Series was introduced in the following variants:
BJ-T (Touring),
BJ-R (Radio),
BJ-J (Cowl-chassis for a fire-engine).
The next year, the name "Land Cruiser" was coined by the technical director Hanji Umehara. "In England we had another competitor — Land Rover. I had to come up with a name for our car that would not sound less dignified than those of our competitors. That is why I decided to call it 'Land Cruiser'", he recalls.11 The name had already been used on the Studebaker Land Cruiser which was produced from 1934 to 1954. The 92 kW (123 hp; 125 PS), 3.9 L Type F petrol engine was added to the Land Cruiser range for the first time, originally only in the fire-engine chassis. The models were renamed: