Here at GR Auto Gallery, we love selling people their dream cars! But not everyone has that one car from their childhood that they aspire to own someday. Here’s a list of classic cars that we think are great for someone looking to purchase a classic vehicle but isn’t quite sure of what car is right for them.

The Volkswagen Beetle deserves a spot on this list for a plethora of reasons. Not only do they have a low initial cost, but the Beetle also has many other attributes that make it a fantastic first classic vehicle. With a production run of over twenty million examples, Beetles are readily available for under $10,000. Here at GR Auto Gallery, we love the Beetle for its cute styling and fun driving characteristics. Notable because of movies like “Herbie,” the Beetle is a recognizable vehicle that is likely to turn heads. But more importantly for gearheads like us, the Beetle is a blast to drive. It’s not fast by any means but they have a certain charm that is unlike any other vehicle. Combine that charm with the open-air driving characteristics of the cabriolet/convertible models, and it is an experience to remember. Another great highlight of the Beetle, especially for first time classic car owners, is the simplicity of the mechanical components. Everything on the Beetle can be worked on with relative ease and with simple tools. Parts are also readily available and affordable thanks to the seemingly countless examples that were produced. 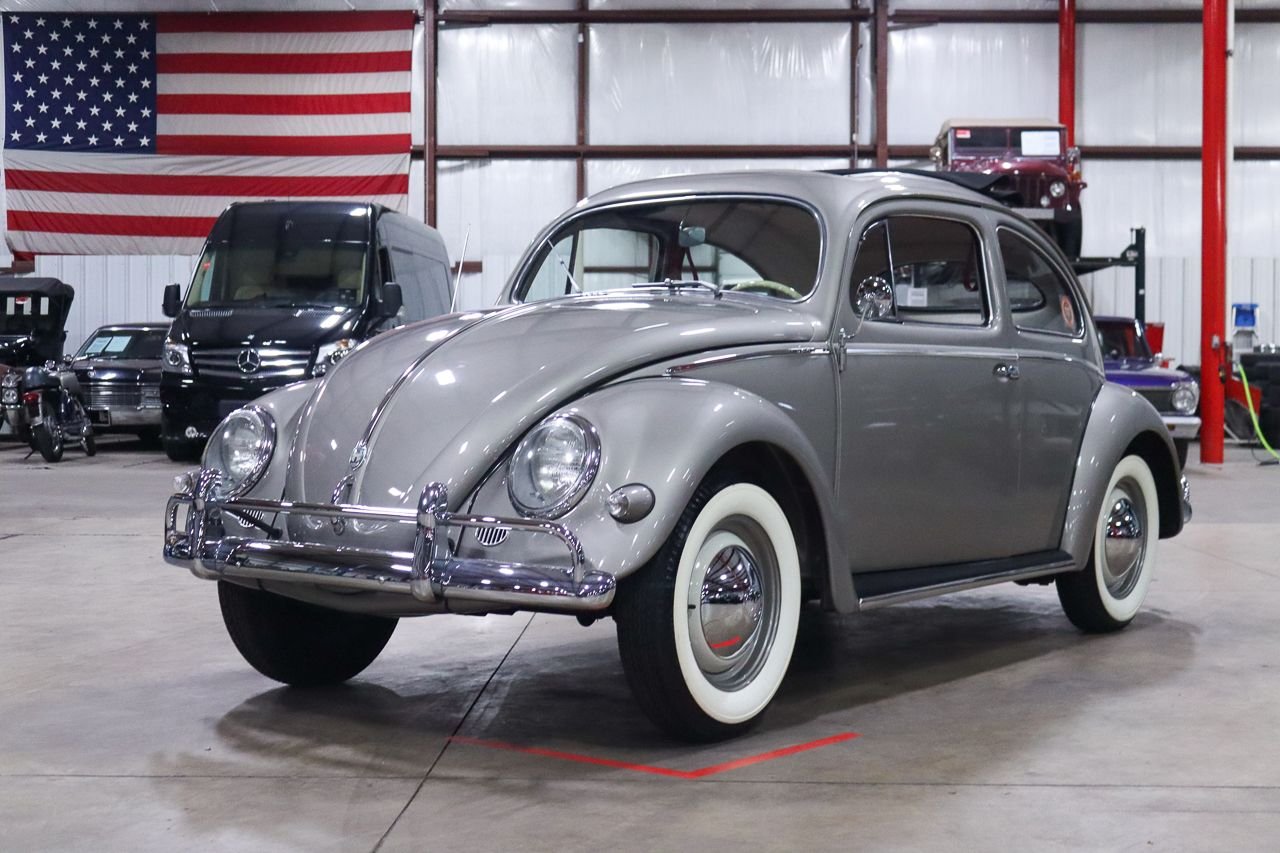 Another great classic vehicle for a first-time owner is the third generation Chevrolet Corvette. Sold between the 1968 and 1982 model years, the third-generation Corvette (C3 Corvette), is a true classic American sports car. As one would hope with an American sports car, the C3 ‘Vettes were only offered with a good ol’ V8. Engine options ranged from 305ci to 427ci but the most popular variant was the 350ci motor. Offered in both a manual and automatic transmission, there is a C3 Corvette for everyone and at every price point. We sell many of these vehicles every year and love them for their exterior styling. An interesting feature of this generation of Corvette was that the body was made from fiberglass meaning that the body will not rust. (We do advise all people to inspect the underside of any vehicle they are considering purchasing to confirm that the underside has not been completely rusted out. At GR Auto Gallery, we make sure to take underside photos of all our vehicles so that our buyers can be as informed as possible before making a purchase.) The Corvette also provides a thrilling experience behind the wheel. While certain variants aren’t the fastest thing out there, the 427ci engine produced over 400 horsepower and is a rocket. Regardless of the engine variant, the third-generation Corvettes have great handling and a very retro interior. These vehicles also have a large aftermarket support for both cosmetic and performance upgrades in addition to being relatively simple to maintain. 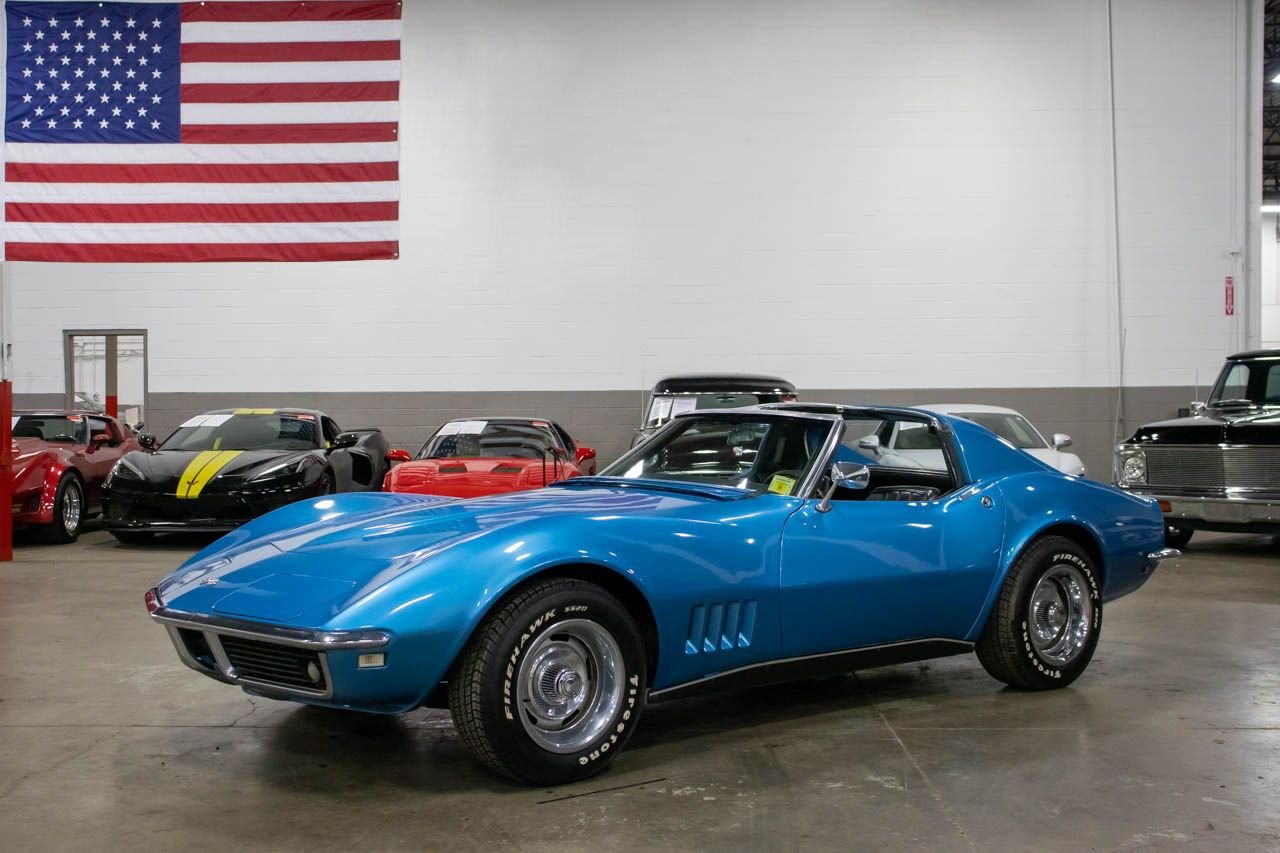 What’s another vehicle that has placed itself into the hearts of many Americans? The Jeep CJ-5. The CJ-5 was produced for nearly three decades and changed the off-roading world forever. CJ-5s are found at a variety of prices with some quality examples still being found for under $20,000. With their early beginnings as a military vehicle, the Jeep lineup has proven its dependability and all-terrain capabilities. Think about the great experience you could have blazing through two-tracks dodging obstacles with your buddies. There’s also a community of Jeep owners in nearly every major metropolitan area so if you don’t have other mud-loving, technical trail riding, or beach cruising buddies, you’re sure to be able to find some near you. Like the other vehicles on this list, there are plenty of parts available for classic Jeeps and they are relatively simple to work on as well. If looking for something newer, the Jeep CJ-7 is another great first classic vehicle. 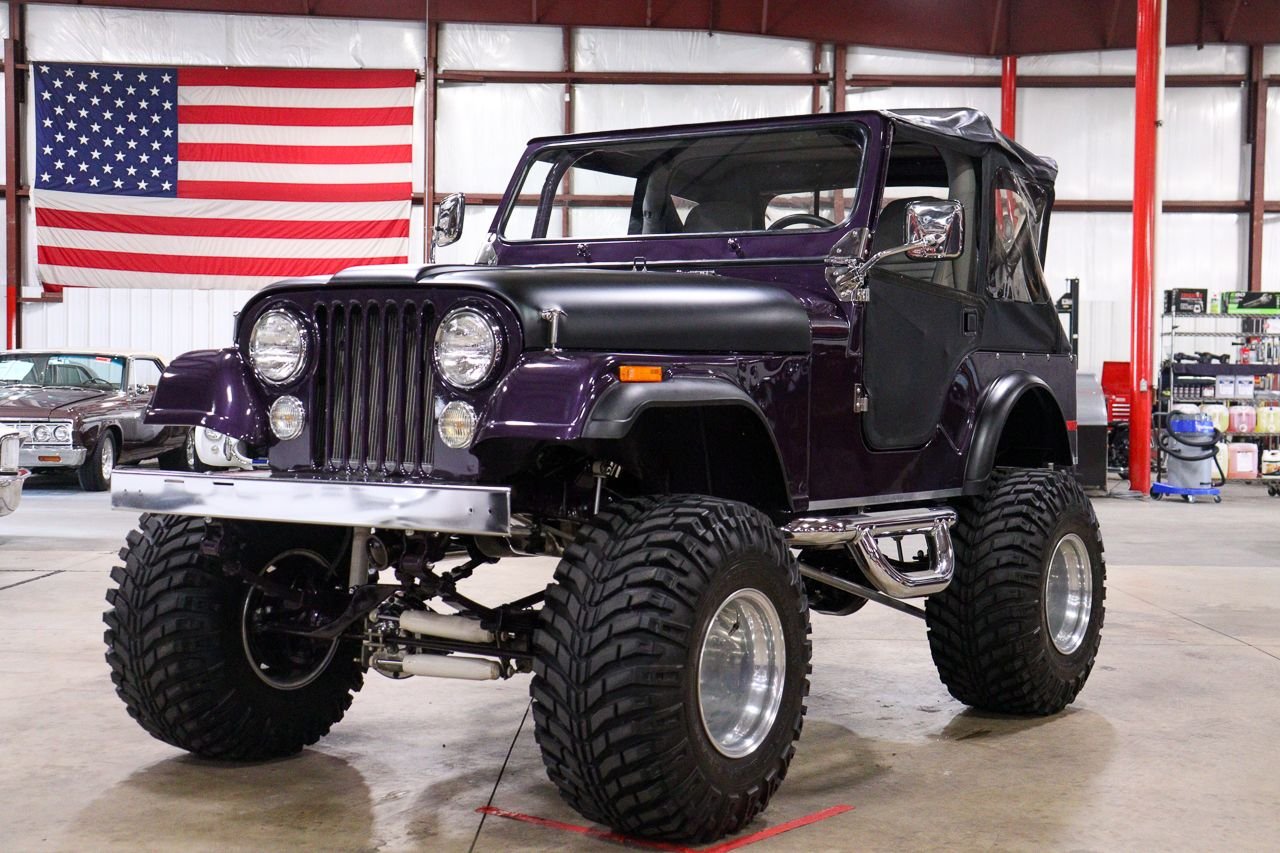 The Mercedes-Benz Super Light series (SL), specifically the R107 generation, is a wonderful sportscar that is plentiful here in the United States. Manufactured between 1971 and 1989, these classic European sports cars were fitted with a few different engine options meaning that in the used car market there are examples at nearly every price point. The 280SL was offered from ‘74-’85 with a 2.8L inline-6 motor that produced 182 horsepower. This variant had the smallest motor out of the lineup. For those wanting a bit more “umph” when the petal hits the floor, the 560SL is a great option. With its 5.6L V8 motor, the 560SL pumped out a hefty 227 horsepower which is still a respectable number especially when paired with the 287 lb-ft of torque the motor produced. In between these models was the 380SL which was fitted with, as you may have guessed, a 3.8L V8. All examples came with smooth shifting automatic transmission making these vehicles great for someone looking to experience a sportscar without having to worry about rowing their own gears. Another great highlight of the SL line from Mercedes-Benz is the convertible driving experience. When looking for an example of a Mercedes-Benz SL, one should look for an example with a good condition soft top and ideally a factory removable hardtop. Regardless of the type of convertible top the SL is accompanied by the open-air driving of these classic European sportscars is sure to put a smile on the drivers’ face. Not only do the SLs have great driving characteristics, strong motors, and easy availability on the used market, the SL also has a truly timeless appearance. If you’re considering purchasing a classic European sportscar, looking to the next generation SL is another solid option as they feature more modern features and updated styling. 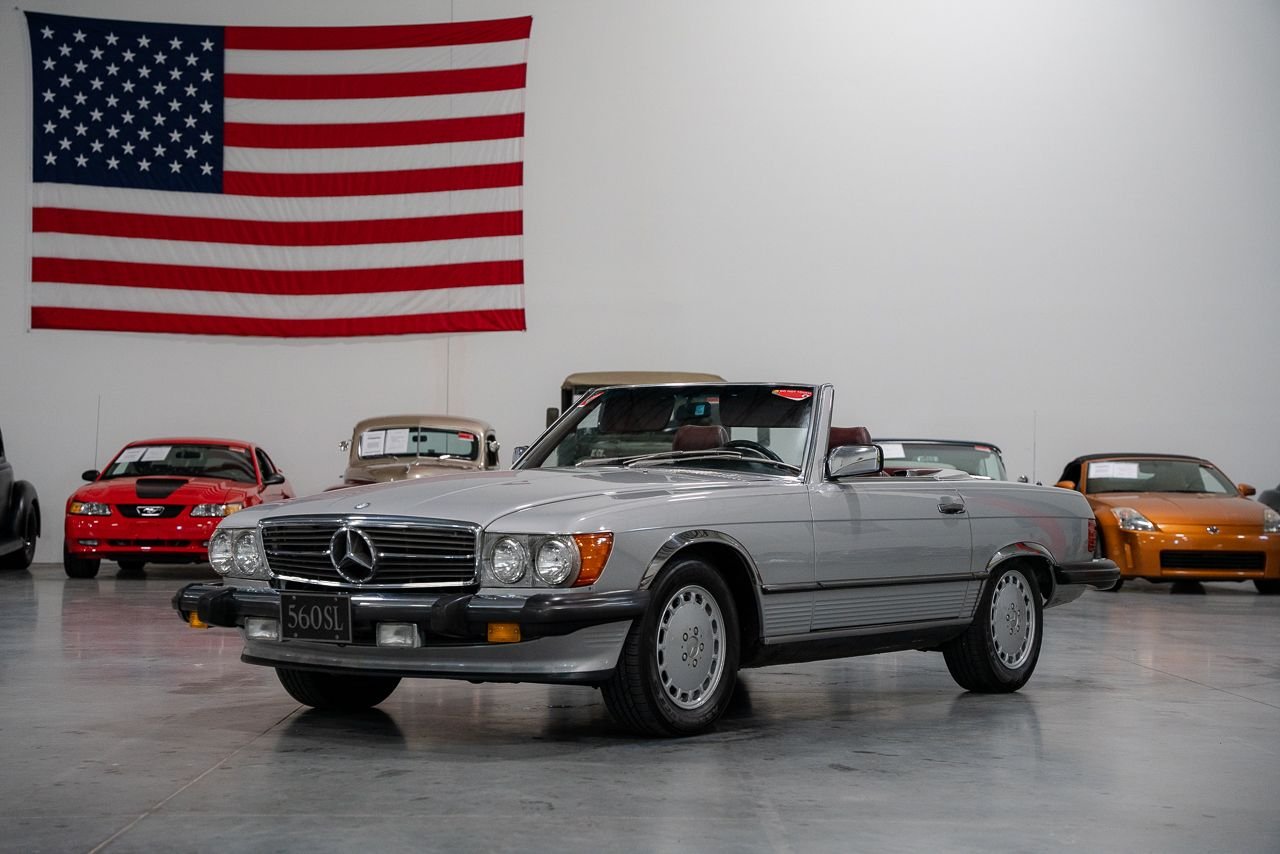 If searching for something more unique, the Datsun (Nissan) 240Z could be a great option. These Japanese sportscars may not instantly come to mind when thinking of classic vehicles, but they deserve a spot on this list thanks to their impressive handling, fun motors, and timeless styling. The 240Z was released as a response to England’s MGB GT and was offered with either a 2.0L inline-4 or 2.4L inline-4. Mated to these motors was commonly a manual transmission although automatic examples can be found as well. The lightweight nature of this vehicle combined with the previously mentioned impressive handling make for a great driving experience that really shines through on twisty back roads. While they may not have tons of power, the raw driving characteristics more than make this car worth the money. Additionally, these vehicles in good condition continue to rise in value especially as Japanese cars are becoming more popular by the day. 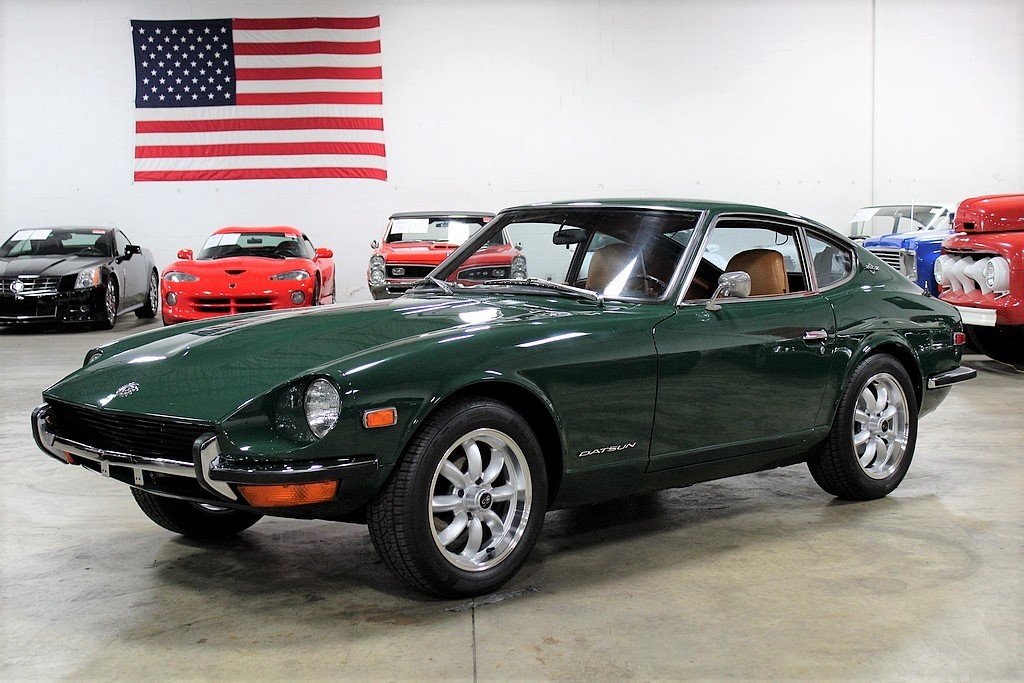 Each person has their own reasons to buy a classic car so this list may not include the right vehicle for your personal preferences and that’s okay! Classic American muscle cars such as the Chevrolet Camaro, Ford Mustang, Dodge Charger, Chevrolet Nova, and many others can also be fantastic first classic vehicle purchases. Likewise, a quality original Miata or MG MGB would make for a good alternative to the 240Z. At GR Auto Gallery we want to help you get into your first classic vehicle and with 600+ vehicles in our inventory we are likely to have the right vehicle for you!